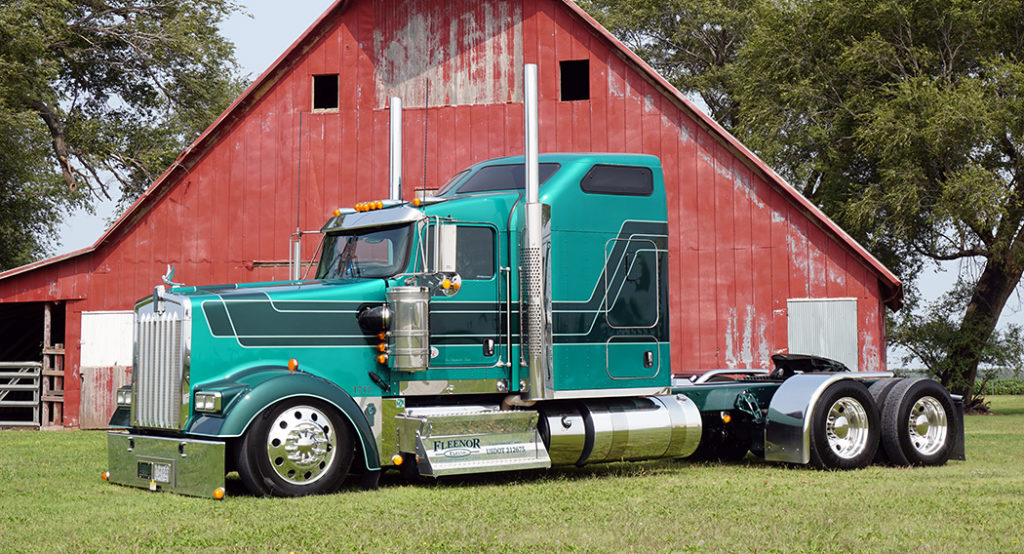 Life has a funny way of taking us on different paths that seem to go away from what our original thoughts were.  The right path, though, the one we wholeheartedly believe we should be on, tends to appear in front of us not on our time, but at the right time.  This is a story of how Darren Friedrichsen’s journey has taken him to different places, all to bring him back to where he believed he was supposed to be – in trucking.

Born and raised in Bloomfield, Nebraska, Darren Friedrichsen (48) still resides there today.  Growing up, his life always revolved around trucking.  His father owned his own truck, his uncles drove, and his brother Derek (DJ) owns his own truck.  Even though Darren had been around trucks and trucking while he was growing up and he loved them, he wasn’t in a hurry to get into the industry.  But since he took his first ride with his dad, at just three years old, he knew that he would end up being a trucker.

After high school, Darren spent one semester in college and probably partied more than he should have.  He decided to enlist in the Navy, which he said was one part because he thought the Navy would bring some discipline to his life, and the other part because the Army recruiter had bugged him one too many times.  The Navy did in fact teach him the discipline he was seeking, but it also taught him how to party even harder than the college kids!  Darren was active with the Navy from 1991 to 1997.

During his time in the Navy, Darren was stationed in California.  While there, he quickly noticed that most of the trucks in California had a lot more shine and chrome than the ones back home in Nebraska.  It was a real eye-opener, for sure!  As some may say, this was the unknowing push into trucking that he didn’t know he needed but realized, with a newly renewed appreciation for the industry, that he was going trucking.  The first truck show he ever attended was the 1994 Truckin’ for Kids Show & Drags in California, which definitely opened up a whole new world for him.

Once out of the Navy, to satisfy home life, he went through all the testing to become a CHP Officer (California Highway Patrol) but didn’t go further because he realized it just wasn’t for him.  He proceeded to get into truck driving school which was, in essence, just a formality.  Still living in California, he couldn’t get the necessary experience he needed from those he knew back in Nebraska who could have easily taught him.  While in trucking school, Darren joked that he spent more time watching others practice than actually driving.

He thoroughly paid attention when riding with his dad and uncles when he was younger, and even though he hadn’t had wheel time, he knew what needed to be done.  After truck driving school, he found his first driving job at Arrow Trucking out of Tulsa, OK from an ad in a driver recruiting magazine.  This company was nationwide and had a terminal in Fontana, CA, which was very convenient for Darren.  He worked there exactly one year so he could acquire the necessary experience to get a better job, hauling gas in San Diego, which also got him home every night.

After 14 years in the gas hauling industry, Darren finally returned home to Bloomfield, NE.  Today, Darren has three children – Katerina (29) who also resides in Bloomfield, NE with her two kids, Natalie (23), and Nicholas (17).  The two younger kids live in California with their mother.  Nicholas has the trucking bug and is truck crazy just like Darren, which makes Nicholas a great sidekick whenever he rides along with his dad.  Nicholas also helps his dad at the truck shows whenever he can.

Prior to moving back to Nebraska, Darren bought a 1977 Peterbilt 352 in 2008 out of Nebraska.  This cabover had been in Bloomfield, NE since it was new, and Darren had always wanted this particular cabover because he rode in a cabover with his dad for the first time in one just like it.  Darren had been after the owner to buy it for many years and, finally, the guy gave in and sold it to him because he knew Darren would fix it back up again.  The truck tops out at 59.5 miles per hour, so you can imagine how much longer it took for him to drive that truck from Nebraska to California.

Once back in Nebraska, Darren started working for White Trucking out of Hadar, NE in 2012, driving a green and black flattop Peterbilt.  With that truck he showed for the first time at the “Made in the Shade” show in David City, NE back in 2014.  As time went on, Darren got into a newer truck, and many people got to know Darren because of that particular truck (this is what he was driving when I met him).  The truck was a black and red 2015 Peterbilt 389 with a Paccar engine, 18-speed transmission, 3:36 rears, and a 300” wheelbase.  He then moved into a solid blue 2018 Peterbilt 389, which he also took to a few shows, until opting to try something a little different – hauling locally for a sand plant in Oklahoma.  He made this switch in January 2018.

This new adventure at the sand plant didn’t last long, as trucking had a solid hold on him.  He was offered an opportunity at well-known Fleenor Bros. out of Carthage, MO.  Darren started working there in August 2019, stepping right into a nicely set up W900L.  That W900L is known as “Thin Mint” and it is the one featured here.  The truck is actually owned by Bryan Pfersching, but it is hard leased with Fleenor Bros.  When Darren started at Fleenor, he immediately got into this truck, which only had about 11,000 miles on it.

“Thin Mint” is a 2020 Kenworth W900L with an X15 Cummins, an 18-speed transmission, 3:36 gear ratio, and a 284” wheelbase.  The Kenworth sports Hogebuilt half fenders, a factory visor, modified at the Fleenor shop to tilt it down, giving it a more custom look, and an 18” Valley Chrome bumper.  The front air-ride is from Fletcher’s Diesel out of Lancaster, CA, the pipes are OEM, but the muffler guards were lowered to line up with the installed cab and sleeper panel extensions, the lights have all been changed from the Kenworth squares to rounds, and more lights were added to the bumper, frame and cowls.  The KW also has a painted Merritt deck plate, T. Kane hub covers on the drive wheels, and custom badges made by Thunder Grafix in Joplin, MO.

Having pulled many different types of trailers since starting with Fleenor, Darren has also made a few trips up to Canada, as well.  Fleenor is a diversified company and is known for having a fleet of beautiful trucks.  Currently, Darren is trying his hand at refrigerated freight, and he will always say his favorite lane to run is to the west coast.  The first show he attended with “Thin Mint” was at the 2019 Big Iron Classic in Kasson, MN.

Darren’s favorite trucking memory, which Nicholas will completely agree, was a time in 2017 when he and Nicholas were together in the 2015 black and red 389 that he drove for White.  Hooked to a livestock trailer, the two hauled cattle, along with Darren’s brother, for two days, from Montana to Nebraska.  Hoping to make new memories, his cabover now resides back in Bloomfield, NE with him.  The truck is powered by a Big Cam Cummins 350, a 13-speed transmission, and 4:33 rears.  Although it isn’t finished, when it is, Darren plans to take it to some shows, but he also wants to make sure it is roadworthy, so that it could haul a load if he wanted or needed to.

Special thanks from Darren goes out to Kyle Cousins (owner of Fleenor Bros.) and Bryan Pfersching for the opportunity to work for Fleenor, and to his brother DJ for all his help with the cabover (and simply for being there).  Darren is also thankful for the lessons and life skills that his dad taught him, including a solid work ethic.  Working hard was instilled in he and his brother at an early age, and neither have forgotten that.  His dad always kept a clean truck and had a high level of pride in the work he did, but he also teased Darren and DJ about their long wheelbases, their need (fascination) to polish their trucks, and how the bumpers of all their trucks sat on the ground.  Unfortunately, they lost their father in 1990, but they will never forget what he taught them.

I would like to thank Darren for our long-standing friendship and the time he gave up for me to photograph the truck.  We took the truck to several different areas around Tonkawa, OK last year in September to locations that would really showcase the greens in the truck’s paint.  Opportunity rarely comes when we plan for it, but it always comes at exactly the right time!  It’s funny how that works.  As always, to all the drivers out there doing the deal, truck safe.