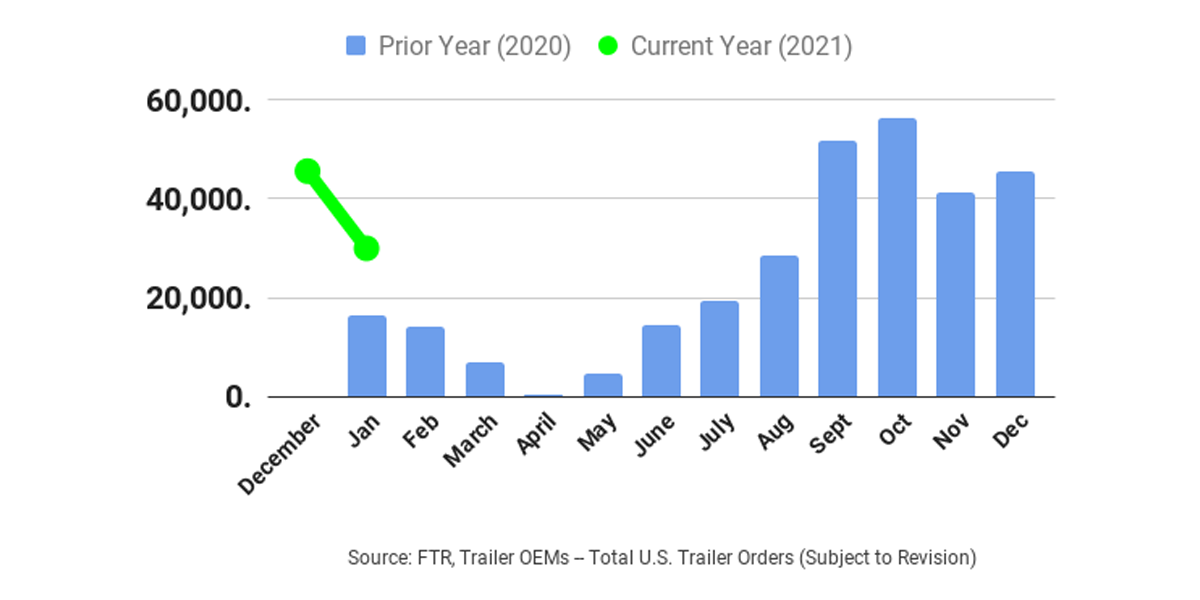 Preliminary reports indicate trailer orders in January fell about 34 percent to about 30,000 units compared to December 2020 orders, according to ACT Research and FTR.

However, January orders were between 83% to 94% higher than the same month last year.

January trailer order activity met expectations, as most of the large fleets had already placed their 2021 requirements orders previously, FTR officials said in a press release.

A couple of OEMs, for example, are booked solid for dry vans for all of 2021 and have limited capacity to book additional orders. Orders for refrigerated vans have been robust for the last four months, and orders for flatbeds have risen noticeably over the last two months and are expected to continue to improve in January.

“The year-over-year gain, with OEMs booking almost twice the volume they reported last January, was in line with expectations, as the industry continues to see solid interest from fleets for equipment acquisition,” said Frank Maly, director of commercial vehicle transportation analysis and Research at ACT Research.

“The order surge last September through December, which sets the stage for solid production volumes this year, is actually somewhat of a limiting factor for additional orders in the short-term. For dry vans and reefers, orderboards currently commit many OEMs into late 2021, and that means 2021 production slots are becoming a rare commodity,” Maley said.

Increasing production rates continue to be a challenge for trailer OEMs, as headwinds from increasing staff and growing concerns regarding materials and components supplies are evident, Maley said.

“The good news about January orders is that flatbed orders continue to recover,” said Don Ake, FTR’s vice president of commercial vehicles. “This will allow OEMs to raise build rates through the first half of the year. Dump and tanker orders are also expected to show gains. This means the manufacturing and the industrial sectors are showing strength, and this should translate to lower unemployment and GDP support later in the year.”

Trailer orders for the past twelve months total 313,000.