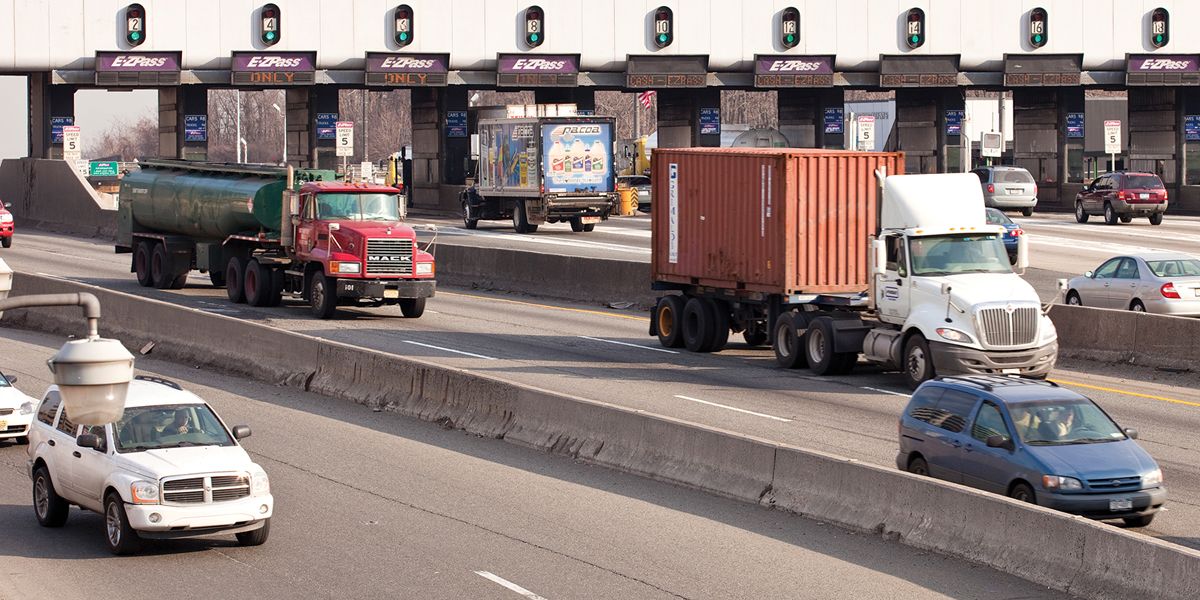 It could be said, if glibly so, that where trucks roll, tolls climb. At best, tolls are a necessary evil. Certainly, when truckers digitally fork over, say, $30 to cross a major bridge – plus another $11 or $12 to pay that toll by mail (via license-plate capture) – they expect in return to drive over a safe and well-maintained roadway.

The American Transportation Research Institute analyzed toll-system revenue in a 2020 research paper (see ‘Tolling by the Numbers’ at the end of the article). In the report’s foreword, ATRI sharply states the politics that can envelop tolling – and the sheer inevitability of this revenue driver: “Trucking is often a target revenue source for those states that need money to close funding gaps. This is often an easy political decision, since truck tolls are charged to businesses, not individuals or voters. Likewise, trucks often have no choice but to pay a toll due to lack of alternative routes.”

ATRI found that on a per-mile basis, toll facility revenues are 18 times those collected through the federal tax placed on motor fuels.

From that image, vehicle ownership is traced, and a toll bill is prepared and mailed to the responsible party. The first catch is the toll-by-mail cost is higher than tolls for transponder-equipped trucks, thanks to an added surcharge of typically 30% or even 45%, as on the Pennsylvania Turnpike. The second catch is there is usually an added surcharge if the billed amount is not paid by a specific date.

It’s not surprising states have been working to get rid of the cash-pay option, since there’s no need to employ collectors in toll booths. The booths can be removed, eliminating those maintenance costs. No booths also means traffic can flow more smoothly.

The arrival of the COVID-19 threat to public health pushed many states to accelerate the transition to all-electronic tolling (AET). For example, the New York State Thruway Authority completed its switch in November 2020, making what it calls “cashless tolling” the only way to go over its 570-mile system.

On the plus side, there are various third-party toll payment/management providers that have sprung up in the past 20 years to help fleet customers get the most out of the tolls they have to pay. Their pitch is that their centralized operations and expertise can save fleets both time and money. Offerings include various services, such as handling toll-by-plate payments more efficiently.

For example, Albany, New York-based Bestpass, launched in 2001 by the Trucking Association of New York, a year ago began offering toll-by-plate coverage of both tractor and trailer license plates.

Another big player is the Phoenix-based nonprofit PrePass Safety Alliance, which launched in 1993 with a weigh-station bypass system and added electronic toll-payment services in 2003. In 2017, PrePass launched a new data platform that includes tolling analytics.

“We are seeing COVID-19 accelerating the trend toward implementing AET nationwide,” says Heather Nolan, senior vice president of product growth for Bestpass. “While many tolling agencies were already moving in this direction, the pandemic either sped up the implementation, as we saw in Pennsylvania, or is escalating the discussions and planning going forward, based on a desire to provide a safe and reliable toll system for drivers and operators.”

While commercial traffic dipped during the early stages of the pandemic, many tolling authorities saw a significant decrease in commuter traffic for much longer, Nolan says. “This reduction of vehicles on the roadways created the ability to move construction plans forward, speeding up the implementation of AET. So, while there were already more than 150 AET facilities across the country prior to COVID, we expect to see most of the remaining facilities adopt AET over the coming months and years.”

With the rise of AET, fleets not set up to pay tolls electronically will be issued paper bills, triggered by the electronic reading of their vehicles’ license plates. Mark Doughty, president and chief executive officer of PrePass Safety Alliance, points out that “opting for an interoperable transponder that works with all tolling agencies will eliminate plate-reads, the cost of which is considerably higher than electronic tolls.

“Besides not paying higher toll-by-plate charges, equipping trucks with transponders means no longer having to reconcile invoices from all those agencies,” he adds. “We consolidate that billing and put it into a highly readable format. And if a toll is not legit – perhaps it is a misread that results in a maximum charge until proven otherwise – we handle that for the fleet as well.”

The increase in toll-by-plate billing incurred by some fleets led Bestpass last year to roll out its supplemental Toll by Plate service.

“While transponder-based will always be the lowest cost and timeliest way to pay tolls,” says Nolan, “not all fleets have business models or vehicle make-up that support a transponder-based program. These fleets can now register all their license plates, both power units and trailers, and gain the same operational benefits of our core toll-management program.”

Doughty points out that PrePass’s ElitePass transponders combine truck toll payments with weigh-station bypass, which was the operation’s foundational offering. “With ElitePass, carriers can bypass weigh stations and pay truck tolls under one account with consolidated invoices.”

The PrePass Plus toll-payment service includes the Inform Tolling interactive dashboard. “This evolved from what our customers were looking for,” Doughty explains. “The dashboard breaks down tolls by transponder, geographic region, and tolling agency. It monitors potential toll fraud and alerts of any improper use. As violations and payments are processed, the dashboard provides real-time updates on payments and disputes.”

For example, Doughty says that the dashboard can show a fleet where it is generating unusual tolling activity. “You can manage not just violations, but activity on each transponder so they can be cut off if needed. Without that insight, if a transponder is taken, there could be thousands of dollars of tolls charged to it. Also, by reviewing activity, a fleet might determine that at a certain time of day, taking an alternate route could cost less.”

Bestpass’s Nolan notes there are now a variety of discount programs operated by many toll authorities. They may offer a lower transponder rate, provide volume discounts, or offer reward or rebate programs for commercial operations. Two offered through Bestpass are the Chicago Skyway Rebate program and the SH130 Fly 130 Rewards program. “Both provide rebates back to the fleet if they choose their roadway over other non-tolled roads, thereby allowing the fleet to take advantage of the better maintained roadways at a reduced rate.”

This article appears in HDT’s March 2021 issue under the headline “Smart Tolling Strategies.”