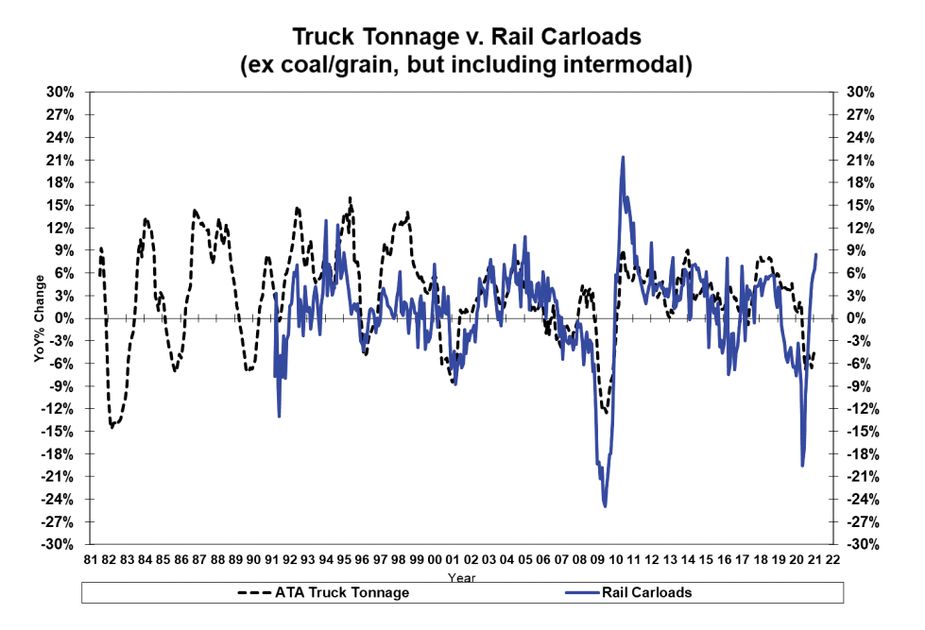 Many publicly traded fleets were optimistic about growth in 2021 in fourth-quarter earnings calls, noting they expect rate increases ranging from high single digit to low double digits. One carrier even anticipates rate increase percentages in the mid-teens. Many, however, were more evasive.

As of the week ended Feb. 12, we were still seeing about a 12% differential between spot and contract rates, so those rate forecasts could prove to be true – but rates can change quickly. We also are watching to see how new driver pay increases eat into some of those rate increases, as fleets continue to struggle to find drivers.

There are two sides to this equation: demand for freight to be moved, and the ability to supply the equipment to do so. Supply is tight, as we know, but what is cargo demand likely to be?

Despite the slowdown in freight volume that typically occurs after the Christmas holidays, Truckstop.com’s Market Demand Index in mid-February remained at an elevated level of 138, implying a very tight market for spot truck capacity (normal ranges are in the 30-40 band). And during a southern California fly-over, I counted 34 container ships waiting to dock at the ports of Los Angeles/Long Beach. This implies that there is still a healthy backlog of product that has already sailed to the U.S. and needs transportation to end markets. In other words, the markets are likely to continue to be tight over the next couple months as retailers continue to restock.

Having said that, with such strange year-over-year comparisons, how do we think about a reliable cargo forecast for 2021? Trying to forecast truck tonnage or freight demand is a mosaic approach at best, and with improved analytics, the field of potential datapoints has become large indeed.

Corporate profits as a data statistic is very important in understanding the business environment. The statistic I like to use (S&P 500 earnings) is easily available and applies to businesses across a broad spectrum of industries. When profits are strong, companies hire more employees, travel, and spend on capital and plant, which drives freight demand. With almost 75% of trucks operated by private fleets and local companies, I believe this general economic statistic tells as good a story as truck-industry-specific profits, and on a more timely basis. Currently, the forecast for S&P 500 profits is +23% on an operating basis. We rarely see growth this strong, so cash will be more readily available.

Is there an equally broad statistic that can give us a real-time second-level read on the magnitude and direction of freight trends? Industrial production is forecasted to grow between 3.5-4%, but this data needs a reliable verification. The answer, in my opinion, is rail carloads. Rail carloads lead GDP movements by an average of three to six months and industrial production by three to four months. And rail carloads are reported weekly by the Association of American Railroads, versus a two-month lag for truck tonnage information.

I prefer to use an “adjusted carload” figure, removing coal and grain carloads, which do not drive substantial truck business and are more subject to weather and currency influences. I add back intermodal carloads, as I believe this helps account for the housing and retail components of the economy.

As you can see on the graph above, these adjusted rail carload numbers track well with truck tonnage in terms of direction and magnitude. These have a consistent predictive value with industrial production and corporate profits. So the implication for freight volume growth for 2021 is continued positive momentum in the upper-single-digit range. This will likely slow in the second half of the year to the mid-single digits.

This commentary originally appeared in the March 2021 print edition of Heavy Duty Trucking.

Out of this world: Galaxy goes Gold with FORS
An XG investment leads to more DAFs for haulier Keyo
Truckpulling Ruttchen Powerrr Mercedes
Land of Lincoln
Scania UK apprentice of the year on top of the world