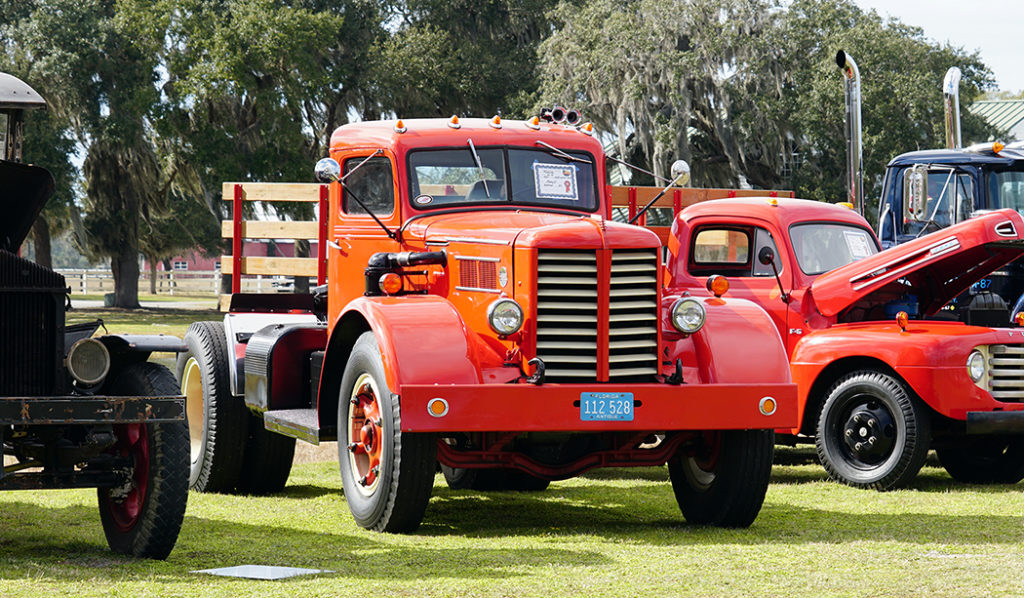 Florida is known for plenty of things including oranges, beaches, palm trees, plenty of large rides and of course, plenty of fun in the sun.  The fun in the sun part was no exception for the 8th annual Vintage Trucks of Florida Show, which is a chapter of the Antique Truck Club of America.  This event was held in conjunction with the 14th Annual Historical Farmall Tractor and Chapter 27 IH State Show on February 4-6, 2021 in Leesburg, FL.

The Historical Farmall Museum is definitely something you want to see, even if the show isn’t going on.  While on the property, everything takes you back, including their 1940s prototype International Harvester dealership, which was established in 2008.  From the IH sign, flat roof, and fully stocked parts department to the shop where they restore the tractors, you definitely need to take the time for a tour.  Museums are the lifeline to many aspects of history in the United States and this museum is no exception.  Need a cool place for a group gathering or a wedding?  Their show barn is available for booking such events.

The Vintage Trucks of Florida was started by a group of the founding members who wanted to bring a chapter of the Antique Truck Club of America to Central Florida.  This year marks the first year for President JoJo Dzilinski.  JoJo likes to say the club’s focus is “having fun with old trucks” and calls that phrase their guiding principle.

Over time, I have attended plenty of truck shows that included a variety of activities, but I haven’t attended one as diverse as this one.  There was literally something for everyone.  For the red tractor fans, there was plenty to see, from the museum to the gift shop, and for the country boys and girls at heart, there were tractor pulls.  Hungry?  The food vendors were plentiful, giving attendees a variety to choose from.  Near the gate entrance, by the attendee parking area, there were several vendors with a variety of items for sale, including swap meet style booths, a t-shirt booth, and even a pinstriping booth.

Thursday, February 4, was setup day, with trucks and tractors being put on display.  To entertain those on the grounds, Florida Flatlanders Bluegrass played from 6:00-8:00 PM.  More rigs came in on Friday, plus it was the first day of the tractor pulls, which began at 1:00 PM.  Also on site was Chris Fiffie from Big Rig Videos, doing what he does to bring his followers great visuals, and also friend and fellow 10-4 Magazine contributor Chad Violet, along with his girlfriend Amanda, grabbing some good photos and temporarily escaping their Ohio winter weather.

Friday was beautiful, compared to the impending rain forecast for Saturday.  A fine line-up of vintage trucks owned by the DeBerardinis family included a 1972 Brockway 361, a 1937 Mack AC, a 1988 Mack RD, and 1990 Mack RD888.  Bubba Branch rolled in with his newly finished 1996 Kenworth W900 “Just A Phase” (his wife Krystal and son Kolt joined him later in the day), along with a few other trucks.  For those wanting to partake, there was a BBQ dinner served while Braxton Bennett Music provided some live entertainment.

Saturday’s forecasted rain held off, making it a nice warm day, with normal Florida humidity.  More trucks rolled in, including friends Nick Black out of North Carolina with his 1985 Peterbilt 359 (my December 2020 feature), his son’s 1986 Peterbilt 359 with Kyle Wilson behind the wheel, and Jesse Meadows with his “Emmie Lou” – a gray 1988 Peterbilt 379.  It was also nice to see Jeremy and Nicki Williams, along with their red and black 2005 Kenworth W900, which I featured in our February 2019 issue.

Throughout the afternoon, you could hear the tractor pulls happening and see the clouds of black smoke in the air, along with some pickup truck pulls, too.  One thing that was pretty cool were the fire trucks, which were parked around one of the ponds, sucking water out of the pond and then spraying it back in.  I had heard one of them was stuck, due to the soft ground around the pond, and had to get a tug out.  Unfortunately, I missed seeing this cool moment, with people being good people and helping each other out.

Since their first show, the goal of the Vintage Trucks of Florida was to get 100 trucks in attendance, and this year they succeeded, with a total of 101.  Pickup trucks, old semis, and new semi-trucks all occupied the show parking area.  As the event came to an end, it was nice to have the time to visit with all the friends who were in attendance.  That evening, after I had already left, the predicted rain finally started, but it was not near as bad as what was anticipated.

I definitely believe that this show will continue to see growth every year and, fortunately, there is plenty of room for that growth at this beautiful venue.  Be sure to watch the chapter’s website (www.vintagetrucksfl.com) for updates on their 2022 show.  Come out and have some fun in the sun with all the cool old and new iron for your viewing pleasure.  As always, to all the drivers out there doing the deal, truck safe.