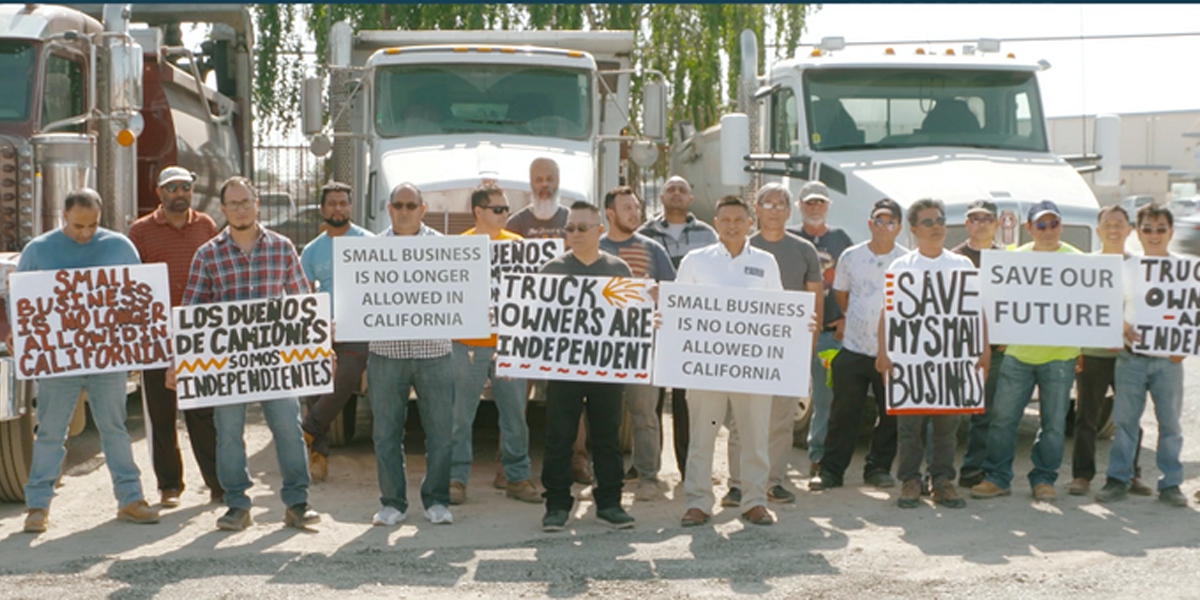 UPDATE: The United States Court of Appeals for the Ninth Circuit has granted California Trucking Association’s (CTA) request for a stay of the AB5 mandate to allow CTA to petition the United States Supreme Court, according to a June 24 news alert issued by law firm Scopelitis, Garvin, Light, Hanson & Feary.

CTA is seeking a review of the appellate court’s ruling that CTA v. Bonta that the restrictive “ABC” employment test required in California by AB5 is not preempted by the Federal Aviation Administration Authorization Act of 1994 (FAAA).

The Supreme Court only reviews but a small percentage of cases, noted Scopelitis, so the Ninth Circuit’s stay “suggests agreement that the case fits within the criteria for cases to be heard by the Supreme Court.” (Update end)

The California Trucking Association plans to petition the U.S. Supreme Court to consider its case against the state’s new worker classification law. CTA announced the legal move on June 21, the same day the United States Court of Appeals for the Ninth Circuit denied CTA’s request for an en banc rehearing of a case brought against the law, known as Assembly Bill 5 (AB5).

The April 28 decision that CTA wanted reviewed had found that the association was unlikely to succeed on its claim that the Federal Aviation Administration Authorization Act of 1994 (F4A) preempts AB5, which imposes a new “ABC” test to determine if a worker should be classified as an employee or an independent contractor

Responding to the court’s action, CTA CEO Shawn Yadon said in a statement that while the en banc denial is “disappointing,” CTA is “committed to continuing our efforts to protect California’s 70,000 independent truckers.

“Enforcing AB5 would throw the nation’s supply chain into further chaos and destroy the livelihoods of thousands of blue-collar entrepreneurs,” he continued. “We will look to every option to prevent greater harm including filing a motion to delay the removal of the preliminary injunction, while we also petition the U.S. Supreme Court to consider our case.”

The denial of a rehearing means that the injunction CTA had obtained from the district court against enforcement of AB5 against motor carriers will not remain in place and will be dissolved as soon as seven days from the date of the decision, according to Scopelitis, Garvin, Light, Hanson & Feary attorneys in a news alert.

Under special pandemic timing rules, CTA has 150 days to petition the U.S. Supreme Court for a writ of certiorari, the Scopelitis attorneys pointed out. “During this time, CTA may petition for a stay of the Ninth Circuit’s resolution of the injunction until the Supreme Court has ruled on a petition for review.  While it is difficult to predict the precise date when the injunction will be lifted and AB5 can be enforced against motor carriers, this date could be as early as June 28.”

The Scopelitis Law Firm also advised that to avoid the dissolution of the injunction while petitioning the Supreme Court, CTA may file a motion to stay the issuance of the Ninth Circuit’s mandate until the Supreme Court decides whether to take CTA’s case.

The “B prong,” as it’s called, is the sticking point for trucking. It’s hard to argue that delivering freight is “outside the usual course” of a motor carrier’s business.

CTA has challenged AB5 on the grounds that the law is preempted by the supremacy and commerce clauses of the U.S. Constitution and also is in direct conflict with the Federal Motor Carrier Safety Act and the Federal Aviation Administration Authorization Act of 1994. (Part of the FAAAA bans states from enacting laws that affect a motor carrier’s prices, routes and services.)