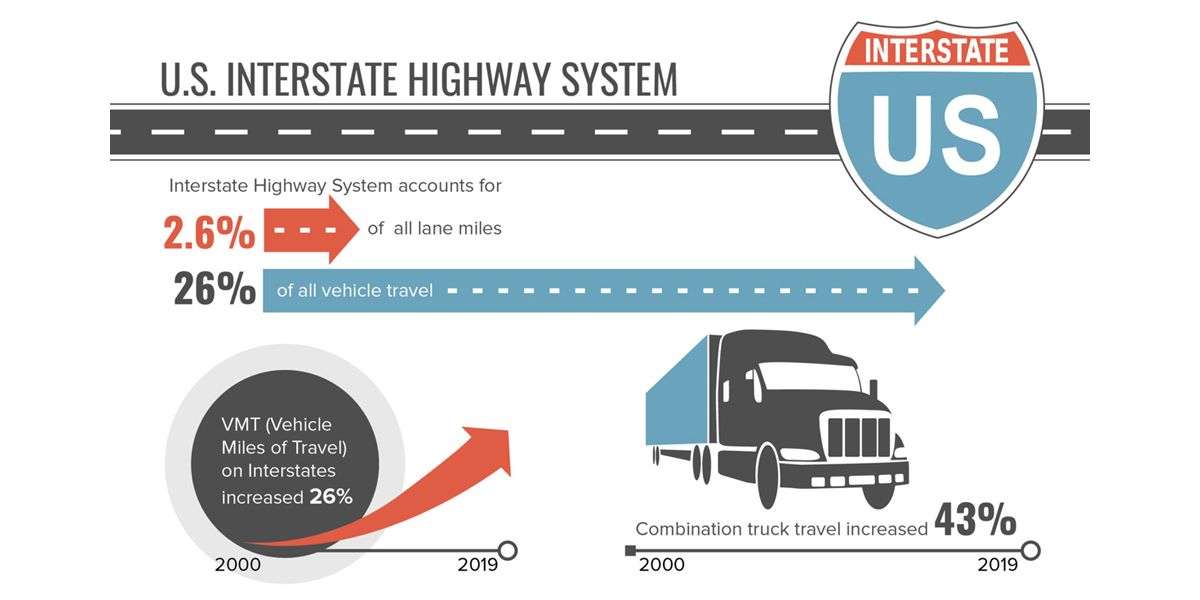 The system will need to be rebuilt and expanded to meet the nation’s growing transportation needs, according to a report released by TRIP, a national transportation research nonprofit.

According to the 2019 TRB report, the Interstate system has a persistent and growing backlog of physical and operational deficiencies as a result of age, heavy use and deferred reinvestment, and is in need of major reconstruction and modernization. The TRB report concludes that annual investment in the Interstate Highway System should be increased approximately two-and-a-half times, from $23 billion in 2018 to $57 billion annually over the next 20 years.

The TRIP report found that from 2000 to 2019, travel on the Interstate system has increased by 26% — a rate nearly triple that at which new lane capacity was added.

As a result, 47% of urban Interstate highways are considered congested during peak hours. Due to the COVID-19 pandemic, vehicle travel on U.S. highways dropped by as much as 45% in April 2020 (compared to April 2019) but rebounded to 6% below April 2019 levels by April 2021.

The report also found that travel by combination trucks on the Interstate increased at a rate more than double that of overall vehicle travel between 2000 and 2019.

Combination truck travel on the Interstate system increased 43% from 2000 to 2019, while overall vehicle travel increased 19%.

“Our rapidly deteriorating infrastructure is a clear and present danger to our nation’s supply chain. Breakdowns in the Interstate Highway System add an annual $75 billion to the cost of freight transportation, and 67 million tons of excess carbon dioxide emissions are released into the atmosphere every year from trucks stuck in traffic congestion,” said Chris Spear, president and CEO of the American Trucking Associations, in a TRIP press release. “This report quantifies how severe this crisis has become, and it underscores the urgent need for Congress to make real infrastructure investments that are backed by a fair and equitable user-based revenue source.”

TRIP’s report finds that while pavement smoothness on most segments of the Interstate system is acceptable, the crumbling foundations of most highway segments need to be reconstructed, and that continued resurfacing — rather than addressing underlying foundational issues — is resulting in diminishing returns and results in shorter periods of pavement smoothness.

The current federal surface transportation program, the FAST Act, the primary source of Interstate highway funding, expired on September 30, 2020 and was extended by one year by Congress to September 30, 2021. Reauthorization of a new long-term, adequately and reliably funded long-term federal program will be needed to ensure that a strong federal program supports the restoration of the Interstate system, TRIP officials said.

Based on the findings of the TRB Interstate report, TRIP has provided a set of recommendations for the restoration of the Interstate Highway System, which includes: the foundational reconstruction of Interstate highways, bridges and interchanges; improvement to roadway safety features; system right-sizing, including upgrading of some roadway corridors to Interstate standards; adding needed additional highway capacity on existing routes; adding additional corridors; and, modifying some urban segments to maintain connectivity while remediating economic and social disruption.