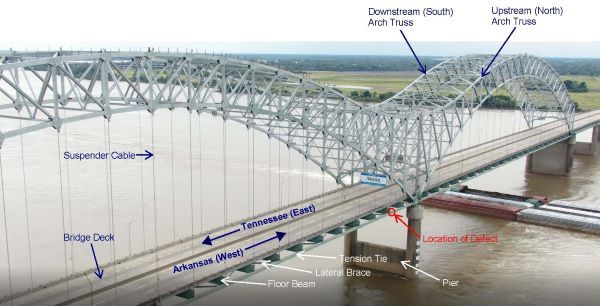 Closed since May, the I-40 Hernando DeSoto Bridge over the Mississippi River in Memphis, Tennessee, will reopen under limited traffic on Monday, Aug. 2, while contractors finish the work. The bridge is expected to fully reopen by the end of the week.

On May 11,, a contractor doing a bridge inspection for the Arkansas Department of Transportation discovered a crack in the bottom side of the bridge truss and immediately shut down the bridge.

The Tennessee DOT shares responsibility for the bridge with the Arkansas Department of Transportation. ArDOT handles the inspections, TDOT the repairs.

Contractors will have completed all the phase three plating by Friday, according to TDOT. They will begin to demobilize, break down platforms, remove equipment and barriers starting with the eastbound direction. They will do this one side at a time as it is the safest scenario for the workers.

Barring any complications, the reopening plan is as follows:

I-40 is a major artery, with one of the highest truck traffic percentages in the United States. The I-40 Hernando DeSoto Bridge is one of only two river crossings in the Memphis area. The other is the I-55 Mississippi River Bridge, which was built in the mid-1940s. I-40 provides for much of the nation’s east-west interstate trucking traffic and I-55 accommodates north-south traffic.

The next closest crossings over the Mississippi River are located approximately 85 miles away on I-155 between Missouri and Dyer County, Tennessee, north of Memphis, and on U.S. 49 between Helena, Arkansas, and Mississippi, south of Memphis.

While the bridge has been under repair, all interstate traffic in the Memphis area has been diverted to I-55.

Immediately after the closure, the Arkansas Trucking Association estimated that the closure was costing the trucking industry more than $2.4 million each day it was closed.

“We know having the bridge closed has been incredibly inconvenient,” said TDOT Commissioner Clay Bright. “We appreciate the public’s patience while our team made the repairs and performed extensive inspections to ensure it’s structurally sound for many years to come.”