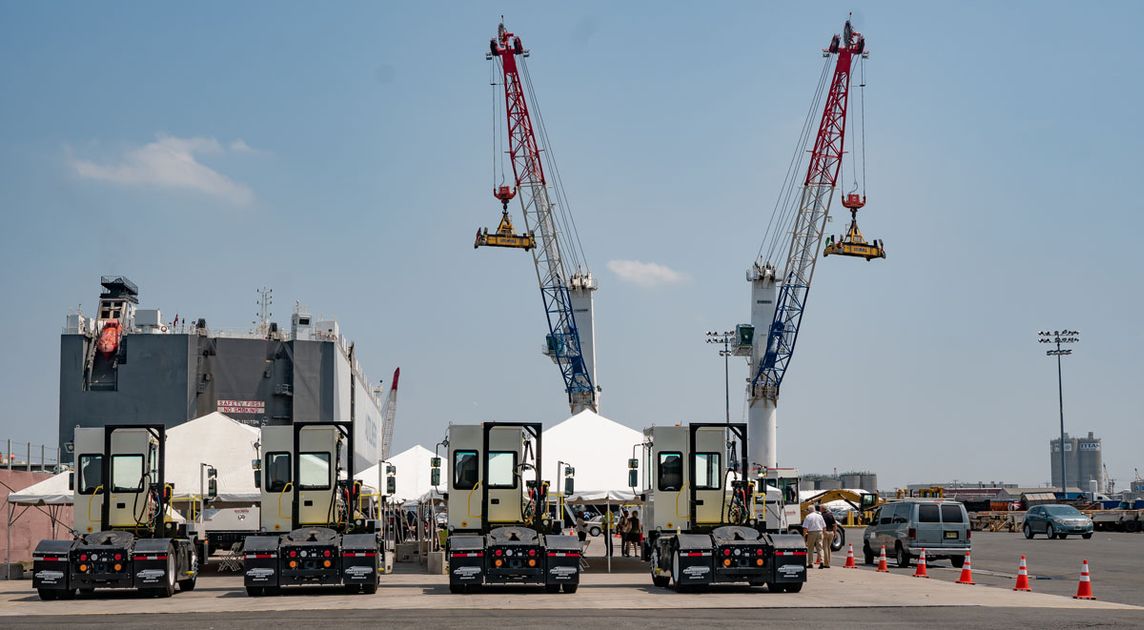 Ten battery-electric yard tractors are now in operation at a container terminal in Port Newark, New Jersey. Red Hook Container Terminals on Aug. 11 held a ribbon-cutting to announce the official deployment of the BYD Motors yard tractors.  The announcement said it is the single largest deployment of battery-electric trucks in the eastern United States and the first such deployment at a Port Authority of New York and New Jersey marine terminal.

Five of the yard tractors are being used for sea container movement from the cross-harbor barging operation. The other five go to the other terminals and to the Millennium Rail yard to pick up and drop off containers.

“Red Hook has always taken the health of the communities it operates in, its workers, and the planet seriously,” said Mike Stamatis, president and CEO of Red Hook Container Terminal, in a news release. “This project was a long-time in the making and a large investment, but it is an investment we believe will return dividends in terms of public health, operational costs, and efforts to save the planet.”

More About the Electrification Project

The BYD model 8Y yard tractors being deployed by Red Hook Container Terminals LLC are third-generation equipment that come with 217 kWh lithium iron phosphate battery packs that have 241 horsepower and can pull loads of up to 102,000 pounds gross vehicle weight rating. They can operate continuously for up to 12 hours or more before recharging, or can operate 24/7 with opportunity charging during shifts.

Yard Tractors are a Great Fit for Electrification

In a recent report on truck electrification, ACT Research identified yard tractors as one of the highest potential applications for rapid adoption of the technology.

“There’s a set [of vehicle applications] that might not be high-volume, but we see the transition to electrification could be close to 100% over the next 20 years,” ACT analyst Jim Meil told HDT in an interview. “Class 8 yard spotters are a small-volume niche market, but the mission requirements are so conducive to electrification that we see almost a full migration,” he added.

In fact, the upcoming Advanced Clean Transportation Expo in Long Beach, California, Aug. 30-Sept. 2, will feature electric terminal tractors on display and/or in the ride-and-drive from Autocar, BYD, Dana, and Orange EV, plus a hydrogen-electric model from Capacity Trucks.

While East Coast ports may not be as far along in deploying zero-emissions vehicles as California, port officials said this was only the beginning of their efforts.

“These zero-emission electric yard tractors do not represent the finish line as far as meeting the seaport’s goal to reduce emissions. But it’s a major step forward,” said Sam Ruda, director of the Port Department of the Port Authority of New York and New Jersey. “It affirms both that the technology is developing rapidly and is applicable to container terminals, and it underscores the role the public and private sectors are playing in making it a reality.”