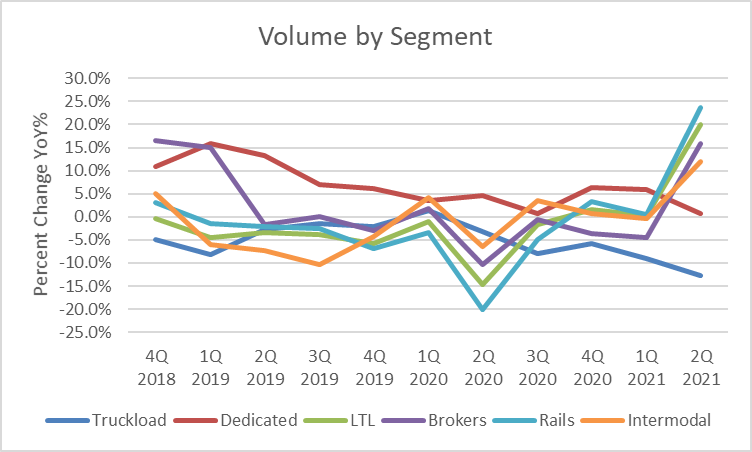 Overall, 2022 earnings per share outlooks are up by about 3%, but this represents a deceleration from the 10% rate in the first quarter. Yields (earnings per share for the most recent 12-month period divided by the current price per share) largely came in ahead of expectations, and volumes finished the quarter at a strong clip.

However, both labor costs and purchased transportation expenses came in well above expectations, and challenges hiring workers could weigh on near-term earnings growth for some companies.

LTL revenue ‘shot the lights out’

In the pure truckload segment, industry revenues and operating expenses remained relatively flat and margin growth continued from the first quarter. The industry average margin growth was 13.4%, a 2.8 percentage point improvement from the previous year. Heartland had the highest operating margin at 17.7%, just inching out Knight-Swift at 17.1%. The margin at U.S. Xpress dropped 3.3 percentage points to 2.6%.

The dedicated sector was probably the biggest negative surprise this quarter. Companies were heavily affected by the driver shortage and consequential spot rate hikes as projects ramped up. We saw diminishing margins of 2.9 percentage points.

The less-than-truckload space showed impressive margin improvement and a meaningful bounce-back in revenues, despite a still-slow industrial marketplace. The LTL sector was one of the best stories in transportation in the second quarter and could still be getting better. Yields continued to improve from month to month during the quarter, and some carriers were even better in July than June.

This is also the sector where capital spending announcements picked up. Revenue shot the lights out, reporting an average of 38.4% growth. Unlike last quarter, the primary revenue driver was not just the yields, which were approaching 15% at quarter’s end, but the increased volumes of 23.3%. Overall LTL industry margin came in for the quarter at a record high of 14.5%, the biggest winner being Old Dominion at 26.7%.

The brokerage and logistics group shared the elevated revenue of the transportation sector, though the incremental margin is showing signs of a slowdown, as contract rates did not keep pace with rising spot rates. These companies reported an average of 81.6% revenue growth but an accompanying 82.1% operating expense growth. The incremental margin recorded a respectable growth of 8%, though it was the lowest in the last three quarters. The main expense driver was purchased transportation at 66% growth.

This article first appeared in the September 2021 issue of the Heavy Duty Trucking.