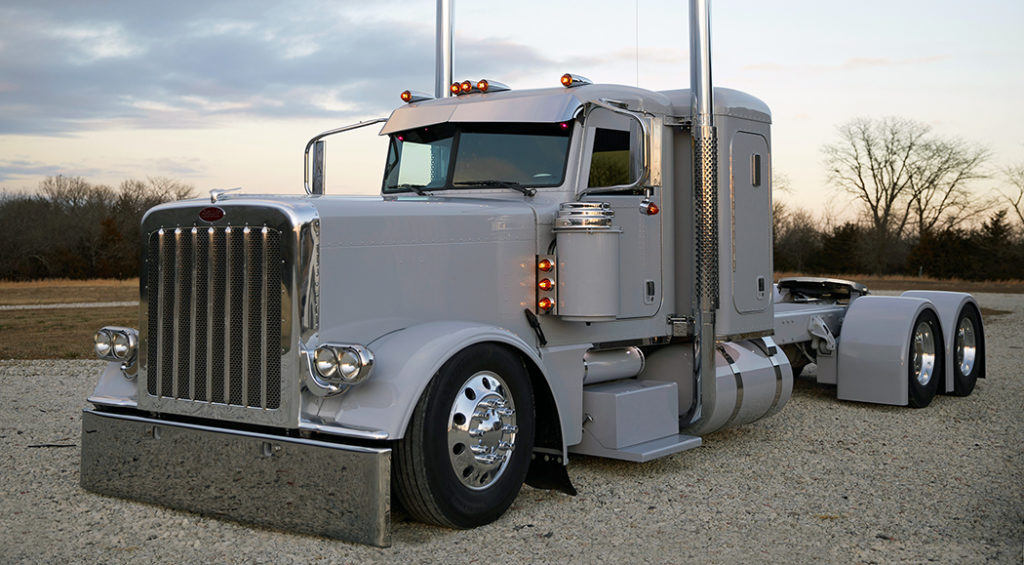 This month’s creation was built for Kyle Wetzel (32) of WWW Trucking in Carrington, ND.  Kyle has always been a hustler and hard worker, which pretty much describes “What’s Up” here.  Married to his wife Mariah for two years, the couple has twins that are just one year old – a daughter named Kayslee and son named Kayler.  Kyle also has a 13-year-old daughter named Karsyn from a previous relationship, who is very much a part of their lives, as well.  While Kyle trucks hard, his wife owns and operates a company called Precision Ag Planting.

Like a lot of us, Kyle does his best work at the last minute or under pressure.  I know I can relate, and so can my editor, Dan.  We both kind of operate in that “if it weren’t for the last minute nothing would get done” space.  When I called Kyle at the last minute and asked him about being featured, he was like, “Yeah, we can get ya what ya need.”  You see, every time he picks a truck up from me it’s always at night and he’s always chasing a load.  And this truck was no different.  Thankfully, their friend Marley Sutter was able to take and share some great pictures of Kyle’s truck and his family for this article.

With two brothers (Hunter and Gunner) and two sisters (Sierra and Shelby), Kyle’s company name “WWW” represents the three Wetzel brothers, who now work together.  The sisters are not involved in the trucking operation (one is currently deployed in the Middle East and the other is involved with the USDA).  Kyle’s dad “Fritz” Wetzel retired from working in the oil fields and then began helping at the local farmer’s cooperative.  His mom moved to Memphis four years ago, but they still keep in touch.

During high school, Kyle worked for a local farmer and liked seeing the trucks.  One of Kyle’s buddies bought him a truck to run, but the deal didn’t go too well.  Thankfully, they stayed friends.  After that, Kyle bought a used glider kit from one of my old customers, but about 100,000 miles later, it blew up.  Scraping together the money to fix it, a week later the transmission went out.  He didn’t have the money to take it somewhere, so he took it home and repaired it himself.

Running that truck until he was able to order a new Peterbilt, having seen a few we had done, he gave me a call.  We didn’t know what to think of him at first because his ideas were pretty out there, but as time passed, Kyle became like family to all of us.  I would have done an article on the first truck he ordered, but, like mentioned before, he picked it up really late and had freight to haul.  We never got any good pics of that truck, but it was a cool black 2018 Pete 389 with an orange frame, a long wheelbase, and had a flat cab with a 48” standup sleeper.

So, when it came time to get the next new truck, Kyle called to order another one, and there was no doubt it was going to be a special build.  When we get a lot of trucks to do, my friend Tyler at NRC (No Rush Customs) helps out with those special projects.  When the truck showed up, Kyle wasn’t in a big hurry, so we sent it to Tyler, who did a great job dialing it in.  Kyle has cool ideas and is always open to suggestions, so it was a good deal.  If you love what you do, it’s not really work.  You could say that’s the motto of everyone involved with this one – from Kyle ordering it, to me selling it, and Tyler building it.

This latest truck is a 2021 Peterbilt 389 with a long wheelbase, a 36” flattop, an X15 with 2050 torque, an 18-speed, Low LowAir, just the right sized fuel tanks, and a hidden DEF tank.  The color is a light gray on both the frame and body.  Tyler found and swapped the complete dash from a 1994 Peterbilt, and then Carl at Rockwood Products built some nice dash panels, set up with the old rocker switches and new-style gauges, and then NT Lites in Nebraska changed all the lights from amber to white.  Kyle also wanted white underglow lights mounted under the truck, which sounded weird at first, but in the end, they turned out really cool – and boy do they light up the lot!  Other changes done inside included Legacy low back seats, an Espar heater for the sleeper, and a diamond tuck interior kit from Spare Time Fab.

Because of Kyle’s rocky and hard road when starting in trucking, he never took time off.  But, as Kyle’s oldest daughter is getting more involved in sports, he has been really enjoying going to as many of her games as he can and spending as much time as possible with all the kids.  The dash plaque on this Peterbilt says “Custom Built For What’s Up” – and, in Kyle Wetzel’s opinion (and mine) – buying a new cool truck to work, well, that’s What’s Up!