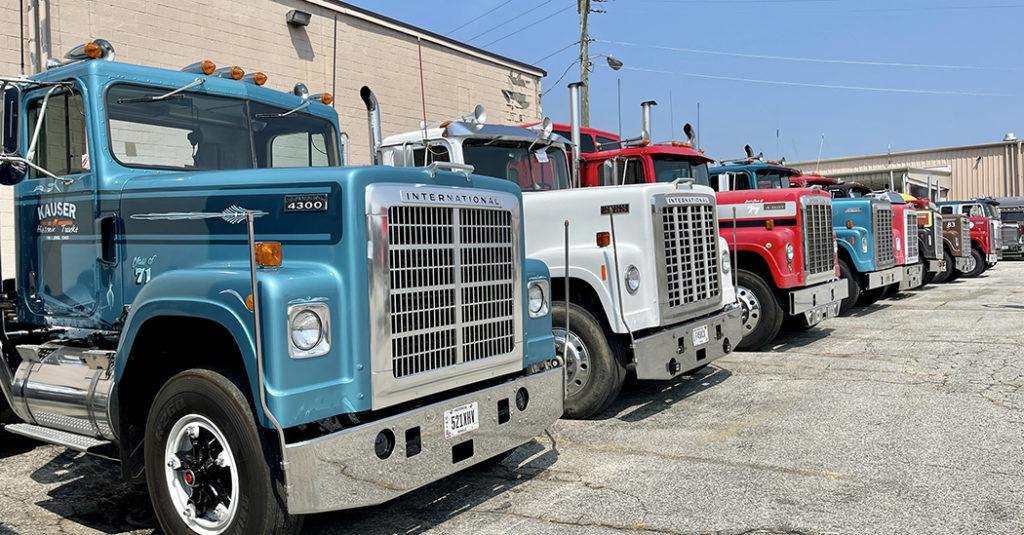 The third Harvester Homecoming took place on August 6-7, 2021, on the grounds of the former International Harvester Engineering Center in Fort Wayne, IN.  This isn’t your average truck show.  In addition to a plethora of IH trucks of all models and sizes, along with dozens of Scouts, it also serves as a reunion for former and current IH and Navistar employees.  Former employees on hand meant amazing tour guides were leading packs of eager attendees around the huge facility on foot.  Bus tours of the rest of the sprawling grounds were available, too (more on that later).

The building, set up in the shape of the iconic IH logo, once housed tons of testing facilities, such as extreme hot and cold test rooms, and modeling and design – including an enormous room that was once filled with row upon row of men hunched over drafting tables (an uncomfortable pose I know all too well).  It is now owned by a non-profit, which is converting it into a museum.  Trucks and items have been donated already, and Navistar loaned a large number of vehicles to put on display, as well.

I attended last year’s event in 2020, but this time it was a completely new experience, thanks to a different tour guide.  My group was led by Tom, who had been an engineer and technician for Navistar for 27 years (from 1985 until the engineering center was closed in 2012).  Other than my friend Leslie Madigan, our group consisted of Tom’s immediate family.  Tom led us around for well over an hour, sharing stories in now-empty rooms, where many notable memories had taken place years ago.

The first stop on the tour actually included a former sculptor describing the early stages of the design process.  He was surrounded by his old workspace setup, and drawings and paintings he would have used to create his model.  While demonstrating his trade, he also talked us through the design process, from initial sketch concept to finished product.  From there, Tom led us down the hall to a conference room.  He vividly remembered being called in to fix a projector during a high-level meeting.  Successful repairs in situations like that made him the hero of the moment.

At 2:00 pm, we boarded a bus for a tour of the grounds with some friends and other attendees.  Another former employee brought it all back to life, along with the help of some passengers who had also worked there at one point or another.  With all of their memories combined, it was a fun and informative experience.  The bus took us past the test track, a sound testing facility, and other buildings in the complex.

After the tours ended, Leslie and I wandered around for a while reading information boards in front of vehicles, visiting with vendors, chatting with friends, and (very importantly) cooling off with ice cream.  As I walked around, I filmed a 13-minute video you can find on my YouTube channel (Miss Flatbed Red).  The owner of the very last Scout ever made happened to be on hand as I walked past, so you can enjoy a spotlight on it in the video.  While a guided tour isn’t required, it definitely made the day more meaningful and interesting.  The employees are so passionate about their time working there, it would be a waste to attend and not to listen to what they have to say and share.

I caught up with Stevie as the show was winding down, and when I was unaware there were any awards at all.  I simply liked his truck and wanted to show him a photo I took of it back in Harrisonburg, VA at the ATHS national convention.  At the same convention, Stevie’s friend, Nelson Lemmond, began putting the pressure on him to attend the Harvester Homecoming.  A bribe was the final push to get Stevie to drive 700 miles to the show with four trucks.

Stevie has been trucking for 53 years, having started driving at the age of 15.  “It’s only bragging if you can’t back it up,” he said.  “I’ve driven over 5.5 million miles, and never had one accident.”  Over those 53 years, he’s also been awarded Maryland’s 2000 Logger of the Year award.  In 2001, the company won the East Coast Logger of the Year award.  Prior to that, no one from his state had ever even been nominated.

His award-winning truck is a 1981 4300 Series International.  It has a 13-speed transmission hooked to a 400 Big Cam 3 Cummins, which, as he said, “Was a very stout motor in its time.”  With approximately 400,000 original miles, it is “by no means worn out.”  Stevie has only had the truck since November 2020, when he purchased it from a gentleman in Pittsburgh.  “Since we brought it home, two of my best friends/employees have spent over 700 hours – and too much money – on it.  We worked around the clock for three weeks from 7:00 am until 9:00 or 10:00 at night so we could make this show.”

Stevie himself did a great job at summarizing this unique show, so I’ll let him wrap things up.  “I’ve probably been to over 100 shows all over the country, but this is the most unusual show I’ve ever been to.  It’s so much different.  I’ve met so many former employees of IH, and everyone has gotten so emotional (many of them have cried).  They’re so appreciative we’ve brought the trucks back for this show.  Every employee said how much they loved working for IH, how well they were paid, how much they enjoyed the work, and how sad they were that it closed.”

Aside from $3.00 to park, this event was free.  You can follow this event on Facebook (Harvester Homecoming) or visit their website for details about the 2022 event being held on August 5-6 (www.harvesterhomecoming.com).  Thanks to everyone who made me feel so welcome and made this show a true “homecoming” for former IH employees and IH fans alike.