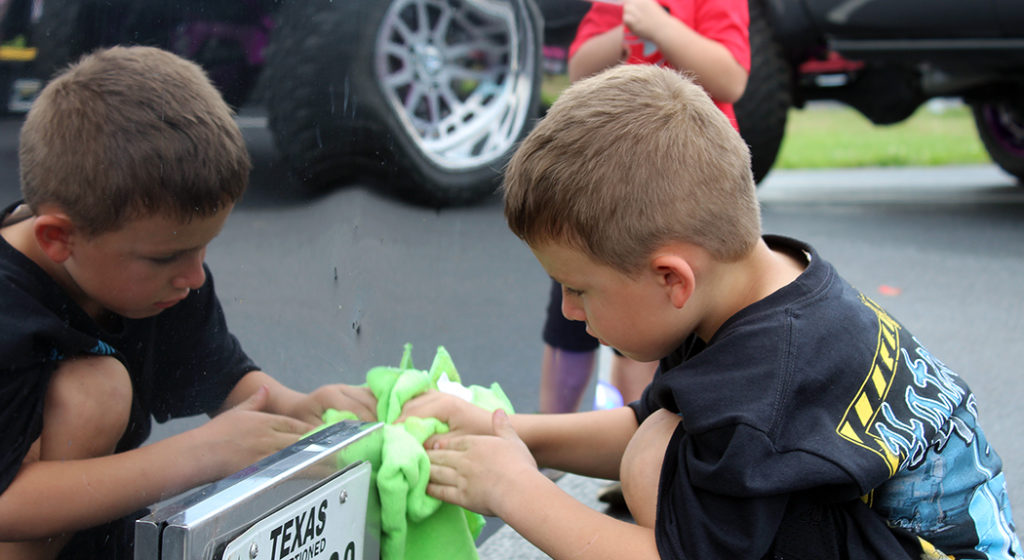 If you know me, then you know my daughter Jolie is my entire world.  Since birth she has had many medical issues which resulted in more doctor appointments, therapies, and procedures than one person should be allowed in a lifetime.  Jolie is now seven years old.  On October 28, 2020, she was given a diagnosis that we knew was coming since before she was two.  They diagnosed her with Autism, along with ADHD, OCD, and Oppositional Defiant Disorder.  She is developmentally at a 3-year-old level in most aspects, but when it comes to taking care of our little hobby farm, she works harder than some adults I know.

To have a child with special needs is a hard I never knew existed.  And not just mentally and emotionally, but also physically, as well.  This last summer we had occupational therapy that required us to drive over an hour and a half each way.  After an hour of service and then another hour and a half back home, it was a full day – and we did that twice a week.  During the school year, Jolie has four therapies a week!  As I’m telling you how rough it is on us, I know others have it much worse, because I have been beyond blessed with the chance to stay home with her for the last seven years.  I know many parents out there do not have that option.

In May 2021, one of my husband’s cousins, Andrea, sent me a post from a local mom named Ashley Smith.  She wanted to open an all-inclusive Autism school that served birth-5 and k-12.  This means all of our therapies that we drive so far for would be in her school.  We were over the moon!  This was the answer to so many of my prayers.  If you have a child in the public school system you may know that it’s a constant fight for individualized education programs and services, and we have definitely had our fair share of problems.  Upon further reading, we learned that Ashley had to raise $25,000 to purchase the building.  I’ve been told I don’t listen enough to what God tells me to do, but I swear, I heard him all but yell at me, “Kasey!  You have to host a truck show!!”

I talked to my husband Terry and told him what I wanted to do, and he thought I was crazy.  Ashley obtained a building and I met with her to tour what would be the future school.  When I left, I was in tears.  Her vision was incredible!  A birth to 5 years old pre-school, a k-12 special needs academy, along with all our therapy services in one place – and a place to teach life skills to the older kiddos, transportation to and from their therapies, and counselors to help parents and families determine what services their child and family were eligible for.  Right then and there, I set my goal to have 15 trucks and raise $4,000.

Since we have been doing truck shows for the last seven years, we have made it our goal to promote a positive family image to the trucking industry.  For some it’s just a job, but for us it’s been our entire life and livelihood.  I have been in trucking since I was born.  My dad, grandpa, uncle, and great grandpa were or are all truck drivers.  I never got into the show trucks until Terry and I got together.  We took Jolie to her first truck show (Guilty By Association Truck Show in Joplin) at just three months old.  We found that it was a great way not only to spend time together as a family but to learn how to work together.  Terry grew up in trucking.  His mom, Donna, was a waitress at a truck stop diner.  As a single mom with no babysitter, he would often stay the night at the truck stop with her.  After being around the trucks, that’s all he’s ever wanted to do since.

Through various resources and people we’ve met over the last seven years, sponsors started pouring in.  So many people we reached out to jumped at the chance to help Jolie.  Within a week of contacting people for donations and sponsorships we blew past our goal.  We knew it was growing and didn’t know where it would stop, so a new goal was set to possibly reach $25,000.

On Friday, October 8, 2021, even as I pulled up to the lot the night before the show, I kept thinking, “Oh my gosh, no one is going to come.”  As I turned the corner two hours before a dinner we were having the night before the show, I was in shock as there were already 15 trucks on the lot!  That night, we hosted a Driver Appreciation Dinner to thank everyone for coming.  Jim McClure from Panelite did a shrimp boil, and Diamond K Repair roasted two whole hogs for pulled pork nachos and tacos.

The next day, on Saturday, October 9, 2021, Terry and I hosted the first-ever Show & Shine For A Special Kind Truck Show at Mineral Area College in Park Hills, MO.  With a temp of 85 degrees and sunny with a breeze, it turned out to be a gorgeous day.  In attendance we had 93 registered semis that came from as far away as Maine, Texas, and South Carolina.  Along with the trucks, there was a silent auction, a 50/50 raffle, and craft vendors.  At the awards ceremony, we presented Ashley Smith with The Little Learners Spectrum Center a check for $40,000!  I had to recount at least five times to make sure I didn’t make any mistakes.  Afterwards, we were told by some of the toughest guys in the crowd that our story and the donation brought tears to their eyes.

Another specialty award for The Loudest Train Horns was given out by Robbie Welsh.  Robbie and his family are also a family that we’ve met through truck shows and Robbie is also on the Autism Spectrum.  That kid lives and breathes trucks, and train horns are his favorite.  He handmade his own trophy and it was given to Tim Braun and his 2021 Kenworth W900L.

Jacob Bonham and Billy Sims with Tri-State Vacuum & Rental, LLC gave out their “Hatermade” award to a trucker, not necessarily an owner, who has really dedicated their time and effort into getting their truck to the place they envision and who has strong family values.  The recipient of their award was Brandon and Cortney Davis and their two sons, Rooster and Tyler (I featured this truck and family in the August 2021 edition of 10-4 Magazine).

The evening ended with a light show and a concert by country artist and fellow truck driver Tony Justice.  John Highley, a local man that hauls equipment for Tony Justice, approached us early on in our planning about having Tony at our show, but after looking into it, it just wasn’t in our budget.  With our show being the first in John’s hometown, he wanted it to be successful and wanted his friend and hero of the road, Tony, to be a part of it.  On October 1st, John called us from the Mayberry show and was so excited to tell us that, after doing some talking, Bennet Family Trucking was going to sponsor Tony to come play at Show & Shine For A Special Kind in Missouri.  It was such an honor to have Tony as part of our very first show.

We wanted to have a truck show about the trucks, where everyone could just hang out and sit and talk with their neighbors and relax.  It had been said a few times that our show had the feel that Joplin used to have before it got so big.  That was a great compliment!

Terry and I would like to give a great big “thank you” to our sponsors, spectators, friends, and family that showed up, donated, shared Facebook posts, printed our fliers and handed them out at other shows, and all the businesses that helped out with whatever else was needed.  You all are amazing, and this wouldn’t have been possible without you!  Mark your calendar now, as next year’s dates have been set.  The two-day show is scheduled for October 7-8, 2022.  We hope to see you there.