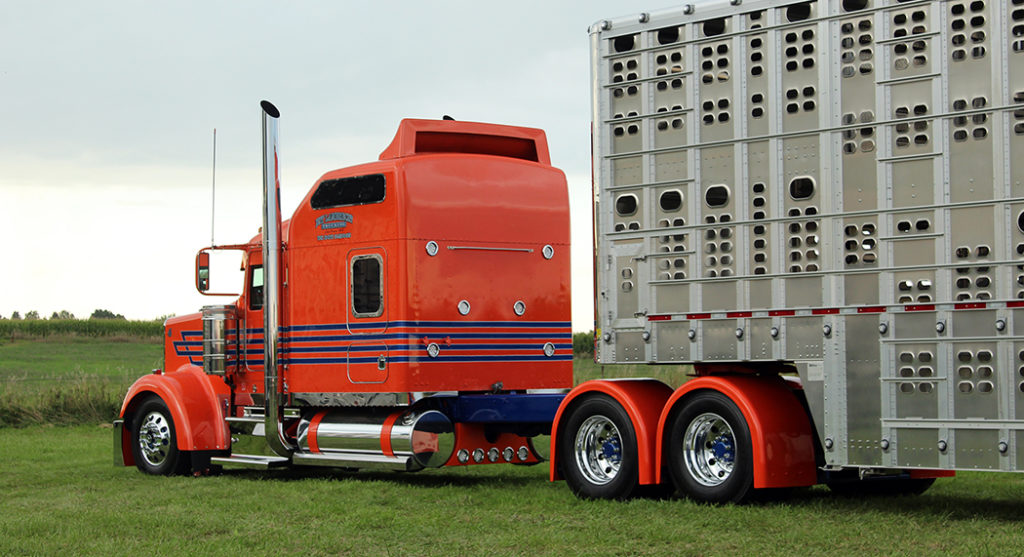 As many old timers retire or leave the industry, it’s nice to know there are some capable young people willing and able to be the next generation in trucking.  I met Tanner Lambrecht at the 2021 No Coast Large Cars Truck Show in Britt, IA over Labor Day weekend.  As I was walking the show field, photographing all the beautiful trucks and speaking to the owners of all this nice equipment, I happened to roll up on a striking orange and blue W900 Kenworth hooked up to what looked to be a new 2020 Wilson cattle pot trailer.  After a few minutes of speaking with Tanner, asking questions about his equipment, I was impressed with this young man from Long Prairie, MN and how he carried himself.

One of the ideas we at 10-4 came up with this year was to design a “Best of the Best Pick” award to be presented at selected truck shows we attended.  One of the trucks shows we chose to do this at was the No Coast Large Cars Truck Show held on Labor Day weekend in Britt, IA.  We partnered with Carl at Rockwood Products to make a unique trophy to present to that special truck and owner deserving of this new award.  Along with the trophy, the recipient also earns a feature story in a future edition of the magazine.  Tanner’s Kenworth was deserving of this award and selected for the 10-4 Magazine “Best of the Best Pick” award.  And this is his story!

I would like to share with you what I learned about Tanner, his family, their family trucking business, and the clean 2004 Kenworth W900 that he and his brother Jesse brought to the show.  One of the surprising aspects of Tanner is his age.  I was surprised to learn he is only 17 years old – not yet old enough to even have a CDL for driving intrastate.  At just 17 years young, Tanner appears older and more mature than his actual age.  Tanner was born February 4, 2004.  He is one of five children of Jeff and Julie Lambrecht, who call Long Prairie, MN home.  His father Jeff is originally from Long Prairie and has lived there all his life, while his mother is from nearby Bolivia, MN.  Tanner told me his mom and dad met at Clearwater Truck Center in Clearwater, MN and then got married in 2003.  Tanner has four siblings – three brothers (Jesse, Hayden, and Aiken) and one sister named Ana.

Tanner is now a senior at the Long Prairie-Grey Eagle Thunder high school located in Long Prairie, MN.  He is very active in school and a two-sport athlete.  In the fall, he was a starting linebacker on the high school football team.  As most everyone knows, ice hockey is a very popular sport in Minnesota and the upper Midwest.  Tanner is also a starter on the high school hockey team as a defenseman.  While talking about his hockey team, he mentioned that one of the people who he respects and looks up to is his hockey coach, Chad Worman.  I asked him what his favorite subjects are, and he jokingly replied, Phys Ed.  But he added that he liked the welding and math classes he has taken, too.  He also participates in a work study program.  Tanner’s schedule allows him to attend his classes in the morning and work in his father’s shop in the afternoon.

In addition to his love of trucks and trucking, another interesting aspect to Tanner’s life is that he operates his own polishing business.  Starting out hand polishing trucks in 2018 when he was just 13 years old, Tanner’s polish work is focused on aluminum truck and trailer rims, air and fuel tanks, aluminum rails and doors on livestock trailers, and other miscellaneous aluminum and stainless parts.  During good weather, Tanner can polish 3-5 trucks a week.

After about four years of polishing by hand, he graduated to polishing with machines and now uses several variable speed grinders, low speed buffers, and palm sanders.  I asked Tanner where he learned to polish with machines, and he said it was a combination of Evan Steger’s YouTube training videos and OJT (on-the-job) experience.  I further inquired on what polishing products he uses, and he exclusively uses Evan’s Time 2 Shine products.  Evan is a master polisher who owns Evan’s Polishing & Detailing out of Chilton, WI and is a very good friend to 10-4 Magazine.

Lambrecht Livestock Trucking was founded by Tanner’s grandfather Kenneth “KJ” Lambrecht and his dad Jeff in 1993.  The family-run trucking business exclusively hauls livestock including black Angus feeder cattle, dairy cattle, and sometimes longhorn cattle.  Occasionally, they haul bison, goats, hogs, and sheep to various state and county fairs, as well.  However, their primary focus is hauling cattle to feed lots, cattle farms, dairy farms, and beef production plants.  Their major trucking lanes are the southwestern and western parts of the United States, particularly Kansas, Nebraska, the Dakotas, Texas, and Canada.  Tanner pointed out that they do not run to the east coast and are not involved with grain hauling.

The Lambrecht truck fleet consists mostly of KW tractors, along with a few Peterbilts, and one Volvo.  Most of the fleet consists of owner operators.  They have a total of 21 trailers and all but two of them are Wilson trailers.  Something I learned in my talk with Tanner about the family business is that livestock hauling is exempt from e-logs.  I did not know that!  I asked him besides the tractors, what’s the next highest expense, and he said it was the cost of a new livestock trailer.  For example, in 2021, the price of a new Wilson livestock trailer, if you could find one, was $115,000.  In 2022, the price of that same new trailer has now increased $23,000 to $138,000.  Finally, he said that fuel and insurance costs have gone up in 2021, but not as dramatically as the equipment costs.

The 2004 orange and blue W900 KW featured in this article was originally purchased new by Tanner’s father Jeff in 2004 from Clearwater Truck Center in Clearwater, MN.  It was built with a 550-hp Caterpillar engine, an 18-speed, 3.25 rear ends, an 86” Studio Sleeper, and 22.5 low profile wheels.  His father personally drove the KW from 2004 to 2010.  He then moved into the office to run the growing family business.  From 2010 to 2013 his oldest brother Jesse and cousin took over driving the truck.  In 2013, the Kenworth was taken off the road, and then a full restoration process began two years later in 2015.

The first step in the restoration process was the entire cab and sleeper were repainted with an orange paint base.  Two viper blue stripes were added and then outlined with bright silver.  The paint work was completed by Harold Lezer, owner of Lezer Painting in Foley, MN.  In 2019, two additional viper blue stripes were added to both the cab and sleeper.  In 2020, the inside of the hood and the backside of the bumper were also painted orange.  The Lambrecht shop then installed new color matched WTI fiberglass single hump fenders over the drive tires, which were also painted by Lezer Painting.  The next big upgrades were stretching the wheelbase to 316” long, painting the chassis and frame blue, and adding a new deck plate.  Valley Fabrication & Repair in Breckenridge, MN completed all this work.

Additional exterior upgrades were installed including new tanks, grille, and steps from 4 State Trucks, cab and sleeper drop panels and lights from RoadWorks, air cleaner lights from Shift Products, stainless elephant ears, chrome headlight trim, and KW badging from Clearwater Truck Center.  Finally, the interior upgrades installed were chrome dash switches and blue watermelon lights.  A full interior upgrade is planned in the spring of 2022.  This work will be completed by One Of A Kind Customs in Sigourney, IA.  Tanner said at this point, the full restoration of the family’s 2004 W900 will be finished – for now!

The shiny trailer is a 53-foot 2022 Wilson triple axle livestock trailer.  It has a Hendrickson suspension, disc brakes, and rides on low profile 22.5 Alcoa aluminum wheels.  The front and rear of the trailer have smooth stainless panels that Tanner has painstakingly buffed out and polished.  One more final touch was color-matched vinyl on various parts of the trailer, including the company name on the front, done by Nick Saarela out of Long Prairie, MN.

One of the factors in the continued success of trucking is the development of the next generation of drivers and owners that have a passion to be more than just steering wheel holders.  The first challenge is finding young men and women who are interested in and have the desire to be a part of the trucking business.  The next challenge is to train, encourage, and support these young drivers, and provide them with excellent opportunities.  I would argue there is no better time to get into trucking than now.  However, there are many challenges to go along with these opportunities.

Hauling livestock in the upper Midwest is a hard business filled with constant challenges.  For the health and success of our country and trucking, we need smart, focused, determined, and well-trained young drivers like Tanner to start taking the wheel.  Along the way, Tanner has had outstanding mentors and teachers, like his grandfather, his dad, and his brother Jesse.  With help from all these caring people, Tanner Lambrecht will play a critical role in ushering in the next generation of real truckers.