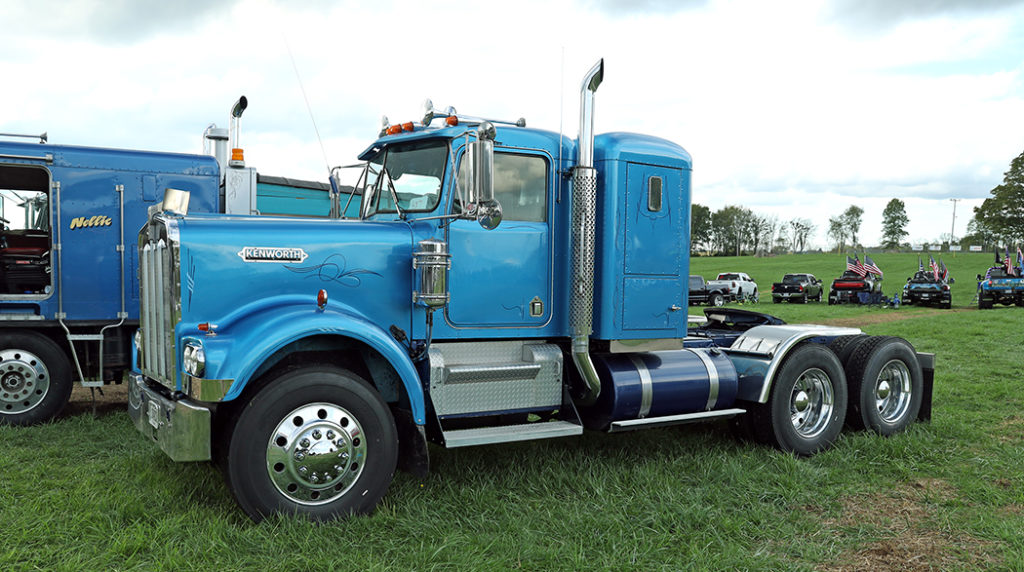 As the 2021 truck show season was starting to wind down this past fall, I happened to see a flier for a new show that was a cancer benefit in Randolph, OH.  Anytime a new show pops up, there is always a certain amount of doubt and questions.  What is the show all about?  What kind of things will be going on during the show?  And most importantly, what kind of trucks (and how many) are going to come?  This flier was put together very well and had some sharp looking trucks on it, so I decided to take a chance and check it out.  And it turned out to be a great success.

I found out a local guy I know named Bill Long was at the show, so I called him to find out how it was going so far.  He told me there were about 60 trucks already there and more were still coming in.  I have noticed that a lot of shows have their predictable trucks that attend each year, but with this being a new show, I was intrigued by what might be there, including a different class of trucks that attend other events in this area of northern Ohio.  So, I headed to the Portage County Fairgrounds on September 25, 2021, to see for myself what this event was all about.

In 2003, Mr. Flaherty started to raise money for the Lance Armstrong Foundation via pledges for an annual 100-mile “Ride for the Roses” event in Austin, Texas.  It was at the awards dinner that the idea of having a golf outing came about.  Then, in 2004, the 1st Annual Golf & Auction was started with MSKCC named as the beneficiary and the dream of paying MSKCC back for their efforts with Denise.  Each year the golf event grew in size, quality, and revenue.  In 2010, when the idea to split the proceeds between MSKCC and families struggling with the financial burdens of battling cancer was born, the Denise Marie Flaherty (DMF) Memorial Foundation was financially able to make an even more positive difference.

Heidi J. Benjamin, an Ohio Event Coordinator and Board Member for the DMF Foundation, has worked in the trucking industry for 40 years and is self-educated and self-motivated in everything she takes on.  Her experience in the trucking industry includes various accounting operations, dispatching, and recruiting/sales at William Benjamin Trucking out of Mantua, Ohio.  Heidi is a mother of four wonderful children, has lived in farm country her entire life, and wouldn’t change it for anything.  In addition to her incredible contributions to DMF, Heidi is also an active member in her local 4-H program.  Heidi stated that life has been good to her, and the rest of her journey will be focused on helping others in every way possible.

So, how does all this relate to a truck show?  The DMF Foundation’s outings are always golfing events, but this year Heidi, in addition to the golf event, wanted to do something different.  Being involved in trucking, and knowing a lot of people in the local community with trucks and many small trucking companies, she thought, “Why not have a truck show?”  And so, the 1st Annual DMF-OH Truck Show was born.

A week before the show, Heidi was getting messages from many that the weather forecast looked horrible.  Most people thought she should cancel and/or reschedule the event.  Being a positive person and a believer, she refused to give in and cancel because she had a feeling that things were going to work out.  After traveling to Trailstar International in Alliance, OH on Friday with her son Olin to get a display trailer for the show, they headed back to the fairgrounds.  Along the way, she noticed a farmer mowing hay.  Being a farm girl, she knew that it wasn’t going to rain.  Why?  No farmer mows their hay the day before a big rain.  And she was right!

Mike Lechene, who was the founder and owner of Lechene Trucking of Huntsburg, OH, passed away at age 51 after an 18-month battle with cancer (a brain tumor).  Starting out as a one truck operation, Mike had been a part of the local trucking community in this area for his entire adult life and was a friend to many.  When Heidi was planning the show, she was determined that Mike and his company would be a focal point.  Mike was a trucking legend to us all and he is dearly missed.  He was one of the beneficiaries of this year’s golf outing and truck show.  And being able to raise $16,000, at an event put together in just two months, was amazing!

Bob Young Jr. and his son-in-law Adam Spahr brought out two very cool trucks – one was a blue 1980 Kenworth W900A, and the other was a very cool blue 1972 Kenworth K100 double bunk cabover, which was definitely a real conversation piece.  The K100 had the long ladder steps on the side of the cab, which were used from 1983 on, along with a three-piece roof, and had the old school crooked KW emblems on the grille.  The cabover also has the Seattle interior package.  Bob just bought the cabover two weeks before the show, and it is a really clean truck to start with.

While walking around, I noticed a guy wearing a 10-4 Magazine shirt.  When I passed by him, I turned around and shouted, “Nice shirt!”  When he saw that I was wearing a 10-4 sweatshirt we got to talking.  Turns out he (Max Speier) is a big 10-4 fan, and he also won the Best of Show award in the Combo Class with his beautiful white 2021 Peterbilt 389 and 2014 MAC trailer.  Max has been leased on to Jaro Transportation Services of Warren, OH for 20 years.  Thanks for your support, Max!

Jeff Miller and his two-tone green truck were definitely not overlooked at this show.  Jeff and his 1958 Peterbilt 351 were featured in an article titled “Almost Overlooked” in our December 2019 issue submitted by yours truly.  At the show with his wife Toni, Jeff came out all the way from Elyria, OH.  For his efforts, he was awarded with a 2nd place in the Bobtail Class.  Jeff’s truck got a lot of attention during this show.

That local guy I had mentioned earlier, Bill Long, in addition to trucking operates the BLT Chrome Shop.  He has a 2016 Peterbilt 389 glider, powered by a Cat 6NZ, with almost 900 horsepower!  This truck is known as Street Rod II.  It also appeared as a feature called “Bill’s Business Card” in our June 2017 issue submitted by Chad Violet.  Bill’s clean dark blue Peterbilt earned Best of Show in the Bobtail Class.  Lastly, the People’s Choice award went to Cody Touchton of Top Notch Transportation for his 1994 Pete 379.

All in all, I was really happy that I took a chance and checked out this new show.  I am also pleased to announce that the DMF-OH2 Cancer Benefit Truck Show and Truck Pull will be held on Saturday, September 24, 2022, once again at the Portage County Fairgrounds in Randolph, OH.  There will be a truck show in the afternoon and a truck pull that night.  Mark your calendars now for this fun event that raises money for great causes, as well.  It’s going to be a big day, for sure, and I can’t wait!