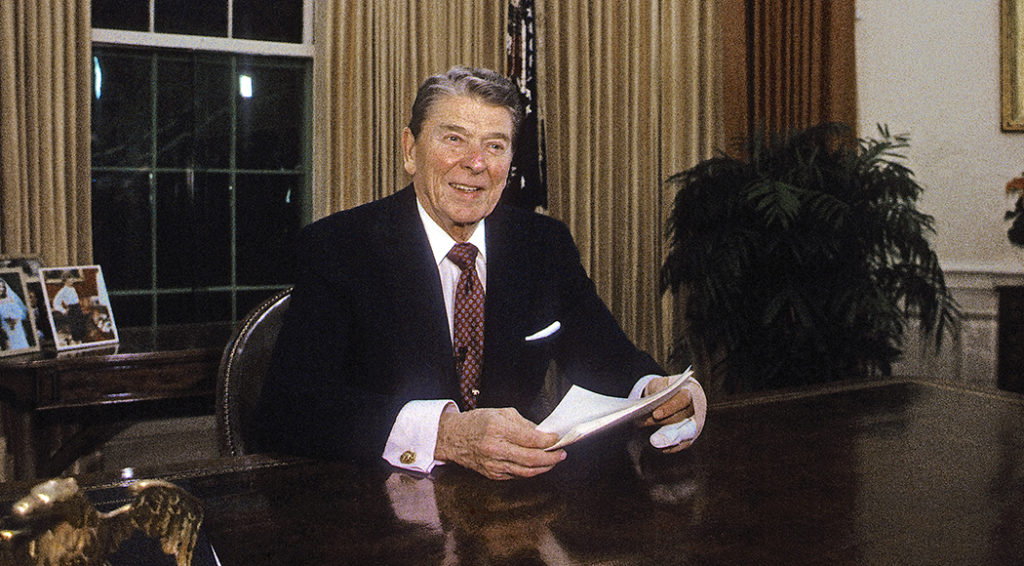 Born on February 6, 1911, Ronald Reagan later stated, “The most terrifying words in the English language are I am from the government, and I am here to help.”  He was one of the most favorite Presidents of the 20th century.  His beginnings were humble and honorable.  The 40th President Ronald W. Reagan was known as the great communicator.  Most people would be secure in succeeding in one or two professions, but Reagan kept moving up the ladder of life.  After college he became an actor.  While he was in the entertainment business, he also became president of the Screen Actors Guild.  These two jobs led him to become a good public speaker, being the head of the Screen Actors Guild during the time of the communist trials.  After dealing with the McCarthy era, most people would hang up their hat, but not Reagan.  It opened his eyes and caused him to slowly change from liberal thinking to conservative ways.  After that, he became a spokesman for General Electric (GE).  This brought him into our homes via TV and made his name, face, and voice familiar to most Americans.  Many people would say they had reached their pinnacle at this point, but not this man.  The State of California reached out to Reagan.  The Republican party needed a well-known and stable person to run for governor, and they made Ronald Reagan their candidate.  He became the Governor of the State of California in 1966, was re-elected in 1970, and improved the state by turning deficits into surpluses.  There was only one pinnacle left to achieve after that – the Presidency of the United States.  In the Presidential election of 1980, Ronald Reagan won 489 electoral votes to Jimmy Carter’s paltry 49.  Sixty-nine days into his Presidency he was shot by an assassin, and even though he was shot near the heart, he survived and served another term.  He did many things to build confidence in the American people and was instrumental in bringing down the Soviet Union.  He governed with peace through strength and was successful.  His quotes were filled with wisdom that made one think.  He said things like, “Government’s first duty is to protect the people, not run their lives,” and, “We the people tell the government what to do.  It doesn’t tell us.”  One of his most famous quotes was, “Freedom is never more than one generation away from extinction.  We didn’t pass it on to our children in the bloodstream.  It must be fought for, protected, and handed on for them to do the same.”  Thank the Good Lord for Ronald W. Reagan and may wisdom of his stature prevail in 2022.

Be Confident In Yourself
The Great White North
Keep Pushin’ On!
A Reflection Of You
Summer Tour 2022