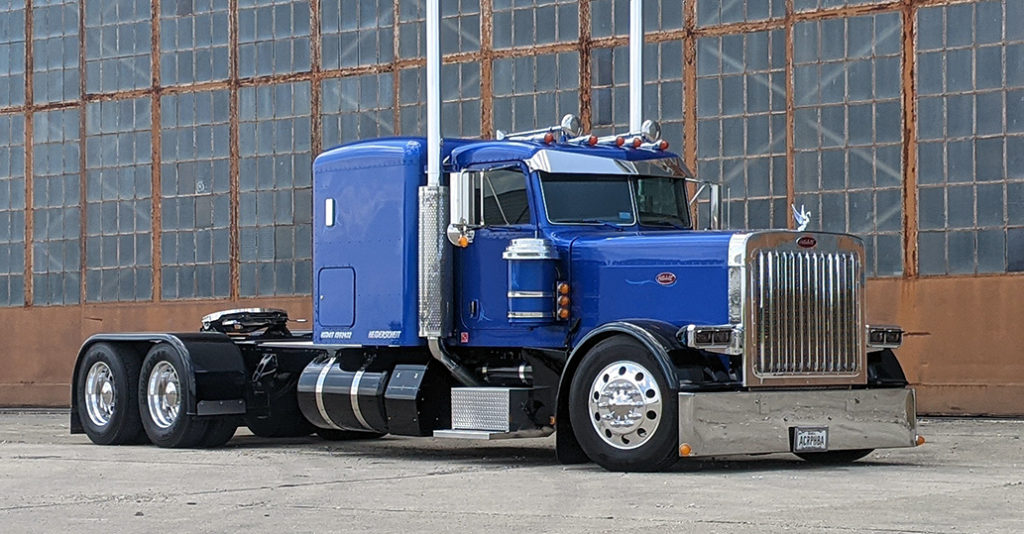 This month’s “creation” was ordered for Jeremy Heiderscheit (46) of Peosta, IA.  After the truck came in, Jeremy took it home, along with several of our parts, and then did most of the customizing himself.  Married to his wife Michelle for 22 years, they have two sons – Nate (17) and Pete (15).  Operating Heiderscheit Trucking LLC, Jeremy is a single-truck owner operator that typically pulls an RGN trailer.  Our friendship goes back over 20 years, and he has ordered more than one truck from me over that time.

One of three boys from parents Jack and Carole, who live in Dubuque, IA, Jeremy has two younger brothers – Josh works in the refuse business and Jamie is a diesel tech.  Jeremy’s dad Jack worked at a towing and repair outfit, and eventually bought it.  Running it for another 22 years until he sold it in 1999, the company peaked at 14 tow trucks.  After that, he became a manager for the local Penske truck rental location and recently retired.  His mom Carole worked in the towing business office and was also a stay-at-home mom.  But even though Jeremy grew up around trucks, his initial desire was to be an architect/engineer.

Meeting his wife Michelle in 1997 through a mutual friend, the two got married in 2000.  Michelle worked as a dental hygienist until their son Nate was at daycare and started taking his first steps.  At that point, she decided she wanted to spend more time at home, so she quit working.  This decision was truly a blessing for their family, as Michelle is the glue that holds it all together.  Today, she does the office billing and manages all things related with the family at home.

Working at a local feed store, around the time he turned 18, their delivery driver quit, and the manager asked Jeremy if he wanted to get a CDL and make their deliveries.  He agreed, and after a few test drives, they helped him get his license.  Not long after that, he went to work for a local logging company, until he got T-boned in Illinois.  Even though the accident wasn’t his fault, the company still let him go.  He then went to another local logging company and drove for them until he was 21.  About a year later, he left there and started driving a 1996 Peterbilt hooked to an end dump.

At 22 years old, Jeremy’s parents helped him get his first truck – a 1995 IHC 9400 – which he used to pull an end dump.  Later, he switched to pulling a curtainside trailer.  In 1999 he traded that first truck in for a 2000 IHC 9990i painted Heiderscheit Blue, and he’s been blue ever since.  He hauled curtainsides or flatbeds with a side kit until 2002, when he decided to order a new Peterbilt 379.  Ordering it from his local dealer, he was disappointed that he couldn’t get some of the options he wanted.  He met Neal Dykman at a delivery and noticed that his truck had some of the things he wanted, so he asked him how he got that stuff.  Neal said, “I don’t know.  Call Clint Moore.  He would know.”

When Jeremy called me, he had already ordered his truck, but I went ahead and helped him with the specs so he could get what he really wanted.  Jeremy was so appreciative that I helped him that he promised me that he would call me to order his next truck.  And he did.  In 2014, I ordered him a 2015 glider we called “Promises Kept” for obvious reasons.  When the glider kit showed up, Jeremy used my good friends Kipp and Gentry to put it all together.

A few years later, Jeremy decided he needed to buy something legal to run in California, so he came down with Neal to spec his next new truck.  “Promises Kept Too” is a 2020 Peterbilt 389 with a 63” flattop and an X15 Cummins with 2050 torque.  Painted a beautiful metallic blue (that is just a shade off the typical Heiderscheit Blue on his other trucks) on top, the bottom and frame were painted black.  When the truck showed up, Tyler moved the exhaust to help make things better for the APU and rerouted the plumbing.  Since work was slow at the time, Jeremy decided to make this build a family project.

After hauling it home and tearing it down, he and his son Nate did all the modifications, including installing one of my body drop kits.  He then hauled it to River States in Wisconsin and had them do some paint work, including the frame and door jams.  Then, it was taken back to their shop for final assembly.  Jeremy also had WTI paint and install the rear fenders.  Other modifications include an interior kit from Spare Time Fab, shaved double-square headlights, and 6” dummy stacks with heat shields.  Keeping it old school, he opted for old-style boxes, horns on the roof, and classic breather lids.

Since finishing the truck, Jeremy has visited me often, and I have to say, this thing is slick.  The Heiderscheit family and their friends did an awesome job.  He wanted to say “thank you” to his parents for helping him get started, and for everything else they have done for him.  He also wanted to thank Neal, Jim, Big Bux, Kipp, Gentry, Tyler, CMoore (that’s what he calls me), and especially his wife Michelle, for putting up with him.  Jeremy also wanted to give a shout-out to his customers, because without them, none of this would be possible.  But, most importantly, praise to God for all the blessings in his life.

When Jeremy makes a promise, he is a man of his word.  I am beyond happy to have him as a friend, and always enjoy our time together.  This truck, and the one before it, are both proof that “Promises Kept” is more than just a headline – it is a way of life for Jeremy Heiderscheit.

Leci Trailer Dolly for Langfahrzeug
2019 Ram 1500 after 175,000 Miles of Ownership | Truck Central
Be Confident In Yourself
6.4L HEMI V8 in a Dodge Durango | Truck Central
A Reflection Of You