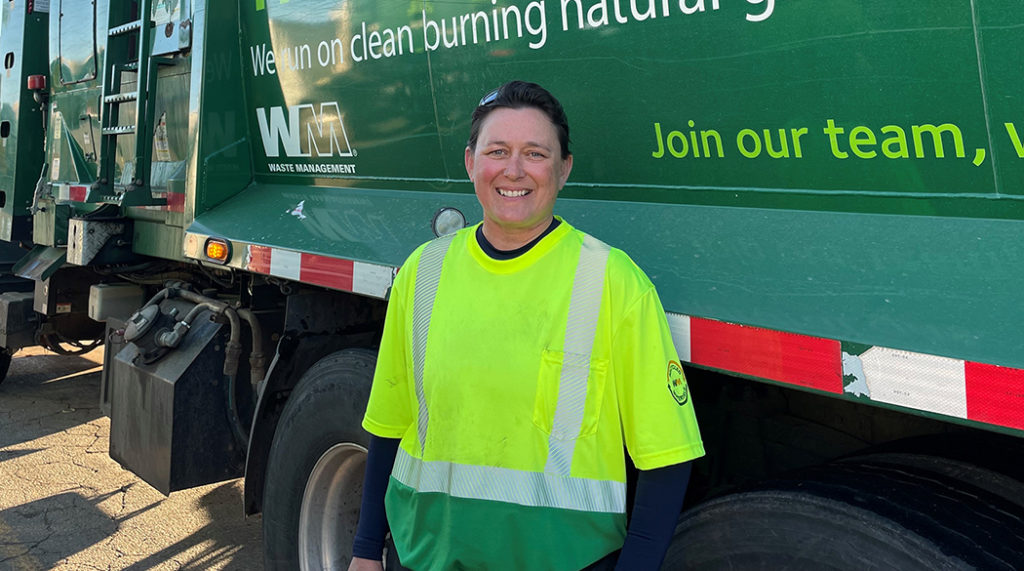 The Women In Trucking Association (WIT) has announced Ginger Pitts as its March 2022 Member of the Month.  Ginger is an Automated Side Loader (ASL) Recycling Truck driver for Waste Management (WM) in Oklahoma City.  Ginger is a native Oklahoman who grew up in Enid and moved to OKC about seven years ago, and she has quite the entrepreneurial spirit.  Running a restaurant in Enid for almost 20 years before changing careers and starting a business, she began transporting pets of military families across the country from one duty station to the next, because pets aren’t included in the moving process.  Ginger visited nearly every state before being injured while acting as a good Samaritan helping a stranded motorist.  While recuperating from a shoulder injury, Ginger started training to drive a school bus.  The training she received put her on the pathway to becoming a truck driver.  As a child, she loved watching the trash trucks empty the large metal cans and throw them around like they weighed nothing, but she never dreamed of driving a truck.  Ginger drove a school bus and loved interacting with the children, but in May 2020 the district shut down because of the pandemic.  Seeing a sign that WM was hiring, Ginger decided to apply.  After being hired, she felt like she had found her niche!  Each day her mission is the same – empty an estimated 900 carts and return each one to its original place without any damage or failure.  A big benefit of the job is the smiles she receives from the children on her route.  Ginger always waves or honks the horn for them.  One young boy on her route draws pictures all about the recycling truck and the recycled items.  He leaves the pictures on the cart, and she keeps them in her truck and on her refrigerator at home.  One thing most people don’t know about Ginger is that she is in Oklahoma’s Amateur Softball Association (ASA) Hall of Fame.  She received this honor because of her skill as a shortstop for over 35 years in Oklahoma.  Ginger loves her job and encourages other women to join, saying, “Don’t hesitate!  Women can do anything!  It’s a great industry!  Jump in and enjoy the ride!”  WM is a sponsor of the Salute to Women Behind the Wheel, an event hosted by WIT to celebrate female CDL holders on Friday, March 25, at the Mid-America Trucking Show in Louisville, KY.  Women In Trucking, Inc. is a nonprofit association established to encourage the employment of women in the trucking industry, promote their accomplishments, and minimize obstacles faced by women working in the trucking industry.  Follow WIT on Twitter, Facebook, or LinkedIn.  For more information, visit www.womenintrucking.org or call 888-464-9482.