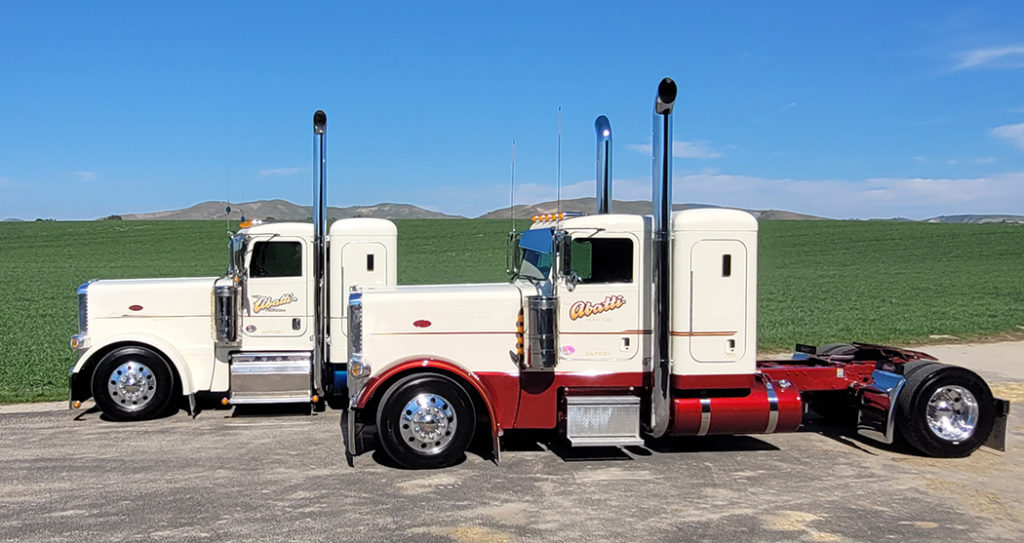 This month’s cool creation is actually two trucks – the latest one was built for Gary Abatti (64) of Gary Abatti Hay Co. in Paso Robles, CA and the other was built for his son Jeff (40) about five years ago.  Gary’s new ride is the cream and burgundy rig, and Jeff’s is the cream and blue one.  I originally wanted to do a story on Jeff’s truck when they first got it, but it just never worked out.  Gary’s truck was secretly ordered, and they surprised Jeff with it when it arrived.  After 47 years of trucking, it is the first new truck Gary has ever bought for himself to drive, and I thought it would be cool to feature them both together here.

Son of Delmo and Joyce Abatti, Gary’s dad Delmo worked every day in the hay business until he died 11 years ago.  His mom is still with us, and really likes the colors on Gary’s new rig.  Gary is one of five siblings, but he and his brother Anthony were the only two to get the trucking bug, and both haul hay, like their dad did.

Married to his wife Margo for 43 years, she and Gary were high school sweethearts.  After graduating from high school where he grew up in Arroyo Grande, CA in 1975, Gary started driving for his dad in their old 1966 Peterbilt COE truck and trailer.  At that time, Gary was working up by Lockwood a lot, and Margo worked at a bank in San Luis Obispo.  Getting married a few years later, they decided to relocate to Paso Robles because it was right between where they were both working.  They have since made it their home, and still live there today.  Margo wound up working at the Paso Robles School District and eventually retired from there.

Family is a big part of Gary and Margo’s life, and they have two children – son Jeff (40) and daughter Meghan (38).  Jeff, as mentioned before, works with his dad and drives the cream and blue Peterbilt.  Jeff and his wife Kristi have four children – Aiden (13), Ethan (11), Grace (8), and Bryce (6).  Meghan is married to Brian Herd, and she works for Associated Feed in Turlock, CA as a Merchant Buyer.  Meghan and Brian have one daughter named Lainey (3).

While still driving his dad’s old Pete, Gary purchased a 1971 Freightliner two axle COE with a 318 Detroit.  At the time, he hired a driver for it, and hauled grapes.  By 1977, this side hustle, hauling grapes, was getting busy, so he told his dad he was going out on his own full time, and hasn’t looked back.  At one point, his operation grew to seven trucks, and for a while, he even had a few dirt trucks, as well.  But today, he is down to four (one of them is his dad’s old ‘66 Peterbilt that he used to drive which he got after dad passed away).  Their old colors back then were a beautiful burgundy with gold stripes.

These days, Gary and his son Jeff work together.  They both like nice, clean, shiny trucks, and both are completely dedicated to the trucking industry.  When asked about other drivers, Gary replied, “Right now it’s just the two of us,” but they kind of like it that way.  Most people know I have a soft spot for cool two axles and have even been known to give them a hug when they show up.  They get a lot of attention in Kansas because nobody besides the big freight companies run them out this way.  But I like to tell them, “They will be alright once we get ‘em dressed up for work.”  I love my job!

When ordering the first truck five years ago, I mostly only talked to Jeff.  When Gary decided to secretly order himself a new truck last year, he called me, and we hit it right off – he is a fun guy.  Gary wanted the new truck to be a surprise for Jeff, and I have to say, keeping it a secret was hard, but fun.  Since these two men work together each and every day, much of our communication was done via text messages, but it was a successful endeavor.  We got the truck in, customized it, and delivered it to California without Jeff knowing about it.

The two single axle Peterbilt 389 long hoods are very similar – they both have big power Cummins engines, 13-speeds, 36” flattops, and all the good stuff, from top to bottom.  Gary’s has small battery boxes and dummy pipes for ease of keeping clean.  No corners were cut on either of these cool west coast rigs.  Jared in our shop was in charge of building Gary’s truck, and it turned out sweet.  Besides the different lower colors, these trucks are almost identical, and they look great parked together.

Not one to brag, Gary is all about customer service.  I was told that when he delivers a load of hay, it is stacked to perfection, so it looks good going down the road.  And when they unload, he stacks the hay just the same.  This man does not know the word “no” and does whatever is needed to get the job done.  He loves his job and his new truck, and I am so happy I could help make Gary’s dream come true.