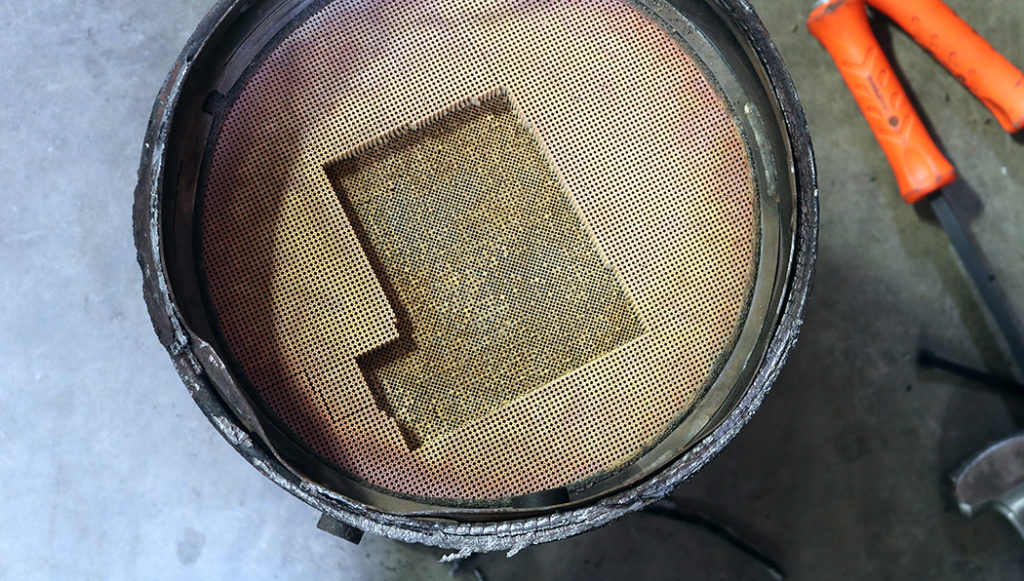 In the span of two weeks, we have seen the same failure on two different trucks.  These engines were different model years with different after-treatment configurations.  One had a DPF and SCR, while the other only had a DPF.  The failure is the DPF outlet cracking horizontally and vertically, resulting in large chunks of DPF falling off into the exhaust system.  The photos of the failures shown are also on our social media pages if you are interested in looking closer.

In both of these cases, there were no fault codes indicating that something had happened to the filter.  The issue was only discovered upon physical inspection (but this is actually a pretty common type of failure).  A cracked or slightly melted filter will still perform but will not be nearly as effective.  When the temperature in the DPF rises quickly or uncontrollably, the filter will crack.  You could also crack a filter if you were pulling a very long hill and then suddenly came to an idle.  The elevated temperature causes the soot to burn rapidly.  When you stop this process by abruptly coming to an idle, the filter cannot cool down enough because the exhaust flow is too low.

Every driver on the road should know that pulling a hill and then shutting your engine off is not good for your turbo.  Take the idea of rapidly heating and cooling metal.  Cool that hot metal down too fast, and it becomes brittle, having a greater chance of catastrophic failure.  The idea is similar to your DPF, but it needs more than idle to cool down safely.  High idle may suffice, but you need to slowly bring the temperature down to keep your DPF healthy.  This may sometimes require you to drive at a low load for a short period (we are talking about temperatures that can reach in excess of one thousand degrees).  It may sound like a time-draining inconvenience, but we can assure you that replacing hard-to-find expensive emissions parts is worse.

Another reason DPFs can crack is lack of regenerations or insufficient regens.  This happens when your filter is collecting more soot than it is burning off, and it usually means there is something wrong with the system.  Newer engines are better at catching this issue quickly.  When a DPF is overloaded and suddenly reaches a temperature where it can burn, it can devastate the emissions system.  It’s like having a massive pile of dried brush and lighting it with five gallons of gasoline.  It goes up in flames fast!  The same thing happens inside of your exhaust.  If your filter has a lot of soot, and when you finally do a regen or pull that hill after idling for 8 hours, you’re setting yourself up for a failure.  It not only harms your DPF, but it can also transfer that excess heat to the DOC (Diesel Oxidation Catalyst) and SCR (Selective Catalyst Reduction) systems.

A third example of catastrophic emissions failure was brought in only a few months ago.  This truck was being inspected for an issue entirely unrelated to emissions, but the owner made it clear that the system was only a few months old when brought in.  Once set up on the dynamometer and ran a couple of times, all seemed well with no signs of fault.  A second engineer joined in the process and monitored the ECM while the truck was driven.  On the first run, the engineer noticed that the DPF temperature was steadily building very quickly.  The truck went into an automatic shutdown state, and our engineers were left no choice but to start a physical inspection of the truck.

When all signs began to point towards the DPF being blocked, it was removed to find that it had indeed been completely blocked with ash.  The ash had ignited while being pulled down on the dyno, and when the intense heat of sixteen hundred degrees traveled to the DOC and SCR, it rendered them useless.  Our team eventually found that the shop that had initially warrantied this customer’s emissions system had installed it incorrectly.  It was also suspected that there was an internal issue with the motor that was causing it to produce excess soot, but it was still running within the high end of OEM specifications, which was preventing it from throwing any codes or derates.

Nightmare scenarios like this can be prevented by changing your driving habits, letting your truck regen if and when it wants to, and frequently having your DPF inspected.  Pull it down and look at it or have it looked at by a professional.  With emissions cleaning services such as Diesel Force and DPF Alternatives in reach of every driver, catching these issues early has never been easier – and will save you a lot of time and money in the long run.  If you have any questions or comments, call me or one of my engineers, Leroy or Jordon, at (724) 360-4080 or visit us online at www.pittsburghpower.com.