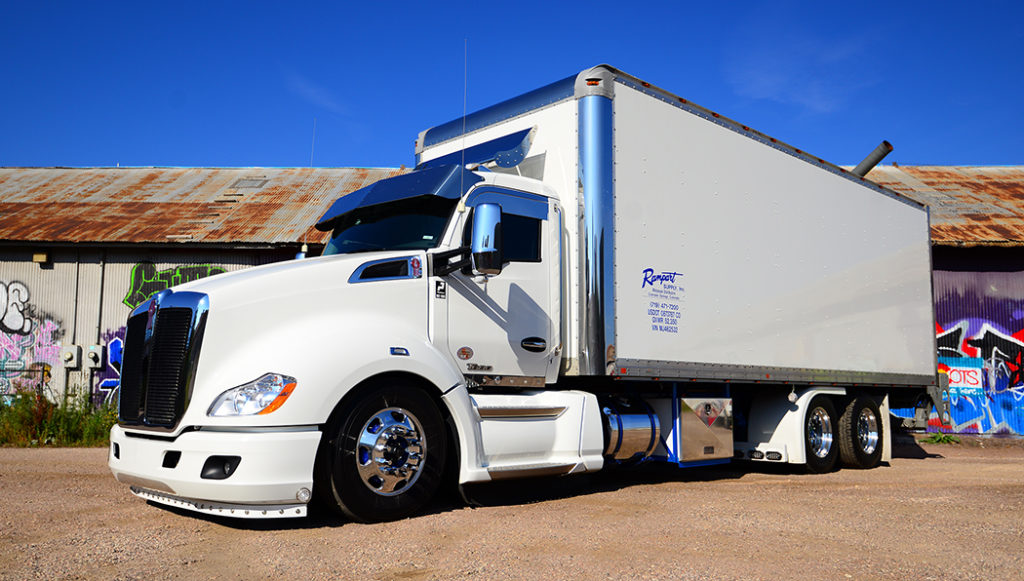 There are some trucks that just naturally lend themselves to chrome, customization, and personalization, and in many instances, there is even an entire culture surrounding those specific areas of trucking (think refrigerated, flatbed, bull haulers, stepdeck, etc.).  Finding polished and done-up rides in these sectors of trucking is no great challenge and, for many years, there’s even been distinct regional styles and looks you’ll often see.  Then there are those trucks you almost never see getting shined up.

In the world of box trucks, steel wheels, unpolished aluminum, and black plastic moldings are the modus operandi of most fleets and most drivers.  But that isn’t true for Robert Portaleos (47) of Colorado Springs, Colorado, and the tricked out T680 Kenworth seen on these pages.  Not only is it a head-turning box truck, but it’s also an aero truck, too!  Talk about rarer than hen’s teeth.

A Colorado native, Robert always loved trucks, growing up around them, and then eventually earning his CDL through USA Truck Driving School.  Originally driving for Lisa Motor Lines of Fort Worth, Texas, Robert realized quickly that the over-the-road lifestyle wasn’t for him.  Looking for something local, Robert found Rampart Supply, a local plumbing and contractor supply company in Colorado, looking for a Class B driver.  That was twenty-five years ago, and Robert has been with Rampart Supply ever since.

Started by Joe Perry back in 1968, Rampart Supply has been a Colorado institution for plumbing and heating supplies, along with related contractor goods, for over 50 years along the Front Range and throughout Colorado.  And with dedicated employees like Robert, it’s easy to see why the company has remained such a stalwart local business through the decades, along with their willingness and commitment to ensure the pipes, fittings, ducts and other goods get to the job sites and showrooms in style, thanks to Robert’s T680.  Currently operated by Joe Perry’s sons, James and Colin, Rampart is sure to continue as one of Colorado’s premier suppliers for homebuilders and contractors seeking to supply the highest quality of heating and plumbing in their structures.

In Robert’s 25 years with Rampart Supply, he’s run every route for them, mountain, urban and otherwise, and is familiar with their logistic needs from top-to-bottom and front-to-back.  And with that dedication has come reward, namely the 2021 Kenworth T680 in white with blue frame seen here.  Not to mention the job security that comes with being a dedicated employee, as well.

Fitted with a 450-hp X15 Cummins backed by a 10-speed Eaton-Fuller trans spinning 3.36 rear gears, the truck sits on a 272-inch wheelbase, low-pro 22.5s, and an air-ride steer axle, giving the truck a very laid out look.  The Kenworth also features a 57-inch Valley Chrome turbo wing, that Robert narrowed down from 64-inches to fit the cab, along with nine cab lights.  Other custom pieces include Talladega half fenders, custom light panels below the front bumper, painted to match hubs, a 14-inch drop visor, and 8-inch polished window chops.  Set in a high contrast white and blue paint scheme, the truck has an extremely clean and sharp appearance.

The interior is no less impressive than the exterior, as well.  With trim painted to match the white exterior, the dash features chrome gauges, as well as an evil clown air brake knob.  Interior modifications include an extended shift tower with an evil clown shift knob that matches the brake release valve, a painted (white) and polished steering wheel, and a matching marble tile floor that Robert installed himself.  Finished out with low profile seating, the interior impresses as much as the exterior.

And even though the cargo box on this KW may appear to be similar to so many other units on delivery trucks, the body on the T680 has seen extensive reconditioning, not only in the form of paint, but with polished corners and nose panel, as well as extra lighting on both the upper and lower rails.  The most noticeable feature of the box, however, is the highly polished stainless steel rear doors.  You’d be hard pressed to find many other box bodies with this level of customization and cleanliness.

This truck, however, has anything but a “traditional” look to it.  Although shifting designs in the industry are now pushing many drivers and owners to prefer the slope-nosed aero trucks, and with this has meant new styles and looks developing in how trucks are customized these days, they are still in the minority by comparison to the big hooded KWs, Peterbilts, Macks, Freightliners, Western Stars, and Internationals.  Compounded by being built as a box truck in high contrast, the truck has a lean but sharp tone to it, lending the truck well to an urban backdrop.  Finding some wild and colorful graffiti by the railroad tracks in Colorado Springs seemed like just the right backdrop for such a unique rig, with the stark white contrasting well with the rainbow of colors behind.

When Robert isn’t making all the deliveries (or keeping the T680 shined up and clean), he likes to spend time with his wife, Susan, and sons Hunter, Kyler, and Zakyah.  Beyond time with family, Robert also likes getting to the gym to workout, along with the tattoo parlor to get new ink.  And, like so many of us, if it isn’t those activities, it’s time for car shows, truck shows, and races.

Setting out to build a truck that would not only turn heads, but stick out from the crowd, Robert did precisely that.  The die-hard fans of the square hoods may not appreciate styles like the T680 seen here, but the one thing you can’t accuse Robert of is building another cookie-cutter chrome catalog conventional (say that three times fast).  As Robert likes to put it, “It isn’t cheap to look cool, and it isn’t cool to look cheap,” and we at 10-4 agree.

Robert would like to thank Colin and James Perry for their dedication to Rampart Supply, continuing the company their father built, and giving Robert the opportunity to build such a unique and wild rig.  Robert would also like to thank Brent Peterson at MHC Kenworth for his help in spec’ing the truck out and his patience in handling last minute changes on the order when Robert was weighing options on how the truck would get built.  Robert also sends thanks to Brandon and his crew at Richie’s, Inc. in Denver, along with Pat Donnelly, for all their help in fabricating custom pieces, as well as Zack and his team at Platinum Powder Coating in Colorado Springs for all the specialty powder coating work, too.

Most of all, Robert would like to thank his wife and his sons for all of their love, help, and support, professionally and at home.

Dedication and hard work can rarely ever be replaced, and Robert’s faithfulness to Rampart Supply is proof of this.  With that dedication and pride in your work and your job comes reward, and Robert’s cool ride shows the kind of reward that can be reaped.  There are few box trucks that stand out in a sea of liftgates and roll-up doors, but Rampart Supply and their driver Robert’s KW T680 does just that, giving not only the industry a good name, but Rampart, too.  But that is what thinking outside the box will do!