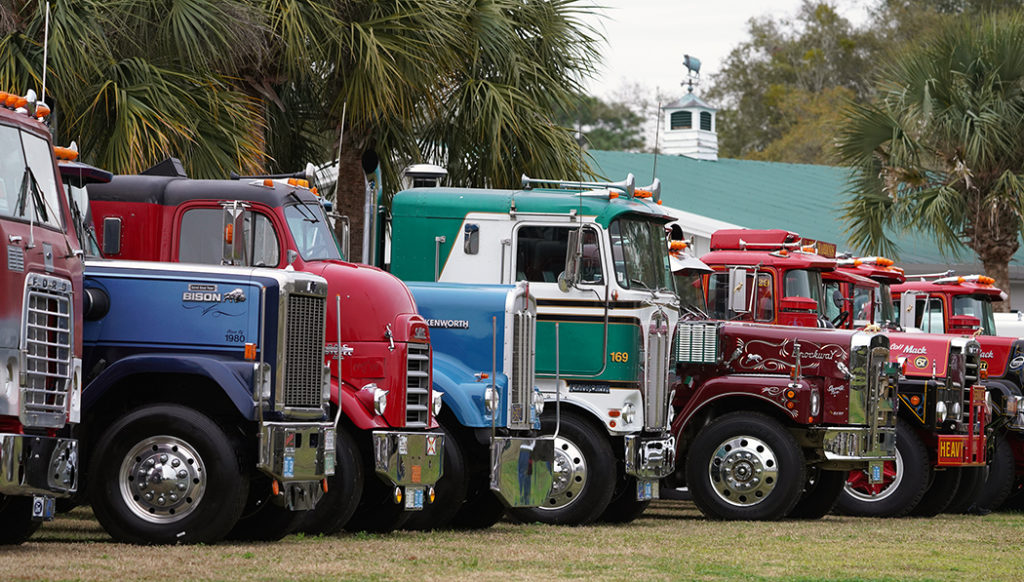 Antique truck shows from all across the country unite people who have a love for trucking’s past, as well as the trucks that were a part of it.  Vintage Trucks of Florida was no exception with their 9th Annual Truck Show.  Held in Leesburg, FL on February 17-19 at Paquette’s Historical Farmall Museum, there was a huge vintage variety of trucks for everyone to enjoy.

Since this show is in my home state of Florida and not far from where I live, I have been able to attend this show several times.  This is a spacious venue for a truck show, and the only traffic attendees need to worry about is foot traffic.  This show offers a little something for everyone, whether you are into what commercial trucks used to be or the agricultural side of things, with an array of different tractors.  The scenery is very nice, and the museum has great backgrounds for photography.

The trucks and tractors began coming in on Thursday, February 17, and when I was able to attend on Friday, February 18, there was plenty to walk around and see.  The weather was really nice on that Friday with the sun out and a good breeze to help keep everyone comfortable.

Something starting to gain traction at this show is a convoy that goes from the show to 75 Chrome Shop in Wildwood.  This year about 14 trucks participated on Friday afternoon, and I was able to film them, as well as capture some images of the group.  JoJo Dzilinski, president of the Vintage Trucks of Florida Chapter (Chapter of the Antique Truck Club of America), also participated in this convoy and mentioned it was a fun ride and a great turnout.  He said, “This convoy is an opportunity to not only show the trucks, but use them and play with them, as well.”

Saturday started out really dreary, but by the afternoon, the sun came out and I was able to get some more photos and video footage.  A highlight for me on Saturday was being able to see Steve Melton, a multi-generational farmer and rancher in Florida.  He is known throughout the state for preserving antique tractors and Florida traditions.  Being involved in the trucking industry, it isn’t common to witness someone new to the industry and enjoy the curiosities they have for the trucks they see.  Steve doesn’t know a lot about class A trucks, but he was definitely interested in them at this show and had conversations going to learn more about them.  I was able to film Steve, which also gave me a lot more insight on his curiosities and learn more about him, as well.  It was cool.

Last year’s truck count cleared the goal of 100 trucks, but this year there were just under 100 in attendance.  JoJo said the fire trucks that normally attend were not able to, which was the first time in a long time, due to the fact the firemen had a winter convention that they were already committed to be at.  There was also a slight decline in spectators without the yearly truck and tractor pulls.  This is always a highlight for the show which many enjoy.  Unfortunately, the pull sleds were not able to be secured for the show.  For those who may not know, the sleds are what the trucks and tractors hook to with the sliding weights which shift as the trucks or tractors pull the sled down the track.  With this all being said, this show had a very friendly atmosphere and a homey feeling.  Not only were trucks brought from out of state, but attendees from out of state came to the show, as well.  All who were there had a deep appreciation and respect for all the trucks that were parked.

This year, the Vintage Trucks of Florida voted on a charity to integrate into their truck show and the Tunnels to Towers Foundation was the chosen charity.  This is a non-profit organization based out of Staten Island, NY that provide aid to injured or fallen military and first responders.  The basis for their beginning started with the events and tragic deaths that occurred on that fateful day back on September 11, 2001.

There was also a 50/50 drawing on both Friday and Saturday.  The winner of Friday’s drawing donated the proceeds back, so it rolled over into the Saturday drawing.  Saturday’s winner followed suit so that all of the money from the 50/50 raffle went straight to Tunnels to Towers.

Special thanks from JoJo to Keith Jones and his crew from the Keystone Antique Truck and Tractor Museum in Colonial Heights, VA, Doug Maney, curator of the Mack Museum in Allentown, PA, and Ryan Wichtner for the participation and support.  And big thanks to everyone, near and far, who participated and attended this show, not only from the United States, but from different countries, too.

This year was a nice show, with the ability of visiting with those that attend this event every year, including JoJo and Lou DeBerardinis Jr., as well as the cool new addition of the Keystone Antique Truck and Tractor Museum, which brought down multiple trucks to display in the show.

Stay tuned to the Vintage Trucks of Florida Facebook page for the future announcement of the dates for their 2023 show.  If you are in Florida when the show is going on, make sure to stop in and check out all the vintage variety that is there to see, and know that it will not disappoint.