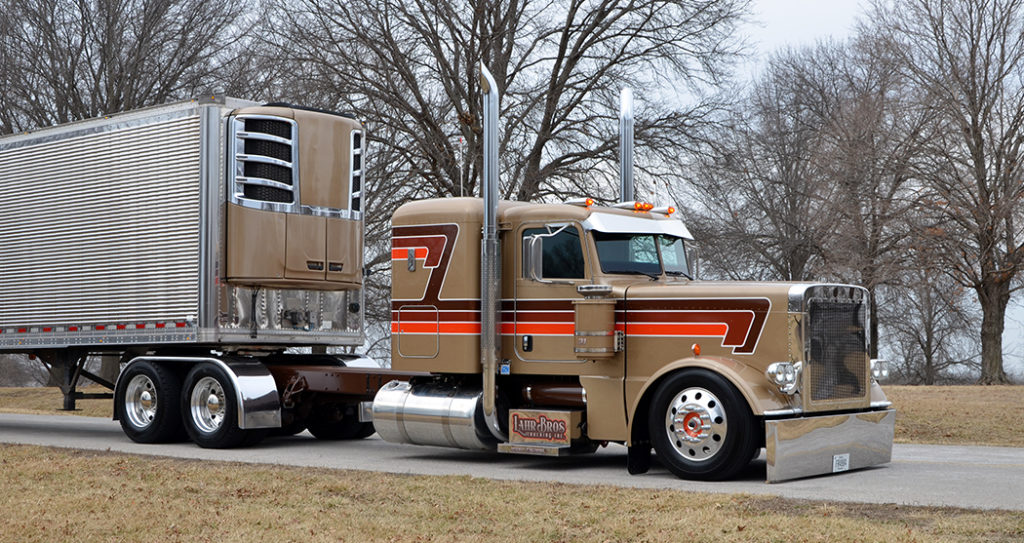 This month’s creation was ordered for Pat Lahr (30) of Lahr Bros. Trucking in Denison, IA.  The other Lahr brothers include Charlie (32), who works with Pat, and an older brother named Kelly, who is a big crane operator.  Their dad, Rick Lahr, who passed away from cancer in 2016, helped the boys get started when no one else would, and for that, they are forever grateful.  So, this truck was put together in honor of the values he taught them.

When Pat was in 5th grade, his parents split, and mom (Patty Lahr) moved to Okoboji, IA.  Being kids, they went with their mom.  This is where Pat and his siblings went to school, but after graduation, Pat and Charlie moved to Denison to be near their dad – and they still live there today.  Charlie went to trade school for a year, where he learned how to build hot rods.  In Denison, they both started working for a family friend’s farm, Topf Farms.  These folks helped both Pat and Charlie get their CDLs.

After Charlie showed Pat a picture of one of Vinnie Diorio’s cool Peterbilts, Pat was like, “Wow!  They can do that to trucks, and we could drive one?  Man, I am in!”  Pat has always been the type of guy that would prefer to just buy a truck he likes, even if it is not cheap, then work his butt off to pay for it.  So, the two boys set their sights on finding a cool 379 Peterbilt with an extended hood and a flattop sleeper (their definition of cool).  During their search, they ran across a man who had the Peterbilt they wanted, even though it needed a little work.  At the time, Pat was 20 and Charlie was 21.  The man told them, “If you can walk away without looking back, you don’t need to buy this truck.  But, if you find yourself looking back, you need it.”

The boys put a business plan together and then presented it to all the local banks but with no luck – they were just too young.  Finally, after the boys had exhausted about every option they had, their dad told them that he would refinance his house for a “basement remodel” and help them get their first truck.

Their dad, Rick Lahr, ran the Farmland Foods plant in Denison for 42 years.  The boys convinced him to finally retire, but he just couldn’t lay around, so he went to work for Topf Farms (the same place the boys used to work).  Less than a year later he was diagnosed with cancer.  At this time, the boys sold their beloved truck and took a break to help take care of their dad.  Rick Lahr passed away in June of 2016, just ten short months after his cancer diagnosis.

After their dad passed, the boys went back to trucking, and haven’t looked back.  Over the years, they have had some cool rides, and Charlie currently runs a maroon 2006 Kenworth W900L Aerocab.  They also own a sweet flat glass KW together.  Pat had a nice 1998 Peterbilt he drove until he got the new one seen here built.  The boys always wanted to order a new one from me, and when they called, I just happened to have an extra old dash slot available for them to take.  Bringing in an old Freightliner ad, Pat said he wanted this truck to look like the one in that brochure, so we broke out the paint chips and got it ordered.

This new truck is a 2022 Peterbilt 389 with a 48” flattop, sitting on a 294” wheelbase, and painted Vintage Golden Tan with an old school Brown frame.  Powered by a 605-hp X15 Cummins with an 18-speed, this is one of the good ones – with the old dash and all the goodies.  When it showed up, the boys had us hide the DEF tank and re-skin the passenger-side door to delete the peep hole, then took it home to do their magic.  I think they knocked it out of the park!

When Pat came to pick it up, he promised to bring the truck back for pictures after they got it done.  Once the truck got back to their shop, they built their own front air-ride suspension, hid the air-ride shocks on the back of the bunk, built deck plates, installed a Spare Time Fab 359 interior kit, and then had a local shop lay out the stripes in the colors they picked when they first came to see me in KC.

Married to his wife Kayla for five years now, the couple has two small children – a daughter named Finnley (3) and a son named Remi (only 9 months old).  Pat couldn’t say enough about how fortunate they were to have their dad help them get started.  “After letting us try to get it done on our own, he eventually stepped in to help.”  They know that they would not have been able to do it without his help and are super grateful.  Building a legacy is not easy, but the Lahr brothers, Pat and Charlie, had a great example to follow!