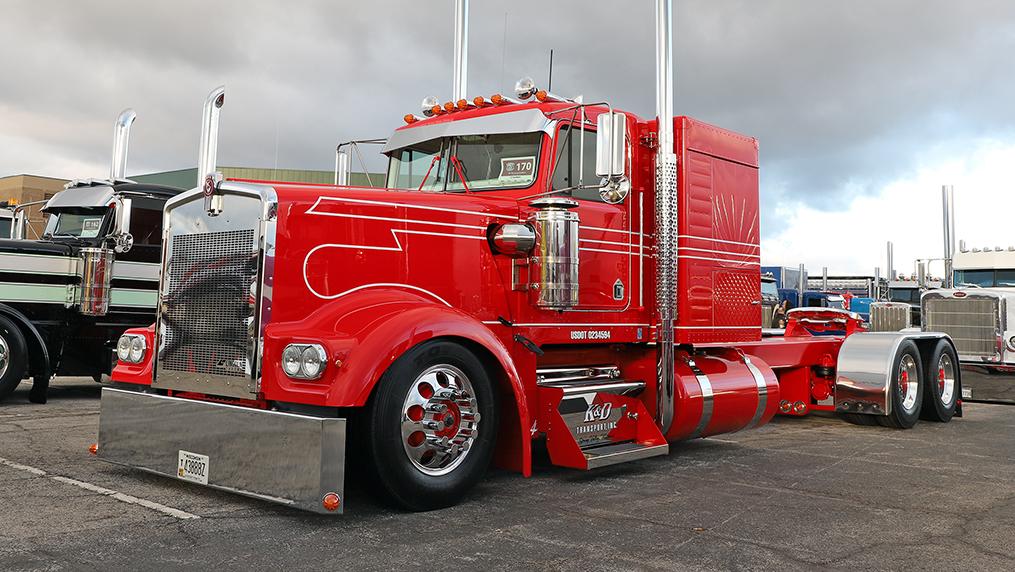 After a two-year hiatus due to Covid, the 50th anniversary of the Mid-America Trucking Show (MATS) finally happened – and it was worth the wait!  Held at the Kentucky Expo Center in Louisville, KY on March 24-26, 2022, this was the first show held since the 2019 event.  And, according to the numbers, it didn’t break any records, but that didn’t matter, because it was an awesome show.

With 58,000 attendees from all 50 states and 55 countries, 860 exhibitors, and one million square feet of space occupying the expo center, the place was packed.  The PKY Truck Beauty Championships, held outside in the parking lot, saw a record amount of amazing iron, as well.

Arriving on Tuesday, two days before the show started, getting to Louisville proved to be a challenge in itself.  The night before we were set to fly out, our flight was canceled.  After being told there were no available seats on any flights going to Louisville until Friday, we got online and started searching.  Little did we know, many of our friends from Valley Chrome and Roll On Customs were also scheduled to be on that canceled flight, so we weren’t the only ones scrambling to make alternate plans.

Thankfully, after a few hours of searching and making phone calls, we were able to find two available seats on a flight going out of Los Angeles the next morning, headed to Philadelphia of all places before turning back to Louisville, so we jumped in the car and drove five hours through the middle of the night to catch that flight in the morning.  What a fiasco!  But we made it to Louisville on Tuesday night, just a few hours later than our original plan.  Flying these days really is a crap shoot!

Wednesday was spent setting up our booth in the North Wing and visiting with many of our truck show friends we had not seen in a while.  It was nice to catch up with folks like Bryan Martin of 4 State Trucks, Nicky and JR at Lifetime Nut Covers, and Kent, Gary, and Ray over at Valley Chrome.  Our man John Testa was out and about doing live remotes from the show starting on Wednesday and continuing through the event.  Wednesday night we found ourselves out on the truck show lot until 10:00 PM taking pictures of the trucks as their lights were being judged.

The weather is typically an “issue” at MATS, but this year it was not that bad.  It rained pretty hard on Tuesday night and then sprinkled off and on a bit on Wednesday, but other than that, it was dry – and there was no snow!  There was, however, a lot of wind and cold temperatures throughout the entire event.  Some days, the temperature never got higher than the 40s, and if you figured in the wind chill factor, the “feels like” temperature was more like in the 30s.  The wind wracked havoc on banners and brag boards out on the truck show lot, especially on Wednesday and Thursday.

And speaking of the truck show lot and the PKY Truck Beauty Championships, this was the first year that Jason Alt was put in charge of running that part of the event.  After longtime show producer Bud Farquhar retired, Jason was called to take over, and he and his crew did a great job.  The old baseball stadium that sat right next to the truck show lot was finally tore down and gone, freeing up an almost unlimited amount of space for trucks.  Typically, they limit the trucks to about 100 due to the space issues, but without the stadium there, the sky was the limit.  This time, for the first time ever, almost 200 trucks were parked neatly on the lot and competing for trophies and bragging rights.

Typically, Thursday is a pretty slow day at MATS – but not this year.  Starting the day off with a VIP session, which is usually quiet, this year the crowds immediately came.  We were busy all day in our booth, handing out magazines and posters, and selling 10-4 swag.  As the day came to an end, we headed out to the lobby to check out a special reception that was offering $1.00 beers, food, a silent auction, and other special activities to help raise money for the St. Christopher Trucker Relief Fund.  The MATS show producers were also unveiling the “Wall of Fame” and announcing their choices.  Many of our friends were on that wall, including our co-founder Erik Sieben, who passed away in 2019 from cancer.  After the fun reception, we headed out back again to get more pictures of trucks during the official light show.

About a week before the show, we heard that none of the major truck manufacturers were going to be on display at MATS this year.  This was not good news, and some people even decided not to come because of that.  I don’t know why they chose not to support this event, but I have to say, it did not hold the show back.  In fact, it might have driven attendees to spend more time visiting us smaller vendors, instead of hanging out in those big fancy booths.  We were in the North Wing, which was packed wall-to-wall with vendors and attendees, as was the West Wing.  The South Wing, however, which is the largest hall, was only half full.  From a vendor’s point of view, those big OEMs were not missed!  We hope they come back, but if they don’t, the show will be fine without them.

By the end of the day on Friday, we were down to our last 10 t-shirts (and we brought a lot), and our stock of magazines was quickly dwindling, too.  But that did not slow us down.  Friday was crazy – the busiest Friday I have ever seen in 20 years of going to MATS.  My mind was spinning as to how crazy Saturday might be since that is typically the busiest day.  Wandering out to the front parking lot in the afternoon, the National Association of Show Trucks (NAST) was hosting their own truck show – the Louisville Invitational Shootout – featuring 15 sweet trucks that were invited to compete.  Congratulations to Kaleb Hammett (Working) and Josh Ihlenfeld (Non-Working) for winning their classes.

After the show ended on Friday evening, we headed out with 26 of our friends, contributors, cover truckers, and advertisers for a special 10-4 Magazine dinner.  We usually hosted this dinner each year at the nearby Texas Roadhouse, but due to Covid and worker shortages, they were not seating any parties larger than eight people!  Scrambling to find another location, we ended up at Mark’s Feed Store for some good BBQ.  These folks were awesome and very accommodating, giving us our very own room to stretch out and be comfortable.  Thanks to everyone who joined us.  It is always fun to get together and hang out with our truck show friends!

Saturday morning came quickly, and before we knew it, we were heading out to the awards ceremony, which began with tributes to a few people we have lost since the last MATS show, including our very own Erik “Big E” Sieben, Bob Brinker, Larry Diller, Paul Marcotte, and Kam Wilken (a young man in his 20s that recently died in his truck from a heart ailment).  The Wilken family was on hand to give out a special award in Kam’s honor, as was the Eilen family, who give out an award each year in honor of Jake Eilen.  As I sat there and listened to the winners be announced, I couldn’t believe how many of them were affiliated with 10-4 Magazine as either cover trucks, feature trucks, or friends.

After the awards, we headed outside to take pictures of the winners with their trophies.  Once we finished that, we headed back inside to our booth, where not much was happening.  Turns out, Saturday was not crazy busy.  In fact, it was the slowest day of the show.  By now it was late in the afternoon, so we started tearing everything down and packing our booth up for home.  A big thank you goes out to our March 2022 cover trucker Ron Beer for bringing our two pallets out to Louisville and bringing one back to California.  The show came to an end at 4:00 PM and by 5:00 PM we were packed and ready to go.

The final official event of the show was a truck and tractor pull on Saturday night, but we were all too exhausted to go to that.  Held inside Freedom Hall, the vehicles had to use special piping connecting their exhaust to a filtration system on the pulling sled to keep from filling the building with smoke.  We would like to thank Anna Galloway of A. Galloway Photography (she specializes in tractor pulls) for attending this event on our behalf and taking some pictures.  There were four classes.  The winners were: Unlimited Super Stock – Mike Chizek; Mini Rod Tractors – Bruce Slagh; Pro Stock Tractors – Danny Schmucker; and Pro Stock Semi/Hot Rod Semi – Chris Wood.

And just like that, MATS 2022 was over!  But this was one for the books, for sure.  It may not have broken records in a lot of categories, but it was the best MATS we have ever been to, and it had the most (and best) trucks we’ve ever seen in the PKY Truck Beauty Championships outside.  All in all, OEMs or not, our hats go off to the entire crew at MATS and PKY for a job well done.

Reaching a 50-year anniversary is a huge milestone, and we would like to congratulate Toby Young and the MATS staff for producing a stellar event that was certainly worth the wait!  The dates for 2023 are set for March 30 through April 1.  We hope to see you there.  The winners for the 2022 show were:

Check Engine Lights & More!
A Reflection Of You
6.4L HEMI V8 in a Dodge Durango | Truck Central
The Great White North
Be Confident In Yourself