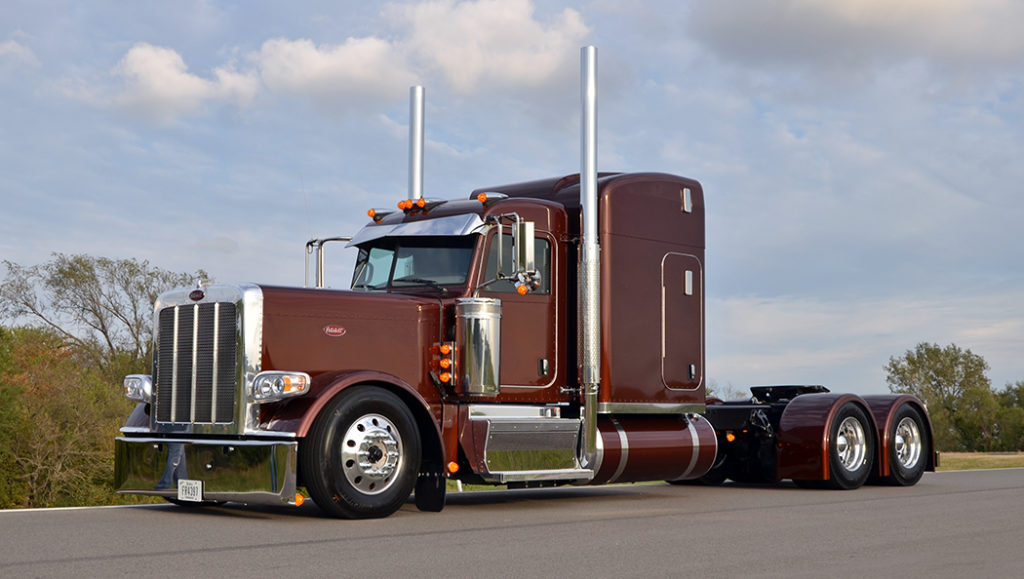 This month’s creation was built for Jason Goettsch of Goettsch Trucking out of Durant, IA.  Jason, along with his wife of 14 years, Tara, both drive for the company.  Along with trucking hard, Jason enjoys family vacations with their two daughters – Brynn (13) and Blakely (10) – and has a passion for snowmobiling.  Both of these activities come at a cost, which is what keeps Jason “stay’n after it” day in and day out.

Neither of Jason’s parents were involved in trucking.  At one point they had a farm and a few smaller trucks, but they quit doing that when Jason was six years old.  After Jason graduated high school, he started working for his uncle and an apprentice, learning heating and cooling, and did that for just over two years.

While doing the HVAC work, Jason was also moonlighting for a local farmer.  One day the farmer asked him if he could take a load of corn to the elevator.  Jason explained that he didn’t have a license, but the farmer said, “That don’t matter, you’re a farmer now.”  Heading out to the shop to get the truck, there sat a GMC Astro COE.  When they fired it up, within moments the shop was filled with smoke.  After airing the place out, Jason was able to finally get in it.  And as they say, from that moment on, everything changed.

Driving that old Detroit-powered GMC, which made lots of weird sounds and smoked, scared the heck out of Jason, but he loved every minute of it.  When he told his parents, they were not on board.  Then Jason reminded his mom that she always said, “Do what makes you happy,” and this made him happy.  He wound up quitting the HVAC job and went driving full time for Murphy Bros. Pipeline.  Over the next two years he saw all 48 states and all the Canadian providences.  Quite the accomplishment by age 24.

In 2001 Jason ordered a new W900 from a local dealer.  He pulled a flatbed for three years, then sold the KW and bought a 2001 Peterbilt, changing out the 63” sleeper to a 48” model, then drove it until 2006.  Unfortunately, that truck caught fire one day and burned to the ground.  In 2007 he purchased a purple and white 1995 Peterbilt with a 36” sleeper from our friends at C & J Trucking in Iowa.  He drove that Pete until the crank broke, then bought a 2010 Pete 389, which is the truck his wife drives daily now.

When it came time to purchase a new ride for Jason, we had some mutual friends, so he called me.  We hit it off, and rest of the story is the truck you see here.  When the truck showed up, along with a bunch of others, we were short-handed at the dealership, which caused a few delays.  We appreciate Jason and Tara for their business, friendship, and patience!  They are some of the nicest people you will ever meet.  And in the end, the truck turned out cool, and is now earning its keep.

The truck is a 2022 Peterbilt 389 with a 63” HR sleeper, a long wheelbase, a 605-hp X15 hooked to an 18-speed, sitting on low air, but not too low, as they still have to work.  Ordered with a factory split tank for fuel and hydraulic oil, the truck also has a pin-type 5th wheel, extra fuel heaters, and all the goodies.  The crew at KC Pete hid the DEF tank and installed one of my body drop kits, along with a visor, bumper, cab and breather lights, dummy pipes, custom cowl panels, Shift fenders, strapless breathers, a shox box, and a smooth deck plate.  An over-inflate system was also added for those tight spots.

Wanting to give props to his wife, Jason told me how supportive Tara always has been – from the beginning, she has been an important part of everything they do.  Back in the day, she was a dental assistant, and then she quit that job to stay home and raise the kids.  Later, they put her in one of their trucks to run local, which was a good fit for her schedule after the kids began going to school.  Being a retired machinist, Tara’s dad Dick helps out quite a bit around the shop, too.  Family and fun keep things in perspective and ensure that Jason is always “stay’n after it” to keep the wheels turning.

Good food and exercise key to HGV driver health
Truck & Tractorpulling ‘De Knipe’ 2011 HD
MAN and ABB announce electromobility plans for the long-haul
Surprise, It Snowed a Ton – So Does the Suburban or The Excursion or The Escalade Get Stuck First?
Refrigerated equipment supplier to Volta announced