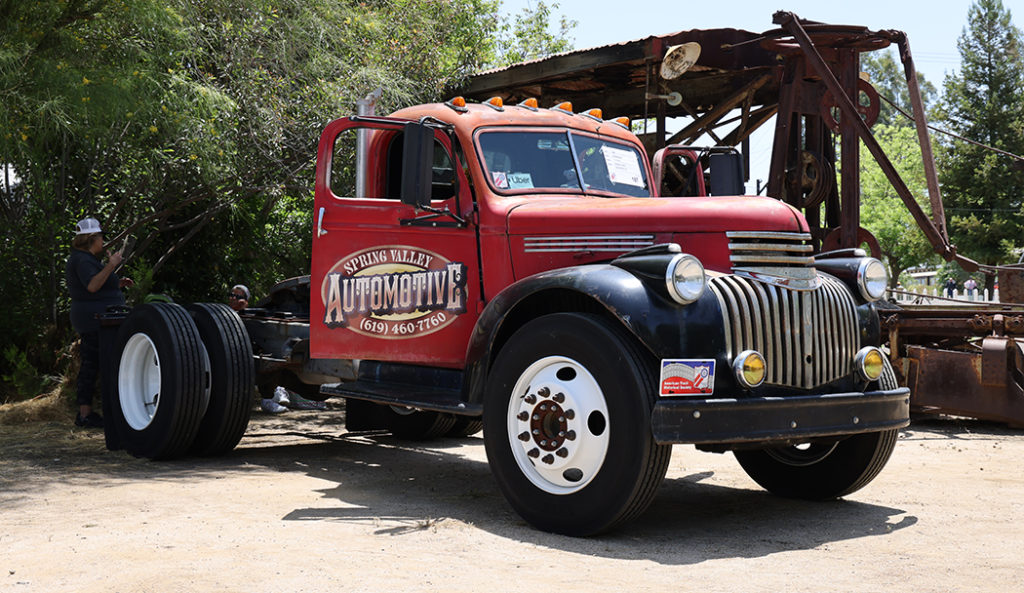 With perfect southern California spring weather, the SoCal chapter of the American Truck Historical Society (ATHS) hosted their 37th annual truck show and swap meet on Saturday, May 7, 2022.  Held once again at the Southern California Railway Museum (formerly known as the Orange Empire Railway Museum) in Perris, CA, the fun event featured 150 trucks which included older big rigs, classic pickups, trains, military vehicles, fire apparatus and more.  And despite the fact that the show was held on Mother’s Day weekend, many people still came out to join the festivities.

With trucks rolling in from as far as Sacramento, Phoenix and Yuma, the field featured a diverse mix of vehicles dating back as far as 1915 (Carl Pickus brought out the “oldest truck” which was a 1915 GMC).  Sitting atop the bed of a 1919 Moreland during the event were the unique trophies that were handmade for the show and featured various truck parts.  The Moreland is owned by the late Jim Wantland and was brought in by the next generation of Wantland boys – his two grandsons – who are both current members of the SoCal chapter.  Walking around the grounds and taking pictures, we (my wife and I) had a nice time catching up with our friends Vic Caliva, Nick Bruno, Jerry Salinas, Mark Tarascou, Joe Arias, and others.

Mike Green brought in a vintage hay truck with a matching loader from Yuma, along with several other trucks, and the Klenske family brought in a bunch of head-turning green classics from Dalton Trucking.  Joe Adivari had a sweet ‘62 Peterbilt hooked to his trailer (which is setup as a bar/lounge inside), Nick Bruno brought his famous maroon with white stripes 1951 GMC Series 900 on display (which was featured on the cover of our 4th issue from November 1993) and a couple other cool old rides, and Dennis Chan had a 1980 Peterbilt 352 pulling a 1971 Great Dane trailer he brought all the way from Sacramento.

In addition to all the beautiful old big rigs in attendance, there were also a bunch a vintage pickups and specialty vehicles including rat rods, fire trucks, classic wreckers, custom builds, a couple buses, and military vehicles, such as a 1943 Ford GTSB Bomb Service Truck, complete with a bomb hanging on the back (we are assuming it was a real bomb but hoping not a “loaded” bomb).  Michael McQueen brought out his bright orange Diamond T pickups all the way from Phoenix, AZ (one of which earned the Best of Show Light Duty award), and Jimmy Boschma brought out a white and blue 1953 Kenworth Bullnose COE hay truck that was owned by his grandfather, the late Charlie Tadema, and won the Best of Show Big Rig trophy.

Over in the swap meet area, along with a variety of parts for old trucks and accessories for sale, the Western Antique Power Associates (WAPA) had several vintage stationary engines, tractors, and pieces of antique machinery on display for all to enjoy.  Members of the San Diego chapter were also in attendance at the show, along with plenty of old truck nuts and enthusiasts of all ages.  With a few food vendors on-site and several helpful members from the hosting SoCal chapter offering assistance, answering questions, and selling the official show shirts, it was a fantastic and relaxing Saturday afternoon for all involved.

Special thanks to Chris Caballero of the SoCal chapter for all his help, not only getting us into the event and parked in a nice spot in the shade, but also for helping me with the information for this article and the winner’s list.  This event is typically held each year on the first Saturday in May, so that would put the 2023 show on May 6th.  For more details about this casual and fun event, or the SoCal chapter of the ATHS in general, visit their website at www.socalaths.com today.  Thanks to everyone involved in this relaxed event.  We look forward to spending another “perfect day” in Perris, CA next year with all our SoCal friends and their sweet older rides.