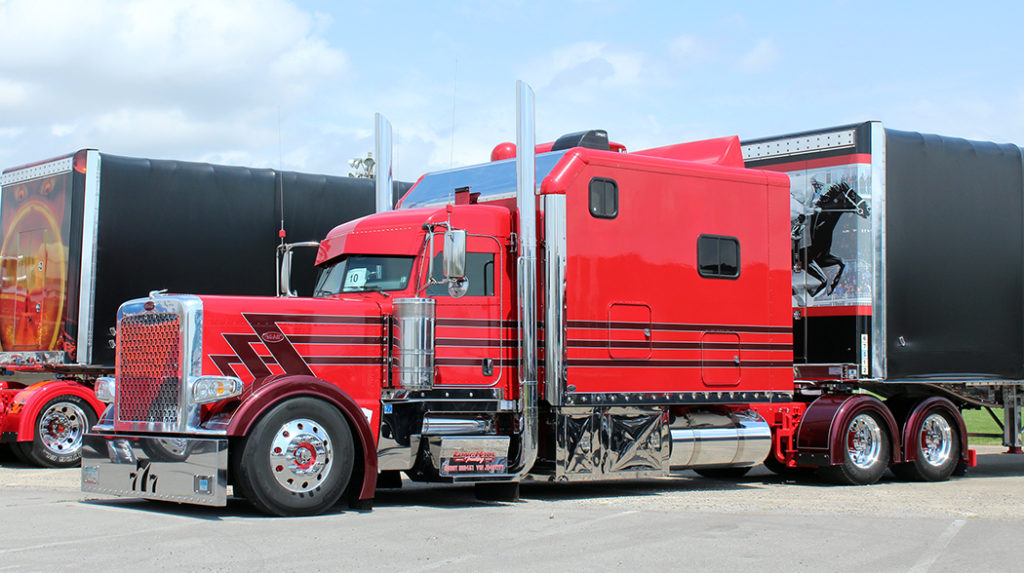 The second annual Swamp East Missouri Truck Show and Convoy was held on April 22-23, 2022, at Sikeston Sports Complex in Sikeston, Missouri.  Hosted by T.W. and Kerrah McDermott, the weather was perfect for what was our area’s first show of the season.  With plenty of sunshine, clear blue skies, a slight breeze, and temperatures in the upper 70s, it was an epic start to the 2022 show season in the Midwest.  And with trucks spread throughout the complex, parked in the parking lots and on the grass, it was a beautiful and relaxed setting to sit in the shade and catch up with some of our truck show friends.

This charity event brought out some “famous” truck show folks like Arlyn and Linda Workman, Mr. Rooster Davis (and his chauffeur, his dad, Brandon) with The Wee Pete, Dean and Theresa DeSantis, Gary Jones,  David and Dill McKinney, Randy Victory, and even the RoadWorks truck and crew (Troy Huddleston), along with so many other amazing folks.  On Friday night, a convoy, held just for fun, led by the show’s host T.W. McDermott, who was followed by Dill McKinney, started at Sikeston Sports Complex and traveled to Charleston, Missouri, and then back to the sports complex.

With a nice variety of cabovers and conventionals, there was plenty to see, including older classic rigs, newer trucks, antiques, show trucks, and also just everyday work trucks.  Matt Neblock was showing off his new teal-colored KW, Randy Victory brought his latest build (a blue and chrome Peterbilt 359), and Gary Jones had his super-stretched white and red Peterbilt cabover.  Power couple Dean and Theresa DeSantis both brought out there amazing red combos, and there was also a sharp blue A-model Kenworth that had a beautifully painted and pinstriped motor to match.  For such a small show with a local vibe, the trucks in attendance really were top shelf!

The Swamp East Truck Show and Convoy benefits The Kenny Rogers Children’s Center (KRCC).  The KRCC is a local center that provides superior therapy services to children throughout Southeast Missouri at no charge to the families served.  They currently serve more than 350 children with special needs from birth through 21 years of age.  The center is special to The McDermotts, as they have a nephew and friends who have attended the facility.  Last year, the show was able to raise $1,500 for KRCC, and this year the show, which brought in 67 trucks, was able to more than double the amount and donate $4,000.

To start the awards presentation, T.W. McDermott got up there and said, “This is something I get up and love to do every day.  There’s a parking lot full of brilliant minds here.  Tire mechanics, insurance agents, drivers, everything that we do all ties together.  Thank you to everyone that makes this world better for what we do.  I’m glad I get to be a part of this.  We get to do a lot of cool stuff with a lot of cool people, and 90% of you are standing in this crowd.  We’re not out here worried about who’s stuff is better, we’re just trying to bring back the fun and family to truck shows and show how the truck show world is just one big family – no turf wars here.”

To end the show on Saturday night, the awards were handed out by T.W., Eric Hill of 10-4, and Dill McKinney.  Plaques were given out to the “Top 10” trucks, and this included Matt Neblock, Mike Britton, Jon Tweedy, Allen Pele, Randy Victory, Tarik Al-Amin, Brandon Henderson, John Herdrich, Ben Easter, and Nolan Henderson.  Next year’s show is set for April 14-15, 2023.  We hope to see you there, so you can enjoy this fun and relaxed but epic start to the truck season in the Midwest next year!

EDITOR’S NOTE: Thanks to our very own Eric Hill for providing some of the photographs for this show report!