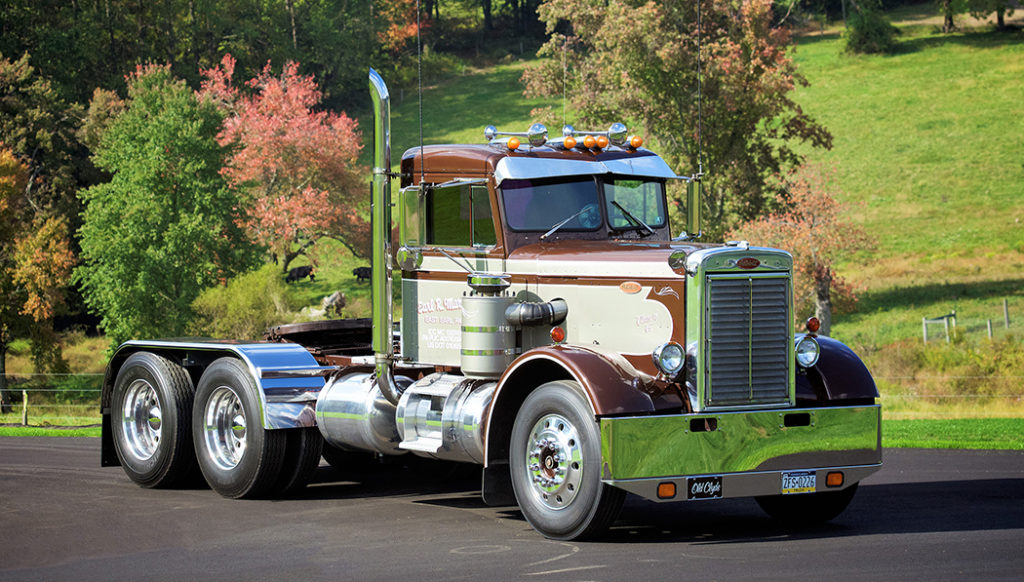 In 1964 Earl R. Martin Sr., a young trucker from East Earl, PA, walked into his local Mack dealership in Lancaster, PA, and inquired with a salesman about spec’ing out a new Mack truck.  Well, the salesman laughed at him, responding with, “Get out of here kid.  Come back to see me when you grow up and get serious.”  Needless to say, Mack has regretted that decision ever since.  So, with money to spend, Martin, who was 27 years old at the time, began searching for a Peterbilt truck to purchase.

Since that fateful day at the Mack dealership, the pride of the Pennsylvania based Earl R. Martin Trucking fleet doesn’t carry a Bulldog, but rather a red oval on its grille.  And the 1965 Peterbilt model 351A, affectionately known as “Old Clyde” by everyone, has been a member of the Martin Family since the day Earl Sr. and his wife Ruth flew to California to pick up the truck at the former Peterbilt plant in Oakland, CA.  Both Earl and his brother Landis bought identical Peterbilts, and the consecutive serial numbered Pete was piggybacked on the rear of “Old Clyde” for the long trip home to Pennsylvania.

As many will tell you, a Peterbilt in Mack country was a rare sight in the 1960s, and even trucking writer and photographer Duncan Putman, whose grandparents and mother were from nearby New Holland, told this author that he remembers seeing the Martin Peterbilts in the early 70s.  “It was not a very common sight to see a truck like that working in that area,” referring to Lancaster County, Pennsylvania.  But while Duncan was just a guy who loved trucks at the time, Earl Jr. told us that many people in the area were skeptical of his dad and uncle purchasing these Peterbilts, with many saying, “Those Martin boys will never be able to pay those two fancy trucks off!”

Proving the local naysayers wrong, Earl Martin Sr. put the truck to work right away, initially pulling a dump trailer hauling stone and sand, but branched out and began hauling hogs, pulling a flatbed hauling steel, and even running many trips with the Peterbilt hauling potatoes from Florida to Maine, all while sleeping across the seats of the small Peterbilt cab, since the truck was not equipped with a sleeper.  As the Earl Martin Trucking fleet grew in later years, “Old Clyde” was kept for local work and for pulling a tanker hauling fuel or as a spare truck during the 1980s.

While Earl Sr. was the owner, and obviously first driver of the Peterbilt, Earl Jr. told me many of their company drivers put a lot of miles on the truck over the years, too.  But because of one of their drivers, this is how the Pete earned its nickname “Old Clyde” as Earl Jr. explained.  “One of our early drivers (who just retired a few years ago) had a cantankerous father-in-law whose name was Clyde.  Our driver thought that since the old Pete could be a bit cantankerous at times, as well, he began calling it Clyde, and the name just stuck.”

While speaking with Earl Martin Jr., he told me a lot of great stories about his dad and the Peterbilt.  “My dad claims he took me for my first ride around the block in the truck when I was only 6 or 8 weeks old!”  As Jr. continued, he added, “I spent a lot of my childhood riding along with dad in the old Peterbilt, sometimes even during the school year on short trips before or after school.”

But as the stories continued, he mentioned that the 351A was wrecked in the late 1980s by his cousin.  “He was delivering a load with one of our dump trailers and wound up laying the truck over while making the delivery.”  The Peterbilt was banged up pretty badly and Earl Martin Sr. was told by his insurance company the truck was totaled.

For quite some time after “Old Clyde” was wrecked, it sat under a tarp in the corner of the yard.  Earl Jr. said, “My dad was planning to sell the truck for scrap, but I begged and pleaded with him not to.  I told him how I wanted to drive the same truck he did when I got my license.”  So, after Jr. convinced his dad, the elder Martin decided that the old Pete would be worth repairing, even if it didn’t make sense financially to do so.

Now, 57 years later, “Old Clyde” has over 2,000,000 miles on its odometer and went through a complete restoration in 1995.  The vintage 1965 Peterbilt 351A is powered by a turbocharged Cummins NH-250 with over 300-hp, mated to a 15-speed transmission, pushing power to 3.90 rears, riding on a 209” wheelbase, with aluminum rims wrapped in 24.5 low-pro rubber.  While all the restoration work was done at the Earl R. Martin shop, Jr. had Mark Hollen at Denver Truck Painting in Denver, PA, give “Old Clyde” its classic Peterbilt paint scheme.  The interior of the truck also received an update including carpet, leather seats, and lots of other custom goodies.

While Earl Jr. did run “Old Clyde” for a few years after its restoration, the truck is now retired from revenue service and is primarily used to represent their company at truck shows and other events.  However, the younger Earl’s sons, Taylor and Tanner Martin, have taken an interest in the family’s classic Peterbilt and enjoy driving it, having done so in parades around the Lancaster County area, as well as going to truck shows with their dad.

As “Old Clyde” was Earl R. Martin Trucking’s first truck, the company has since purchased over 90 trucks since 1965, with nearly all of them being Peterbilts.  Jr. still likes to get out and drive from time to time, and when he does so, his personal ride of choice is an extended-hood Peterbilt model 359 that the company purchased new in 1987.  While Jr. now runs the family business, Earl Sr. is retired and no longer drives trucks.  He recently turned 85 years old this past May, but still enjoys being around the company he founded, coming in almost every day, and helping the shop by running parts and helping out with other miscellaneous small jobs.

Today, Earl R. Martin, Inc. (ERM) provides transportation solutions for their customers across North America.  Operating a modest fleet of meticulously maintained tractor-trailers along with a brokerage firm, a state-of-the-art repair facility specializing in full-service truck repair, rebuilds, custom fabrication, and restorations, the company also offers local and long-distance towing and wrecker services.  ERM has come a long way from its humble beginnings in 1965 as a one-truck operation.  And these days, although they prefer to run Peterbilts for obvious reasons stated before, they will gladly work on your Mack truck in their repair shop, as well!