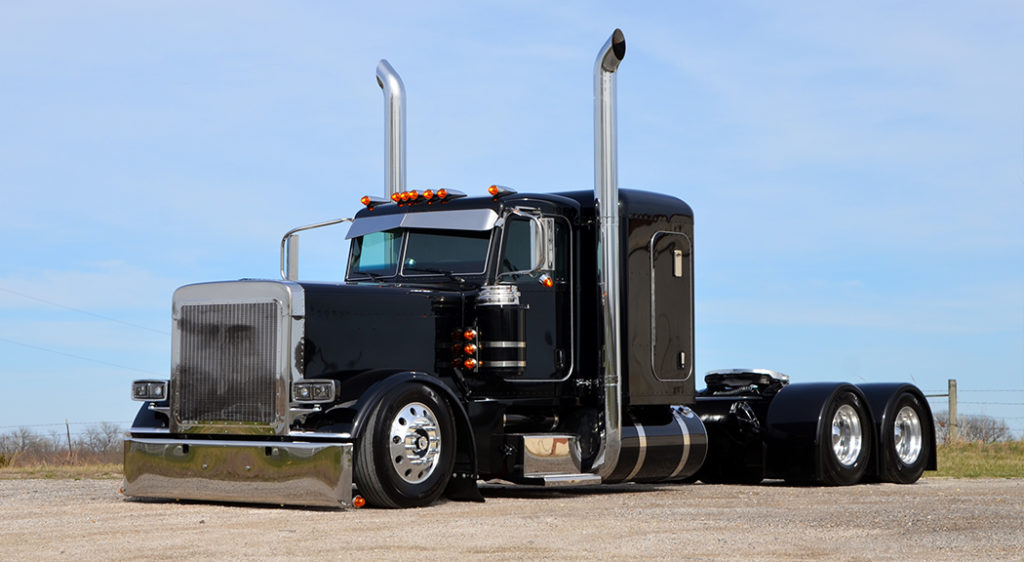 This month’s creation was built, once again, for Wade and Kayla Holtman of East Grand Forks, MN.  Back in May 2018, we built these folks a nice orange Peterbilt, and we titled the story “Good To Go!”  Well, now, four years later, this black beauty is their latest ride, and it is “Good To Go, Too!”  As an old Peterbilt ad once said, “Class… More Than Meets The Eye” – and this truck certainly fits that bill, even though it looks like just another black truck.

The last truck we built for Wade and Kayla worked out well, but when he started running into Manitoba, Canada, he was forced to shorten the truck’s wheelbase, so when it came time to order this new one, he picked a “legal” length.  The truck he had before the orange one was black, so when he decided to order this last new one before they quit making them, he said he had to go back to black.  Over the last few years, Wade has been building a “dream list” for this last one and spent some late nights thinking up ideas for this build.  He said, “There is a lot of time to think, especially at night, when some are sleeping.”  We all know how that goes.

As mentioned in the previous article, Wade and Kayla have two children – Billy (15) and Maveryk (10).  Kayla was a hairdresser at local a shop, but she recently purchased her own salon in their town called “Salon East” in East Grand Forks, MN.  Between the new business venture and kids playing sports, including hockey, golf, and football, things are pretty busy at home.  But that doesn’t stop Wade from trucking hard!

The new truck is a 2022 Peterbilt 389 with a 48” flattop, a “legal” but respectable length, an X15 Cummins hooked to an 18-speed, and loaded up with all the good stuff.  It is also one of the last ones built with the old gauges.  Since Wade kept in touch with us after purchasing the orange truck, the build went easy – not fast, but easy.  KC Peterbilt did all the paint work, but Tyler at NRC (No Rush Customs) did just about everything else.  Tyler told Wade, “You better not be in a hurry,” and Wade answered, “It doesn’t matter when I get it, my orange truck is doing just fine.”  What a great attitude!

This one, I have to say, turned out so sweet.  All blacked out and built with a 359 vibe, the truck is now fitted with a 359 dash, one of my body drop kits, a Spare Time Fab 359-style interior, Shift fenders, a painted floor, NT Lights (baby blue) for the gauges inside, a stainless grill crown from 12 Ga. Customs, and countless other small changes from Wade’s “dream list” of things he wanted to do.  He decided this was going to be a “keeper” truck, so he went all out.  We appreciate his patience and friendship.  This build wasn’t fast, but now it is “Good To Go, Too!” and already out there working.

One last note: my kids had been telling me I should do a TikTok video, so this was the first truck I did one on – I actually did two!  My kids thought they were cool, so I feel like it was a success!  You can check them out by searching #koolpetes or clicking here and here!!