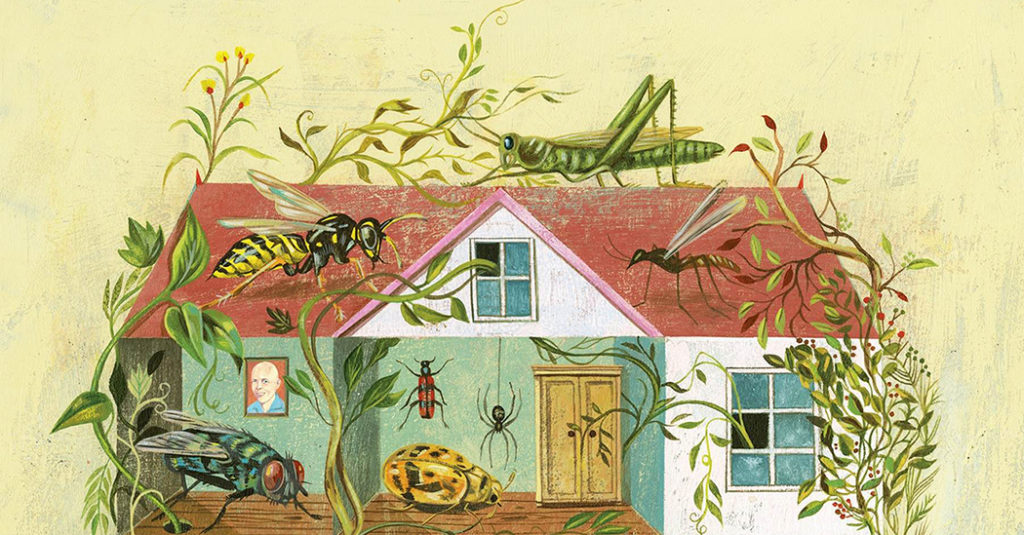 Ahhhhh, a quiet night at home.  You’ve been promising yourselves that for a long time.  A nice dinner, maybe a movie, or soft music and conversation.  It’s gonna be perfect – just you, your beloved and, as in the new book “Never Home Alone” by Rob Dunn, a few billion bacteria, a hundred insects, a parasite or two, and maybe a fungi.  Back when you were a child, chances are that you spent a lot of time outdoors getting dirty, sweaty, and germy.  Today’s kids, says Dunn, spend an average of 93% of their week inside, in what’s often a place that’s as germ-free as possible.  Dunn and his colleagues learned, however, that our homes are actually teeming with life we rarely notice, critters we can’t see, and creatures we share without even trying.  We live amidst abundant biodiversity, and it’s “beneficial to us, necessary even.”  Bacteria, for example, get an overall bad rap.  Of all the millions of bacteria known, “Just fifty” or so are dangerous to humans, and we absolutely need the rest to exist.  Without the bacteria in your gut, you’d be in a world of hurt.  Without it in your food, some dishes wouldn’t taste as good.  Says Dunn, we need bacteria so much that the kindest thing you could ever do to your kids is to let them get filthy dirty, or to take a page from the Amish and buy them a cow.  Bacteria are everywhere, including space stations, shower heads, and that glass of water you just drank.  Your house is loaded with fungi that are slowly eating it – so many kinds of fungi that some aren’t even named yet.  The average home holds “at least a hundred species of arthropods,” and cockroaches don’t make you nearly as sick as will the people you come in contact with.  So, it’s unsettling to think of those germs in your home, your food, and your bed, isn’t it?  Argh, what can you do to eliminate the creepy-crawlies that are in, on and around you?  “The answer,” says Dunn, “is that you shouldn’t.”  If you could somehow infuse the curiosity of a six-year-old with PhD-level intelligence, imagine what wondrous things you could learn.  Or why not make it easier on yourself and just read “Never Home Alone.”  Yes, that delightful, open-minded gee-whiz is exactly what makes this book so enjoyable.  Surprisingly, it’s doubly so for a germophobe, an arachnophobe, or anyone who can’t stand the idea of “intruders” in their home.  Author Rob Dunn has a way of brushing fears aside so he can tell you about something that’s too cool to miss, or a fact that makes you say, “Wow!”  You’ll kind of forget that fear for a moment, you’ll be almost impressed, and more likely to relax more and clean less.  Science-minded readers will love this book, too, as it’s filled with things you’ll want to know just for the health aspect of it.  Really, for anyone who’s alive, “Never Home Alone: From Microbes to Millipedes, Camel Crickets, and Honeybees, the Natural History of Where We Live” is a book to share with a few million of your newest best friends.