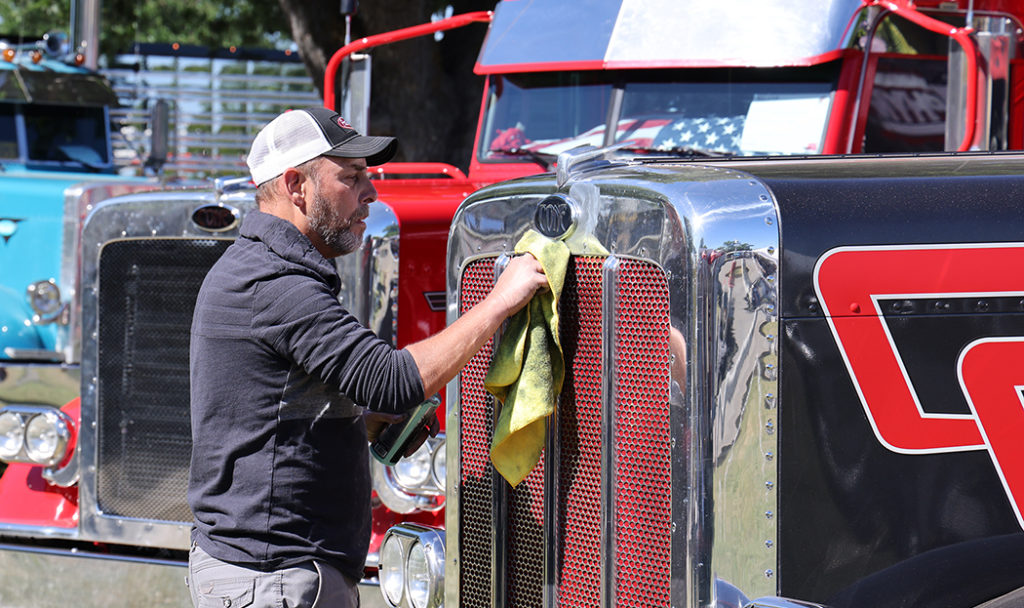 Trucking is a brotherhood.  When one falls, others will help pick them up.  Such is the case for Rene LaChance, a well-known trucker from California who had an accident several years ago and broke his back, leaving him paralyzed and permanently in a wheelchair.  As you can imagine, his ongoing medical expenses are huge.  Wanting to help his friend, a young trucker named Erik Vaillette organized a benefit truck show in Rene’s honor last year (2021) and it was a big success.  This year, the 2nd Annual Frenchy’s Truck Jamboree again raised much-needed funds for Rene.

Held once again at the Tehama County Fairgrounds in Red Bluff, CA on May 20-22, 2022, this year’s event was held earlier than the previous show.  Last year, the show was held in August, and it was not only extremely hot, but also very smoky, thanks to some nearby wildfires.  Looking to find cooler temps and cleaner air, the show was moved to late May this year, which really helped.  With clear skies and temperatures in the 80s, it was very warm but not too hot – and there was no smoke!

Although the temperatures were lower than last year, there was a lot of wind.  So much, in fact, we at 10-4 were unable to put our centerfolds and posters out on our tables to give them away to show attendees, which kind of sucked.  We did, however, bring out the famous Truckin’ For Kids show trailer, which we now own, and set up two booths in front of it – one for 10-4 Magazine and one to promote the upcoming TFK truck show, being held this year in Irwindale, CA on September 11.  A big thank you goes out to Roger and Annette from Maggini Trucking for pulling the trailer up to the show in Red Bluff with their amazing “Godfather” narrow-nose Peterbilt.

Arriving on Friday afternoon, we set up our booths, as did most of the vendors around us.  Some of the other vendors included Stay Loaded Apparel, One-of-a-Kind Customs, Zephyr Polish, America Matters, Borrachos Apparel, EZ Pete Interiors, PDI, Botelho Custom Trucks, Renegade, Trucker’s Choice Products, Orozco Polishing, and more.  Friday night featured a light show, but not all of the trucks were there yet, so Saturday was the “real” light show.  Parking the trucks a little different from the previous year, show producer Erik Vaillette and his crew parked trucks more centrally and then worked their way out from there – but they did try to keep like trucks together, when possible.

The truck show officially opened on Saturday morning and began with a short ceremony that included the playing of the National Anthem and a prayer.  It was a nice way to get the day going.  Walking around and taking pictures, there were about 150 trucks on display, which was a bit down from the previous year.  Some of the more notable trucks included a bunch from North Coast Wine and Kevin Scarpete, Double E had a few of their beauties there, Cone Trucking had their “his and her” Peterbilts parked side-by-side, and Phil Miller had an entire area filled with various cattle trucks.

Just across the row from Phil’s group, Jon Arreche had several of his black and gray rigs lined up, and just down the row was a small group of trucks that came together from back east, which included Mitchell Bottomley’s black and green show truck, Jacob Bonaham’s light blue Peterbilt, and Bryan Lee’s “Purple Storm” Peterbilt.  Other popular rigs were Erik Vaillette’s brand-new maroon and dark gray 2022 Kenworth W900L making its debut, parked alongside Gary Jones and his white and red Peterbilt cabover.  With plenty of old and new trucks, bobtails and combos, and both working and show trucks, it was a good mix.

As always, when “Big Ed” Davis rolls into a show with his loud 12V-71 Detroit-powered turquoise 1979 Kenworth W900A, everyone stops and takes notice, because this past 10-4 Magazine cover truck is phenomenal, and just about as perfect as perfect can be.  Ed did not miss a thing – the engine, interior, lights, and exterior are all dialed in and, quite frankly, hard to beat.  Which is probably why his truck was awarded with the Best of Show Non-Working trophy on Sunday morning.  Another past 10-4 Magazine cover trucker, Kevin Scarpete, was awarded with the coveted People’s Choice trophy, but it was not the truck that was on our cover, it was a different one (a gold-colored standup Pete).

Throughout the day on Saturday, our man John Testa from “Studio 10-4” did live remotes from the show.  Doing features on many of the trucks, people, and vendors, John always does a great job sharing from the shows that many folks can’t get to.  And at this one, we did something we had never done, with help from another one of our people, Tim Sieben.  Tim brought out his drone and we streamed live shots from it during the day and at night, during the light show.  It was pretty cool.  Thanks to all our sponsors who helped out with these live remotes, including M&J Truck Sales & Service, Dickerson Custom Trucks, Hood Skinz, and Rogue Truck Body.  Saturday night ended with a live band playing music until about 11:00 PM.

Sunday morning featured the raffle prizes being passed out and then the awards ceremony, which began around 10:00 AM.  Once all the trophies were awarded, the show officially came to an end around noon and the trucks started rolling out.  It is amazing how quickly these shows come to end once all the trophies are handed out!  When it was all said and done, a good amount of money was raised for Rene, and the show was deemed another success.

Thanks to everyone who came out and supported this event, along with the show producers, Erik and his wife Alicia Vaillette, and the folks at Commodity Transporters, for all their hard work making this event happen.  Nothing has been confirmed, but the rumors say this show is being moved a few hours south to the Turlock/Modesto area in 2023, so we will keep you posted on those details as information becomes available.  This year’s winners were: