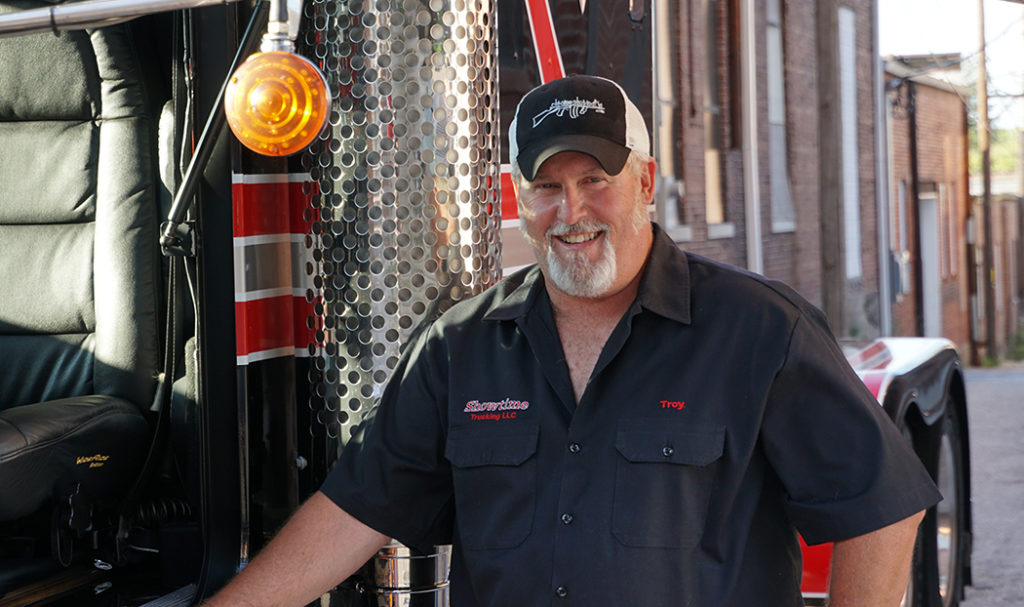 Who was Troy Huddleston?  Some knew him as the RoadWorks Ambassador, and some as the owner and driver of one of the coolest Freightliners ever.  Some knew him as a great family man and friend, while others knew him as Lil Hudd – a take on his father’s nickname, Big Hudd.  To many, he was often called The Legend.  If you have a few minutes, take a seat, get comfortable, grab some Kleenex, and let me tell you about this guy who I highly respected.  Troy was an honest Christian man and an incredible husband, father, son, brother, nephew, and friend who left us far too soon.

It is rare that I’m shocked and surprised with events that take place in life.  That was not the case when I received very sad news the afternoon of Tuesday, June 7, 2022.  On that day Troy Huddleston, our good friend, suddenly passed from this life to his eternal home.  I was stunned as I heard this news.  It’s one of those few times in my life where I was at a loss for words.  Preliminary reports say he died from a heart attack while out on the road, but that has not been officially confirmed, as of yet.

At the time of Troy’s passing, he had just celebrated his 54th birthday on May 31, 2022.  The news of Troy’s passing spread like wildfire on social media.  It was a testament to how much Troy was loved and respected by so many.  The testimonials came in from every corner of the country and from every aspect of the trucking industry.  The memories so many people shared of their personal experiences with Troy were incredible.  I honestly think an entire book could be written about this man and his life.

Troy Allen Huddleston was born on May 31, 1968, in Effingham, IL to Kenneth Huddleston and Kathy Ann Wendel Huddleston.  He married Maria J. Partlow of Yale, IL in 1997 in Gatlinburg, TN.  Surviving is his wife of 25 years, Maria, son Austin Huddleston, daughter Allison Huddleston and fiancé Connor Meinhart, and daughter Alivia Huddleston.  I had the privilege of speaking to these people and getting their thoughts about Troy for this memorial.

Attending Newton Community High School in Newton, IL, Troy was a proud member of the NCHS band and played a big, bass drum.  Troy even had the privilege of playing with the NCHS marching band at the 1984 Rose Bowl Parade.  After high school, Troy and some friends formed a band called Young Country, and actively played in their local area.  Throughout his adult life, he had many interests and hobbies that included customizing cars, vans, and semis, mud-bogging with his Bronco, driving in demolition derbies, and attending truck shows all over the United States.  However, the most important thing to Troy was spending time with his family.

After graduating high school in 1986, Troy attended Olney Central College where he  completed his Associate Degree in Body Tech in 1988.  He then opened his own body shop, but after only a short period of time, he decided to pursue his true passion – driving trucks.  He then bought his first truck, formed Showtime Trucking, and began hauling anhydrous fertilizer, propane gas, liquid fertilizer, and grain.

Purchasing his current truck, which began as a FLD120 Freightliner, he rebuilt the FLD a couple times, eventually converting it into a Classic XL Freightliner conventional and adding gullwing-style doors.  In its current state, it’s highly customized with black paint and red and silver stripes.  After its final rebuild, Troy named his Freightliner “Roll with the Changes” because he knew not everyone would like the changes, but it also summed up his outlook on life.

The visitation took place from 10:00 a.m. until 2:00 p.m. and was immediately followed by his memorial service.  Pastor Phil Boyd officiated Troy’s service.  During the service, Pastor Phil asked for testimonials from the attendees who knew Troy on a personal level.  Several of Troy’s friends and family members stood and told funny or moving stories about Troy.  One moment that hit home for me (and most everyone in the audience) was the reading of letters written by his daughters, Allison and Alivia.  It is rare for me to see big, strong, confident, successful men crying and, in some cases, shoulders quivering, but I witnessed this at Troy’s memorial service.  Tears rolled down my cheeks like a river.  As a group, we shared in the grief, deep sense of loss, and collective love we had for Troy.

The convoy to Troy’s final resting place was a sight to behold from the time we left the West End Center to the Partlow Cemetery, located in rural Casey, IL.  The funeral procession was led by Troy’s Freightliner with his casket carefully placed behind the cab.  Troy’s truck was followed by the “Unwound” Peterbilt show truck that Troy drove for RoadWorks.  Behind these two trucks were nearly 60 other trucks, of all makes and models, being driven by truckers from all over the country, followed by a convoy of 4-wheelers, that stretched out for well over a mile.

The drive through Newton was moving.  Many people from the community stood on the side of the road to pay their last respects to Troy.  People were waving, saluting, and placing their hands or hats over their hearts.  There were also many hand-made posters to honor Troy.  Seeing this, the tears began to flow again.  I have never been to a funeral with so many trucks and cars in the procession.  It is something I’ll never forget.  Once the convoy arrived at the Partlow Cemetery, the road leading up to the cemetery was almost completely lined with big trucks and 4-wheelers.  It was a short but emotional service, where we viewed Troy’s casket for one last time.

Over the past six months, I’ve had the opportunity to get to know Maria, Allison, Alivia, and Austin.  They all had many great things to say about Troy.  First, he was the consummate husband and father.  He loved and respected each of the children the same.  He was loving, compassionate, loyal, caring, thoughtful, honest, humble, and highly respected.  He was always respectful and a true gentleman with everyone. They all said their best times were on family vacations in Pigeon Forge, TN and Treasure Island, FL.  One of their favorite activities while on vacation was playing mini golf.  It was a family event that was always fun and competitive.

They all shared personal stories with me about Troy.  Maria told me the reason why Troy missed two GBATS shows in Joplin was because Allison and Alivia had been chosen for the NCHS Homecoming Court.  It was a once in a lifetime event and was something he would not miss for anything – even GBATS.  She also spoke of his thoughtfulness and love for giving people cards for special occasions with special messages written in them.  At the time of his passing, Troy had over 50 cards in his inventory to send to people for special occasions.

Allison shared with me her favorite times with Troy were on family vacations at Pigeon Forge, TN.  They vacationed there for several years and always stayed at the same hotel.  Her favorite family activities while on vacation were playing miniature golf, driving go-carts, dining out, and spending time together as a family in the evenings.  Another activity she enjoyed with Troy was getting together for family birthdays.  The qualities she most admired about her dad was his thoughtfulness, that he was a very caring and loving father who put family first, and that he was highly respected by all his children.

Austin’s best memory of Troy involved their classic tractors.  Both Troy and Austin inherited tractors from their grandfathers.  Troy owned a John Deere Model A and Austin owned a Farmall Super M.  It was the classic green versus red in the farm implement world, although he explained there was no real competition between them.  Austin enjoyed the tractor rides they would take together, which became a special time of bonding between the two of them.  Troy taught Austin throughout his life and raised him to be independent and hard-working.  He also encouraged him to always do his very best, to treat people right, to make people feel happy and comfortable, to be confident and stand up for himself, and be a man of his word.

Alivia shared with me some of her favorite times spent with her dad was when she had daily lunches with him at the local bowling alley her senior year at NCHS during the pandemic.  They both shared a passion for 70s and 80s music, and when in the car together, they would often sing and play the “name that tune” game.  When she attended truck shows with Troy, he would say random, silly things, or tell bad dad jokes that always made her laugh.  One of her favorite memories is the time she was driving a 4-wheeler on their property.  Troy warned her not to drive above 3rd gear but liking to drive fast (like her dad) this one time she shifted into 4th gear.  As she was jumping the driveway, she got thrown off the vehicle.  She was not injured, and the 4-wheeler was not damaged, but she did get a stern warning from Troy (with a smile) not to ever do that again!

The sense of loss for Troy will be lifelong for many of us in the trucking industry.  As we attend truck shows in the future, we will look for Troy, expecting him to roll in piloting the latest show truck and trailer for RoadWorks, as he had done for the past few years.  Their latest creation may be there, but Troy will not.  Ralph Banks, VP of Sales H-T/Truck Hero had this to say about Troy: “The success RoadWorks has experienced since the day Troy started working here was not accidental.  Troy was instrumental in the significant growth of RoadWorks.  The organizational response to the loss of Troy and outpouring of sympathy has been incredible.  It shows just how much Troy was recognized and respected across our 27 Truck Hero brands.”

We often ask the question, “Why are great men like Troy taken so soon from our lives?”  In this life, that question goes unanswered, but we were privileged that God loaned Troy to us for 54 years.  One of my favorite songwriters and singers is Vince Gill.  He wrote and sang the song “Go Rest High on That Mountain.”  Since Troy was a devout Christian, I would like to quote a line from this song in honor of our friend.  “Go rest high on that mountain.  Son your work on earth is done.  Go to heaven a shoutin, but for the Father and the Son.”  Rest easy, Lil Hudd, in your amazing new home in the presence of God!  We will all miss you, but we will see you again.

EDITOR’S NOTE: Thank you to everyone who contributed photos for this memorial article for our friend Troy.  You all know who you are!

The Art Of The Ride & More!
Can You Actually Load a Car Into The Bed of a Truck?
It Is What It Is
Tatra 8×8 Agriculture
Showing & Shining