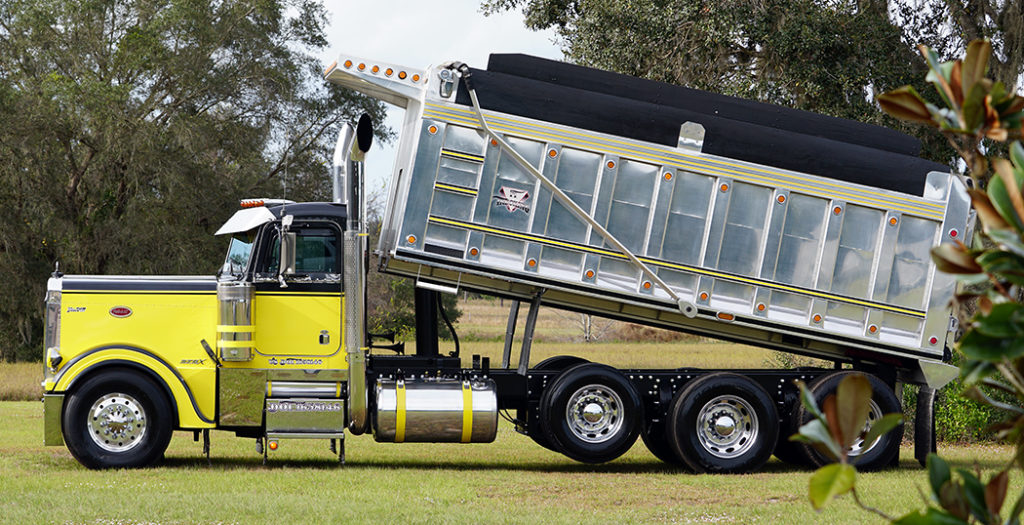 The sunshine state is full of big cities, large communities, and traffic.  For those that live in or travel through the state, you understand this fact firsthand.  Florida is also home to many great looking trucks, including the one pictured here – a 2000 Peterbilt 379 Extended Hood dump truck owned by Frank Trujillo (52) of FT Trucking, Inc. out of Groveland, FL.  Meeting Frank at a show several years prior, I was finally able to get his truck shot for this feature, which was a long time coming.

Growing up in West Palm Beach, FL, Frank had always liked trucks and was into souping up cars.  Things just continued to escalate from there.  His father played a formidable role in his life, teaching him many different things.  Coming to the States in 1959, his father was born in Cuba and is the first generation in their family to be involved in the trucking industry.  Believe it or not, if you’ve traveled through West Palm Beach, you’ve seen the terrible traffic, but there was a time that Frank saw when it was all just farmlands.

Starting out in trucking when he was 18 years old, Frank obtained a Chauffeurs license prior to the CDL coming out.  In the beginning, he worked at a company unloading trailers, and eventually worked his way up into driving.  In 1989, Frank bought his first truck for $20,000 and it was a 1986 Ford L9000.  Shortly thereafter, he started his first company, TRU Trucking, Inc., which remained based in the West Palm Beach, FL area.

The formation of TRU Trucking happened after much prodding from his father, who convinced his son to get into dump trucking, mostly to get Frank to stay more local instead of over-the-road.  Frank worked hard, including working at UPS for about four years while driving full time, so he could pay off the truck.  Back then, he did whatever needed to be done.  Between the two jobs, he’d truck from 6:00 am to 4:00 pm, then work at UPS from 5:00 pm to 3:00 am.  In 2000, Frank started a second company called FT Trucking, Inc. to separate out the different aspects and areas of his diverse trucking business, including the minority work they performed.

In 2006, Frank found a Peterbilt 379 dump truck that was yellow with black fenders.  It earned the name “Bling Bling” when attending a show in Miami by one of his buddies because it was all polished up.  In 2014, paint work was done by Frank in his buddy’s shop, and changes were made to reflect what you see pictured here today.  As stated earlier, the truck is a 2000 Peterbilt 379 with a 19-foot, 40-yard, R/S dump body.  It boasts a CAT C16, an 18-speed transmission, and 3.58 rears.

Anyone looking at the truck can see there are plenty of custom extras like  8-inch Dynaflex stacks, a 20-inch Valley Chrome bumper, a Murex visor, WTI dovetail fenders, and close to 300 lights.  The interior of this dump truck looks pretty amazing, too!  There are plenty of one-off items built by Frank, including the CB bracket and the flooring.  Most of the interior work was done by Ponch out of West Palm Beach, FL.

I met Frank for the first time at the 75 Chrome Shop Truck Show in 2018 when he and his son-in-law were picked as a calendar spot holder with both of their dump trucks, which included the pictured 379.  I specifically remember how bad the lovebugs were that year, and when we arrived at the photography location, the first thing they did was start wiping them off.  I asked Frank to explain his methods for the removal of these bugs, and why it is important to do so.  He said, “The easiest is to wash the truck in the shade while first soaking it in water, then pressure washing it off.  Another alternative is using dryer sheets, because there is a chemical in the sheets that won’t wreck the paint.  You want to get the bugs off at the end of each day because the bugs have an acid that will stain your bumper and eat at your paint.  Something else to keep in mind is keeping the truck polished and waxed so you always have an extra protectant.”

Frank was kind enough to give some advice regarding getting into dump trucking, which was close to the same advice I get from others in different applications of trucking.  Before even getting started, it is important to have your foot in the door somewhere, as this can be a hard industry.  With rising costs, an owner has to be prepared for anything, which includes making sure you have money set aside.  Another good habit is to have your equipment paid off prior to purchasing any more.  Also, learning to maintain and repair your own equipment can be a crucial part of trucking to avoid any unnecessary expenses.  Continual maintenance of your truck will keep plenty of life in it, and this would include not only the preventative maintenance, but also the other working parts, including the box liner, and regular polishing.

Since early on, Frank has always liked to have nice trucks, and you can definitely see that as you look at the images of this dump truck.  There is a level of pride that goes into each one of his builds which inevitably reflects how his customers see him when he loads or unloads.  Frank told me one of his favorite memories as a kid was being able to ride along with his dad during the summers and days off.  He was able to experience seeing different things, plus heard the trash talk over the radio, which made him feel like an adult.  At 12 years old, Frank would drive his dad’s dump truck out of the quarry while dad stood on the step outside the door.  His dad taught him the importance of listening to the truck versus looking at the RPMs, because the engine will tell you when it needs to gear up or down.

Today, Frank and his wife Ivonne (who got married in 2004) have four children – Jose (32), Alexa (24), Carina (20), and David (18), as well as Alexa’s husband Jonathan and their five-year-old twin boys, Geo and Gabriel.  Ivonne handles all the accounting for their “up north” operations, Jonathan works full time for the company, Alexa works part time with the company (along with having a full-time job), and Jose helps with billing at their “down south” location, along with being a full-time firefighter.  This truly is a family operation!

The company currently runs four dump trucks and five tractors, while the company in West Palm Beach is made up of all owner operators.  “Bling Bling” is still running full time and is currently being driven down south by one of Frank’s friends.  Frank still drives and dispatches full time, driving one of their newer dump trucks.  The south trucks (TRU Trucking, Inc.) provide materials for golf course restorations, and the north trucks (FT Trucking) haul potting soil by the truckload, as well as bagged product with their flatbed trailers.

Going to truck shows and being able to prep the truck(s) and swap stories with friends is something Frank enjoys.  The first truck show he attended was the Mid-America Trucking Show in Louisville, KY in the 90s, and the first one he took a truck to was in 1999 at the 75 Chrome Shop Truck Show, which was the year of their first event.

Special thanks from Frank to his wife for her love, support, and sticking by him all these years because this life isn’t easy.  Also, thanks go to his customers for providing the work, and to his father for teaching him about trucking and how to wrench and fix their equipment.  Today, because of his father, something would have to really be wrong with the truck for Frank to have to call for a wrecker.  When Frank heads to a show, he is responsible for his own detailing, with the exception of the polishing by McBride Polishing (Daniel McBride), a mobile polisher out of Orlando, FL who Frank has known since the early 90s.

Thank you to Frank for allowing me the opportunity to tell your story, as well as the continued friendship.  Since first laying eyes on this dump truck in 2018, I knew I wanted the opportunity to photograph it, but scheduling just didn’t want to work out.  After a long time coming, I finally had my chance to get the images and tell Frank’s story.  As always, to all the drivers out there doing the deal, truck safe.

Scoop: 2017 Honda Ridgeline Towing Capacity Accidentally Revealed?
Peterbilt with Aurora- and Paccar-technology
It Is What It Is
Black And Chrome
Can You Actually Load a Car Into The Bed of a Truck?