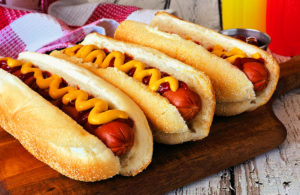 Before Columbus sailed the ocean blue, “dachshund” or “little dog” sausages were a food in Germany.  Some historians refer back to the 9th Century BC in the book “The Odyssey” that referenced sausage as one of the food sources.  Actually, sausage was one of the first processed foods.  But there is a debate about hot dogs.  Some say the first frankfurter was created in the German city of Frankfurt.  Others say, during the 1600s, a Coburg, Germany butcher named Johann Georghehner laid claim to creating the frankfurter.  The sausages became so popular, that after 535 years, they still celebrate hot dogs each year in Europe.  The town of Wein, Austria, also lays claim to wieners being eaten in 1487 – five years before Columbus set sail for what would become America.  So, how did the hot dog become famous in the United States?  Most European immigrants brought over their culture and cooking styles and tastes.  There were many types of sausages, but the hot dog has a special place in American history.  In 1893, a German baker started to make hot dogs in a bun at Coney Island.  But Chicago was the town that put the good old hot dog on the U.S. map.  It was the Columbian Exposition in Chicago that sold large quantities of hot dogs and buns.  Visitors realized that as you traveled around the thoroughfare, you got hungry, but you did not want to stop to eat.  So, what better food than a hot dog in a bun.  The same year that the hot dog became popular, so did the hot dog bun.  It made it easier to eat as you were walking around.  There are many more claims to how the wiener and bun got started, but we do know that the hot dog in a bun came from the immigrants that came to our shores.  This July 4th, many will grill the dogs and enjoy it as part of their Independence Day celebrations.  So, this 4th of July, whether you like your sausage plain, with ketchup, or mustard, relish, a bit of onion, or maybe with some tangy sauerkraut, you are a hot dog aficionado.  Enjoy the treat and thank the immigrants for introducing us to the American tradition – the hot dog in a bun.  Most of us will be waving flags, eating hot dogs, and enjoying fireworks this 4th of July!  I hope you have a safe and fun day and remember how proud we all are of this great country of ours.

It’s Finally On – We Drag Race ALL The EV Trucks You Can Buy to See Which One RULES the Rest!
Hans Louwet – Truckstar Festival 2011
Patrick van den hoeven – Nog Harder Lopik 2015
Keep Pushin’ On!
6.4L HEMI V8 in a Dodge Durango | Truck Central