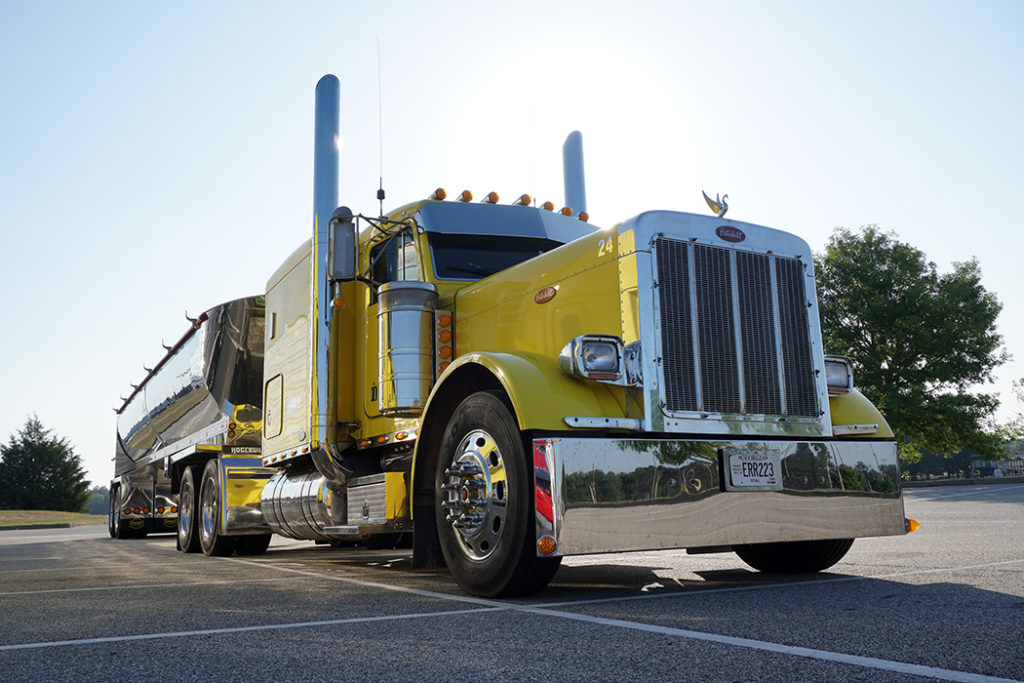 Each year, the Shine In The Pines Truck Show in Dublin, GA brings positivity to the trucking industry by charitably donating to a local family with a child going through an illness.  This year the show was held for Emmi Ruth Savage, a four-year-old little girl who is indeed, a little warrior.

Emmi’s parents, Justin and Jesse Savage, took Emmi in for a routine three-year checkup in late March of 2021.  From that point, when a mass in Emmi’s stomach was noticed, testing was began to find out exactly what it was.  There have been tears, worry, prayers, and many sleepless nights as they maneuvered through all the processes that had to take place.  Emmi’s first round of chemotherapy was on May 10, 2021, and the last of six rounds was concluded in September 2021.  Chemo treatments were discontinued, and the mass is being closely monitored, but due to her size, this mass can’t be removed.  They will continue to monitor the mass as Emmi grows into it.  Emmi’s parents credit all the success so far to the grace of God, and they continue, along with Emmi, to share their story.

May 20th to 21st marked the fifth annual Shine In The Pines Truck Show at the Southern Pines Regional Park in Dublin, GA.  Each year, this show grows more and more and is something I attend annually, as well as a lot of local trucks.  This event is one to attend because it is a great charity event with plenty of nice trucks to see, along with a car show, that is going on at the same time.

I went up to the show grounds on Friday, and the truck I noticed first looked familiar, but I thought, “It can’t be that truck.”  Oddly, I thought of a post Jake Bast made about him being in Georgia, but figured he was already pounding pavement westbound.  To my surprise, it was Jake with his white 2001 Peterbilt 379.  It was a great reunion, but it just got better as more trucks continued rolling in for the show.

Mike Davidson, who drives for Shimon Trucking in Rolfe, IA, brought his good-looking white Peterbilt 389 and matching 2010 Great Dane refrigerated trailer, along with Billy Montgomery of Always Haulin out of Fond Du Lac, WI and his sharp white, green, and purple 2019 Peterbilt 389 with a 2019 Cottrell 75-foot car hauler.  Bubba and Krystal Branch attended for the second year with their “Just A Phase” red Kenworth, along with yearly regulars including JT Mercier, Cody Anderson, Kenny Wilson, Robbie McMillan Jr., Ben Cadle, and so many more.

This year was hot!  There really isn’t any other word for it, and I’m not just talking about the trucks.  Shade was a “hot” commodity, and there were plenty of people utilizing their trailers to sit under.  From morning until evening, lawn chairs on the shade side of the trucks would inevitably move from one side of the truck to the other to avoid the sun.  Friday night on the lot didn’t show all the trucks that would be in attendance, but that quickly changed on Saturday morning as the field grew.

The cutoff for trucks to come in was at 11:00 am and the show opened to the public at noon.  Rain threatened throughout the entire weekend, and we all experienced a downpour on Saturday.  That was the only reprieve from the heat which, as anyone from the south knows, that just meant a lot more humidity and even more heat once the rain stopped.  Throughout the day, Emmi, along with her parents and older brother Si (Silas), were rotating between the sun and shade as they made their way around the show grounds meeting everyone in attendance.  Live music was provided by the Stone Creek Four Band, and they welcomed Long Haul Paul onstage to join them from 6:00 pm to 7:00 pm.

The awards were held Saturday evening, which included the results of the 50/50 drawing, which raised a total of $300.  Raffle items were awarded and when it was all said and done $6,739 was donated to Emmi Ruth’s family, which included donations of $200 from Diesel Life, (2) $25 gift cards from Howard Shepherd, and a gift package with $100 from Kenworth in Minnesota.  SH Tube, with the help of Bubba and Krystal Branch, raised an additional $1,000 and raffled off a voucher for SH Tube products, which was awarded to Mike Davidson’s father Kenneth.

Probably one of my favorite parts of the show was seeing three little boys gathered around Jake Bast and his truck on Friday.  Jake had yet to wipe the truck down, so these boys had a chance to sit in it.  I managed to snap a picture of him sitting on the step of his truck, talking with these boys, and it was one of those moments that I was not only proud to know Jake, but proud to be acquainted with so many amazing drivers who keep America moving.  Driving is one thing, but when you take time to talk to people, especially the younger generations, you are sparking an interest in the possible future drivers of this industry we are so passionate about.

Special thanks from the show to all the volunteers, sponsors, donors, and vendors, because without everyone’s help, this show would not be a continued success each year.  Please keep praying for Emmi Ruth and her family as they continue on their journey.  There was a total of 85 trucks registered this year, along with a total of 34 entries in the car show.  The event finished with the light show, jake brake contest, and then a light parade around the park.

At every show, the recipient family and child are in attendance, and they get the opportunity to meet all the drivers with registered trucks at the show.  It is a very cool experience that not only is the show doing a charity event, but we all get to meet the recipients, as well.  Emmi is truly a little warrior and radiates a happy personality full of strength for such a little girl.  Mark your calendars for May 18-20, 2023, for next year’s show, and watch their Facebook page for updates.  As always, to all the drivers out there doing the deal, truck safe.