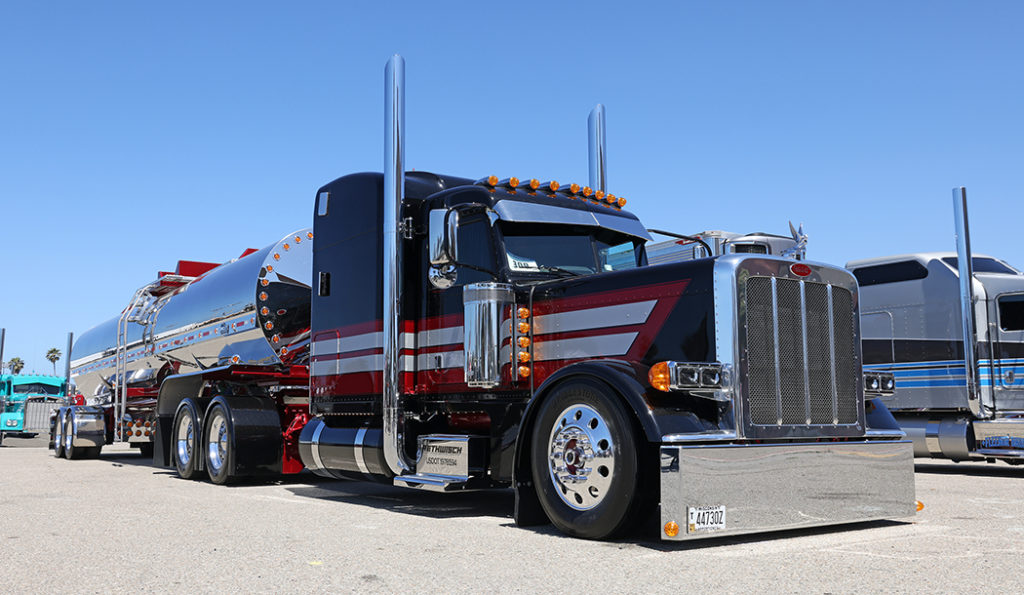 It’s always nice to get away for the weekend and enjoy the beach.  The American Truck Show Circuit (ATSC) has produced 14 great events across the country since its inception in 2015, and their most recent, held in Ventura, CA on Father’s Day Weekend (June 17-19) was ATSC’s first since 2020, when it hosted an event in Wisconsin amid the covid lockdowns.  Dynaflex Products, a key sponsor of ATSC, along with Big Strappers Apparel, teamed up to produce this fun, industry leading event.

Set in an idyllic location with the Pacific Ocean as its backdrop, the 2022 Dynaflex Original Monster Stacks Shootout featured 72 registered trucks, which is a special number for the 1972 established company that is celebrating its 50th year of making high quality, American-made, chrome-plated exhaust parts.  The beachside event featured two ATSC sanctioned contests – the National Championship and the more casual Wash and Show competition.

On Friday, a few vendors setup their booths, and trucks began being parked.  This was a painstaking process, as Cory and his crew had a well thought out and organized plan for getting all the trucks straight and spaced just right.  They did finally accomplish that goal, but it did take some time.  On Friday night, Dynaflex brought out the In-N-Out Cookout Truck and treated everyone to dinner.  It was a nostalgic moment that brought back memories of In-N-Out bringing their beautiful fleet of trucks to all the shows back in the 90s.

Since we didn’t have a booth and we were there to just walk around, take pictures, and have fun, we arrived at the show on Saturday afternoon.  The lot was pretty full, and most of the trucks were parked and on display in all their glory under the warm sun.  We were graced with amazing weather that weekend, which featuring blue skies and temps in the low 70s.  Staged directly at the front of the event, with twice as much space between the trucks compared to the Wash and Show sections of trucks, were the top-notch competitors of the National Championship presented by Dynaflex.

The competitors in the National Championship contests are separated into divisions based on mileage (limited or working) and display type (bobtail or combo).  Five industry experts judge all aspects of a National Championship competitor’s truck – interior, exterior, engine – as well as the quality of the driver’s presentation of their equipment.  Featuring an electronic, bias eliminating scoring system where high and low scores from each judged category are dropped, the ATSC judging platform continues to set the standard for highly competitive truck contests with its fair and consistent results.

In addition to premium parking positioning and being part of the most esteemed contest on the lot, National Championship competitors also got a shot at winning ATSC’s renowned Best of Show trophies.  Made by Dynaflex and customized to each event location and host, this year’s trophy featured chrome palm trees at varying heights, on a large chrome base, with blue lighting details – a nod to the event’s California beachfront location and manufacturing company’s home state.

Although having a good time and minimal cleaning is the focus, the Wash and Show competition was still hot with rides from notable fleets like Double E Trucking (featured on last month’s cover), Central Valley Transport (with six rigs), Rollin R/NAVA, and North Coast Wine coming through for the weekend.  Other notable trucks in the Wash and Show included Kris Gaare’s latest acquisition, a 1989 Peterbilt 362 cabover, Flat Top Transport’s battleship gray standup 389 Peterbilt with red stripes, Vince Jenkins’ blue 389 with light blue stripes and a matching heavy haul trailer, and Ron Beer’s all-white Peterbilt 389 with a big sleeper (our March 2022 cover).

After hanging out with some of our friends on Saturday and taking lots of pictures, about 50 people from the show took over a room at the steakhouse next to the hotel for dinner.  As you might expect, it was a lively crowd and a good time.  After dinner we all headed back to the fairgrounds for the light show.  Lighting up the lot in a spectacular display of brightness, it was awesome to see all the creative ways these truckers light up their rides.  These days, there are a lot of glass lenses out there, and they always produce an amazing glow pattern that stands out like no other.  I got a lot of great shots!  We even helped a little boy named Waylon Allison celebrate his sixth birthday on the lot that night, too.

Sunday morning got off to a slow and relaxing start for us dads, being that it was Father’s Day, but then it was time to kick it up a notch for the awards.  In the Wash and Show classes there were various winners in each class, but the Best of Show Bobtail went to Kris Gaare and his “Peep Show” Peterbilt cabover, and the Best of Show Combo went to Cole Barbieri of North Coast Wine and his “Red Red Wine” 2011 Peterbilt 389.  In the National Championship contests, it was a bit more one-sided.

For the National Championships, in the Limited for Show Bobtail contest, Big Ed Davis and his turquoise W900A won every class and the Best of Show award, while every class in the Limited for Show Combo contest was won by Bill Rethwisch, including the Best of Show award.  In the Elite Working Bobtail contest, Kaleb Hammett out of Texas and his “Hoss” Red Peterbilt with gray stripes won every class and Best of Show, while the Elite Working Combo contest was dominated by Josh Carballo and his black 2015 Peterbilt 389 with blue stripes, hooked to a set of nice hay doubles, which took first place in every class, and bagged the big Best of Show trophy, as well.

Some other notable trucks in the National Championship were a few from Fleenor Brothers out of Missouri, past cover truckers CG Soza, Ruben Vargas, and Albert Guzman, who had a new glider making its debut out on the lot, and a slick black and purple Peterbilt cabover owned by Justin Allison.  Unfortunately, they hit a few deer on the way home from the show, which did a lot of damage.  But Justin assured me that it would be “good as new” in no time.  Roel and Joyce Hofstee of Hofstee Farms also had a few trucks in the show – one in the National Championships (their purple and white Pete 359) and two in the Wash and Show (a maroon and silver 389 and their classic red Bubblenose Pete).

Thanks go to A&L Truck Supply, California’s premier chrome shop, for covering all the competitor meals at any of the local food trucks that were on the lot.  Competitors also got access to free beer all weekend courtesy of Fitzgerald Peterbilt and the Semi Casual Show, along with a free entry in the Dynaflex Poker Tournament on Saturday night, where great prizes were up for grabs.

As the trucks began to roll out of the fairgrounds and everyone waved goodbye, as always, it was bittersweet.  It’s nice to be done with something, but it’s also a little sad.  Truck shows are like that – especially when you have been to as many as I have over the past 28 years.  Saying farewell to that amazing coastal weather was hard, and it wasn’t long before we were back in those triple digits of California’s scorching hot central valley.  And, just like that, our weekend getaway at the beach was over… but we can’t wait until the next one!