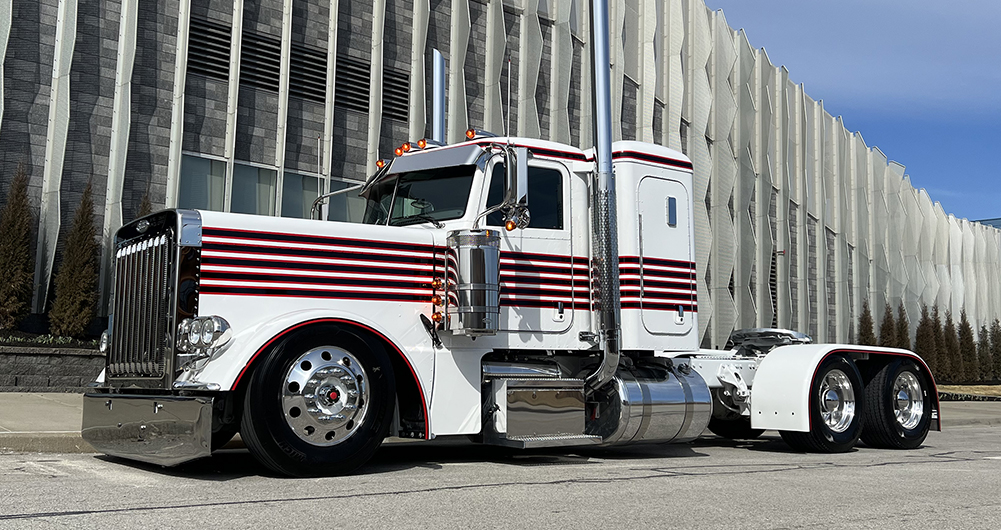 This month’s truck is special to me and our crew at KC Pete.  Each year there is a farm show in Kansas City and, as a local dealership, we like to go to the show to recruit help and introduce ourselves to the locals.  I have been blessed over the years to order and build whatever I want for our booth at this show.  Unfortunately, beginning last year, we are limited by Peterbilt with what we can order, and we did not have any “extra” trucks for this build.  That brings us to Mandeep Chhina (38) of Union City, CA.  Married for nine years to his wife Navijot (Navi), the couple has two children – a son named Abhay (6) and a daughter named Rubab (2).

Coming to America in 2003, Mandeep and his family landed in the Bay area of California.  Unlike other folks we know, his dad was a lawyer, and his mom was a teacher.  His mom is retired and lives with them, and his father, unfortunately, passed away a few years back.  At 19 years old, Mandeep got his CDL, but because he had no experience, nobody would hire him.  He ended up getting a dock job at FedEx and, a year later when someone quit, he took advantage of his CDL and started driving the yard dog.  After turning 21, he began driving OTR for FedEx.

Three years later, in 2008, Mandeep began pulling a tanker and delivering fuel locally.  Around that time, it became his dream to buy a cool Peterbilt with a long hood.  God placed everything just like it needed to be, and in 2016 he was able to buy his first truck – it was a Peterbilt day cab with a short hood, but it was still a dream come true.  With talk of the 389 being discontinued, Mandeep decided to call me, saying, “I am not sure what I want, so maybe you can design something for me.”  I asked him if he was in a hurry, and he said his current truck was fine, so I decided the farm show truck would be his truck.  His simple requests were that the truck be cool and have an old dash.

Originally, he wanted a day cab, because of the weight, but I like the look of the 36” flattop sleeper.  He agreed to the bunk if we swapped the rear tires to wide base rubber to help with the weight increase.  We discussed colors, and he was open to anything.  After the truck arrived, Cody took on the project.  Pat the painter laid out the 1985 paint scheme just as I wanted.  We ordered the truck without a back window and then had Cody cut in a day cab window.  Our friends at Midwest Tint hid a Peterbilt logo, in two shades of tint, on the back window.  You can’t see it much from the outside, but from the inside, you see what’s up!  Adding a front air bag system from NorCal Customs, along with one of my body drop kits, this truck got really low (Valley Chrome made us a 16” bumper to accommodate the rig’s lack of height).

This truck had a lot done to it.  Opting for a stainless 379 grill crown and bars from 12 Ga. Customs, we also installed double 359 headlights on factory brackets, polished 12 Ga. mirror arms, special lowered breather light panels with three lights, Bub made me a special “Bowfish” visor, five bullet cab lights were added, along with a 6” dummy exhaust with 359-style elbows and heat shields.  The truck also has a hidden DEF tank, chopped breather screens, painted door handle cups, lowered seats, a 359-inspired steering wheel, a painted Shox box cover with five glass lights, and a painted Merritt flush deck plate with polished side rails.  Finishing off the accessories, we mounted Fisher aluminum full fenders with hidden brackets, painted white with black and red trim, to match the rest of the paint.

Wanting to be surprised, Mandeep did not want to see any pictures of the truck during the build.  He did ask, however, that everyone involved with the build sign the truck somewhere.  So now, buried under the clear behind one of the breathers, is the text “Farm Show ‘22” along with signatures from Cody, Tyler, Pat and me.  I can’t thank Mandeep enough for letting us design his dream truck for him and letting us display it in our booth at the farm show.

After getting parked at the farm show on Thursday afternoon, I finally sent Mandeep some pictures that night and then held my breath… he was super happy!  He and his buddy Gil came out a couple weeks later to take it home.  He really likes his new truck and is surprised at all the compliments he gets from “normal” people out there – not truckers.  He gets a thumbs up from folks in cars and on motorcycles (kids and adults alike).  Needless to say, he is very pleased.  If you see Mandeep out there delivering fuel, give him a shout, just don’t ask for a horn honk, because he only has a city horn, for now.

It Is What It Is
“If I Can Do It, So Can You!”
Do You REALLY Need Snow-Rated Tires on Your 4×4 Truck to Survive the Winter? Let’s Find Out! | Ep. 2
Black And Chrome
A Cool Campout