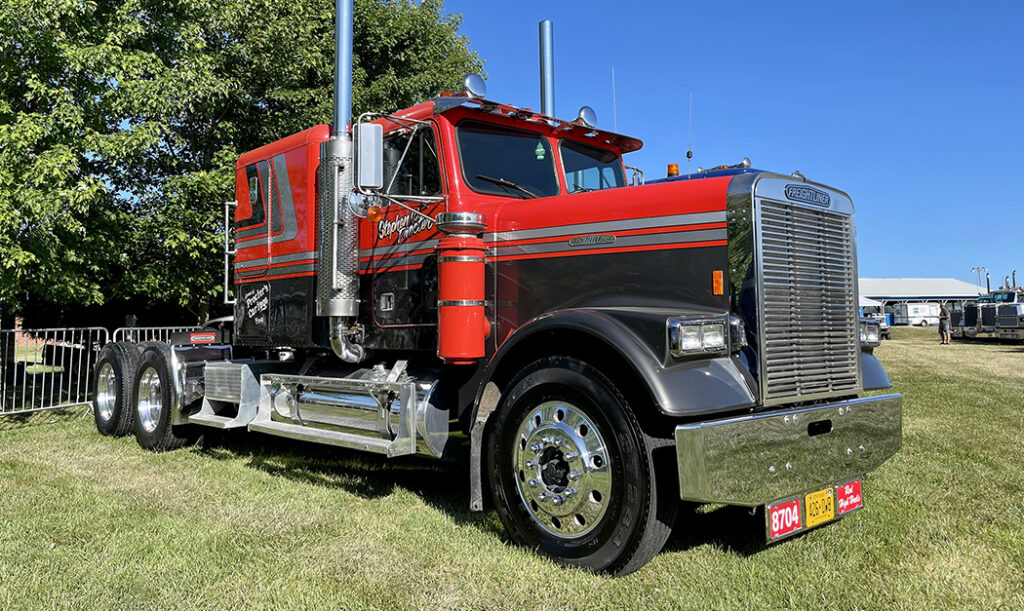 It’s the very beginning of July, and you’re sipping an ice-cold beverage with your friends at a truck show over the holiday weekend.  No, not that holiday… it’s Canada Day!  Every year on Canada day weekend, hundreds of trucks of all vintages gather for the Clifford Truck Show in Clifford, Ontario.  Hosted by the Great Lakes Truck Club, the event takes place at Rotary Park in the rural Canadian town, and it is an absolutely incredible collection of trucks.

“The show originally began as Rotary Fest with a truck component,” co-founder, Chris Hall, told me.  Later, the Rotary club handed over the event, and it became a bonafide truck show (with the Rotary providing delicious food all weekend).  Verdun Zurbrigg, Rob Johnson, and Jim Harkness were all instrumental from the early days.  The founders discussed becoming an ACTA or ATHS chapter, but instead went the route of being a standalone club.  While the club itself has quieted down a bit since the Covid pandemic, the show still went on in 2021 and 2022.

Most participants hail from around southern Ontario, but you will see some come from far and wide.  “I start noting names from months in advance, and like to send letters to personally invite them,” Hall told me.  Personal touches like this continue on to the show, as well.  Because the committee is a group of friends, it is a laid back, welcoming event.  In true Canadian fashion, everyone is friendly, which really makes it feel more like a family reunion than anything else (that is assuming you like your family).

While there is not an official age requirement for rigs, any that are 25 years or newer must have an exposed exhaust system and/or air cleaners.  “Our thoughts on that are partly to keep things classic, and it has worked.  It gives people with newer trucks a chance to bring them to a show.”  This was specifically to avoid being one of those shows that pigeonholes “newer” old trucks, like those from the 1970s and 1980s.  “It’s extremely important for us to get the young people interested.  That way the guy who brings the new truck can fall in love with the old trucks at the show.”

As far as older trucks go, cabovers have been in the limelight since the beginning.  “For someone who has never been there, it can be a bit overwhelming to see so many cabovers all lined up.  Remembering truck stops back in the 70s, there’d be whole rows of them,” Hal reminisced.  Cabover Row groups these classics together, facing each other.  It’s definitely an impressive sight.

A melting pot for all ages, some attendees simply come to visit in the camping area.  That’s where I spent part of Saturday morning this past year.  Minutes after I arrived at the show, I was whisked away on a golf cart to meet Ed.  I wasn’t entirely sure what was going on but was briefed that Ed Wesselius was Jerry Reed’s stunt driver in the 1978 truckin’ classic, High Ballin.

Ed, a trucker, happened to be a friend of the director, Peter Carter.  Carter would occasionally ride along with him.  One day, he told Ed he was making a trucking movie.  With no previous stunt driving experience, Ed spent four months of a cold Canadian winter filming in the Toronto area.  I talked with him for an hour, and our conversation is on my YouTube channel.

I could go on and on about how great this show is.  I’ve made the six hour drive up from Ohio four times now.  Of the dozens I’ve attended around North America, put this one at the top of your list of “want to attend” shows if you find yourself in Canada around Canada Day!  There, you will find a treasure trove of amazing rides you’ve never seen before.  Take it from me, eh, you’re going to love it up in The Great White North!

Do You REALLY Need Snow-Rated Tires on Your 4×4 Truck to Survive the Winter? Let’s Find Out! | Ep. 2
The Art Of The Ride & More!
A Cool Campout
It Is What It Is
Black And Chrome