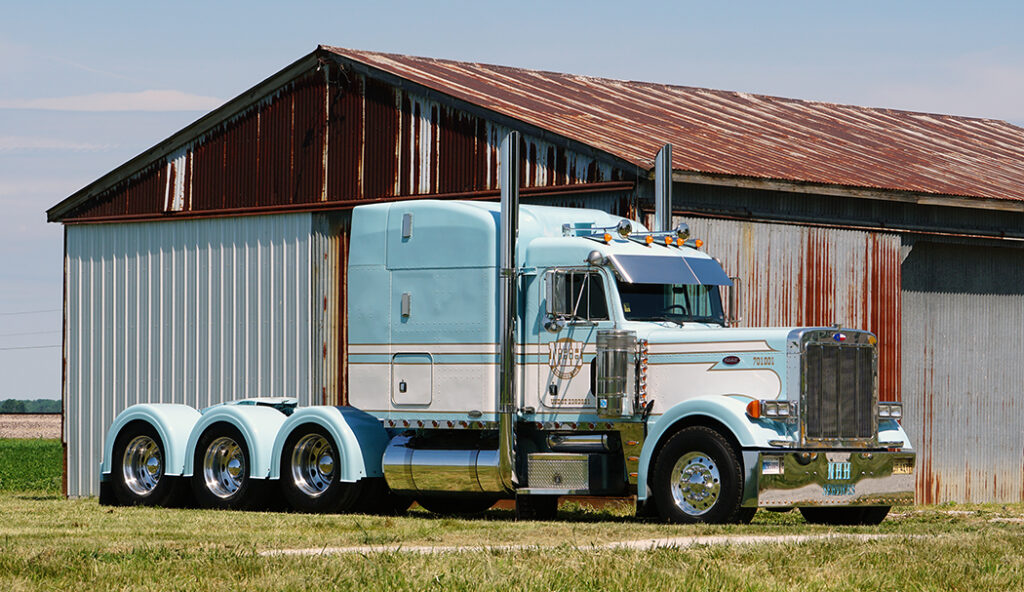 The frequent washes and constant weather watching, the weekends spent doing maintenance, and looking back as you walk away from your truck, are all indicators that embody the meaning of “pride in your ride” for many truckers.  Their rig is their rolling business card and a direct testament of who they are.  The level of pride some have in their truck is often a reflection of themselves, and carries over into other capacities of their life, much like Jesse Merrell (45), with his work, his trucks, and his life.

It is common that I find drivers who are first and second generation in the trucking industry, but what is really cool is when the drivers are third and fourth generation.  It is not only the thought of that many years of trucking in a family, but the rich history passed on through each generation.  Jesse Merrell, COO (Chief Operating Officer) of Medallion Transport Holdings, the parent company of NHH Services, LLC is fourth generation, and next year will mark 100 years of trucking in his family.  His great-grandfather was a farmer, but as the economy started declining in 1923, he went into trucking, and continued to do it until he retired in 1969.  Jesse’s grandpa was in trucking from 1961 until 2012, and his father began trucking in 1976 – and is still currently leased to NHH Services, LLC without any plans of retiring anytime soon.

Jesse was interested in farming, but also had a big interest in trucks and heavy equipment.  Unconsciously, he probably knew he would end up in trucking, but he continued with an agricultural mindset.  At the age of 18, in 1995, Jesse obtained his CDL as a way of earning money while he was in college at Purdue studying Agriculture.  He earned his bachelor’s degree in Agriculture Economics and utilized this degree for about a year after he graduated, but then, trucking happened.  Trucking was always in his blood, and like most, he just couldn’t get away from it.

With a background already based on heavy haul trucking, Jesse went to work for Dallas Mavis in 2002 as an owner operator with the purchase of his first truck.  Native to Indiana, he ended up moving to Texas in 2005 because that is where the movement and exporting of heavy equipment happened.  In 2007, Jesse ventured on his own and started National Heavy Haul, while remaining leased to Dallas Mavis.  Also in 2007, Jesse and his wife Britni were married on May 19.

In 2010, Jesse and his father Jeff purchased a black Peterbilt 379, with a 12-axle beam trailer, while they were in business together.  The two opted to repaint the truck to maroon and white with a Seminole paint scheme in 2012, which is the same year they left Dallas Mavis, obtained their authority, and formed NHH Services, LLC, along with Medallion Transport & Logistics.  Eventually, though, Jesse’s father Jeff wanted to get back into trucking again, so he bought the Peterbilt 379 in 2014.  With that purchase came some changes, including an auxiliary transmission, heavier gears, and heavier axles.

Repainting the truck again in 2021 to the light blue and white you see here now, when Jeff told Jesse about the colors he chose, Jesse wasn’t all that excited.  But when he finally saw it in person, he knew he needed to have the truck.  So, in the spring of this year, Jesse became the sole owner of the Peterbilt.

This light blue and white 379 is a 2000 model backed by a CAT C16, an 18-speed with a 4-speed auxiliary, 5.64 gear ratio, 56,000-pound rear ends, and a whopping 356” wheelbase.  The truck also has 7” exhaust, a RoadWorks visor, and plenty of little custom pieces that were purchased from 4 State Trucks, which were all installed by Jesse and his crew.  Danielle (VP of Operations) and Jess (a Medallion agent in Birmingham, AL) gifted Jesse with a custom Talladega bumper with “NHH Services” cut out of it on the front.

Yes, this truck has a true twin stick setup!  Some may wonder why it was added, but there is a purpose.  The auxiliary transmission has two reducing gears, so Jesse can go to a gear reducer on the bottom side, which helps prevent slipping when pulling heavy weight on a hill or on soft ground.  If you slip, you can break your axle or power divider in the rear end, which would be a costly incident.  The fourth gear is an overdrive, which is beneficial when you’re empty, allowing you to run at a higher speed, without taxing the engine.

Back in the 80s, regrooving tires was a thing, and Jesse remembers at around eight or nine years old going to the shop to regroove tires.  He said it was physically brutal and one of the dirtiest jobs, but it wasn’t this work that he fondly remembers, but the stories.  He would help his dad and grandpa while listening to stories of the “good old days” they told, along with the stories from other drivers that would stop in.  These stories were not only about how trucking was, but lessons Jesse has carried with him.

The first truck show Jesse attended was the Mid-America Trucking Show in Louisville, KY around 1982 with his father and grandfather.  Since then, he has made many trips to Louisville and, finally, after getting tired of everyone else getting to have all the fun, he finally registered a truck and attended the 2021 Truckers Jamboree in Walcott, IA.  I asked him what his favorite truck show was so far, and he said, hands down, the Big Iron Classic in Kasson, MN because it is a big group of working-class trucks.  He admired the custom parts drivers added to their trucks, which were items they had fabricated themselves, not bought off a store shelf.  He also mentioned the immense pride he could see in these working trucks.  More importantly, the connections with the people there and all the camaraderie helped to make this show one of Jesse’s favorites.

With all the truck shows out there, nothing seems to be better than the charity shows as a way for the public to see what kind of positive impact the trucking industry can have on those in need.  Jesse and his crew are putting together an annual truck show that will see its inaugural event next year, on August 25-27, at the Tipton County Fairgrounds in Tipton, IN.  The show will be called Truckers at Heart, with 100% of proceeds benefiting Ronald McDonald House.

I asked Jessie who his biggest influences are in life and in business and he immediately spoke of his father as the hardest working human being he has ever met.  As a man, unwavering in his principles, Jesse said he succeeds because he will work his fingers to the bone to meet his every goal.  Jesse mentioned that in life and career it is important to find and surround yourself with mentors who are successful at what they do and may also have a life like what you want.  “Pay attention to your mentors for what they do so you can learn what does and doesn’t work,” he said.

Gary Weilheimer, who is the owner of Medallion, is one of Jesse’s mentors.  Gary is a great business owner with a humble personality.  He comes out to the shows and has taught Jesse about good business practices.  Gary has a belief with a vision of making things better for the trucking industry.  Jesse strives to be the best person he can be because, like he said, “When I’m gone, my kids aren’t going to talk about how much money I made, they’re going to talk about what kind of man I was.”  And he is right!

Today, Jesse and Britni are back in Tipton with their three children, which includes their daughter Emerson (16), son Luke (13), and their youngest son Matthew (8).  NHH Services, LLC owns two trucks, which are strictly show trucks.  One is the pictured Peterbilt 379 and the other is a 1980 Kenworth W900A (also pictured), which Jesse purchased from the original owner, Paul Young, who bought the truck brand new in 1979 from Kenworth of Indianapolis.

As COO, Jesse is responsible for overseeing all the operations, including dispatching of approximately 500 trucks (all owner operators), maintenance, and safety.  NHH also owns about 150 trailers they maintain and rent out.  He has a qualified team of co-workers who work together for the same goal of not only doing what needs to be done, but also creating a great work environment for the employees and owner operators, too.

Thank you from Jesse to his father, family, friends, and all the companies for their help and continued support, and to all the owner operators and employees who help make the companies what they are.  Special thanks go out to Luke Merrell and Sam Cline for their continued help during the summers, helping to keep both the Peterbilt and Kenworth ready for all the shows.

I first saw this truck at this year’s Shine In The Pines Truck Show in Dublin, GA and it caught my eye right away.  I was able to speak with Jesse very briefly but had more of a conversation with Danielle (previously mentioned VP of Operations).  Through our continued communications, we set up the time for me to come up to photograph the 379, along with the aforementioned A Model.  Tipton, IN was another area that I had not been to before, and it was definitely a beautiful area to explore.

Thank you to Jesse for making sure the trucks were cleaned up and getting them moved around when I was up there.  I appreciate the opportunity to have been able to photograph the trucks, as well as document your trucking history.  Thank you to Danielle Szerlik for her awesome communication and scheduling skills to make this all come together.  Work ethic and presentation is always a reflection of yourself, with who you are in your career, as well as in your personal life.  As always, to all the drivers out there doing the deal, truck safe.

Showing & Shining
Tatra 8×8 Agriculture
Can You Actually Load a Car Into The Bed of a Truck?
Fun Raising Funds
This Is The Cheapest New 4X4 Truck You Can Buy & It Is Still Shockingly Expensive!