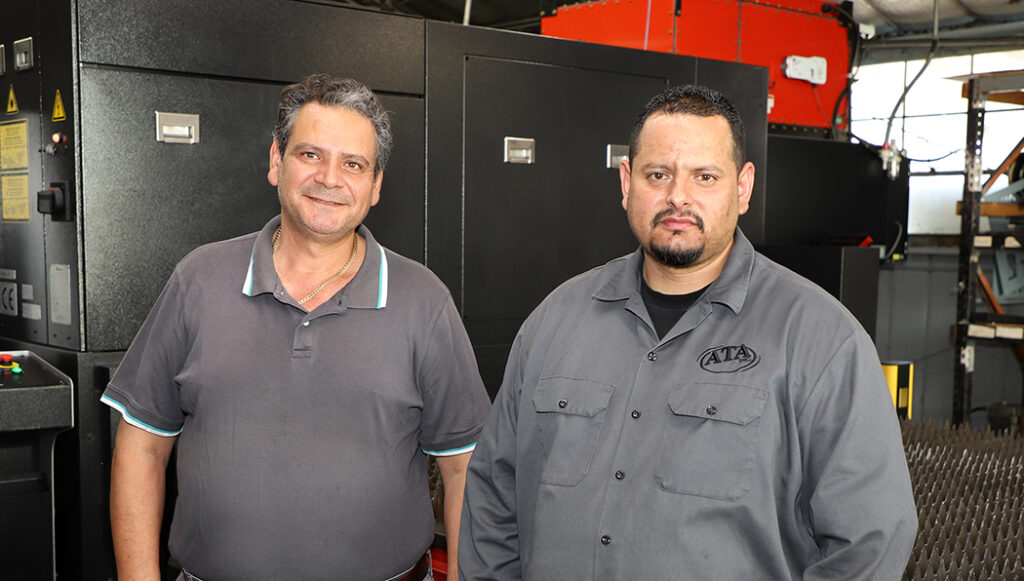 The trucking industry lost an amazing and creative man who designed some of the coolest accessories for trucks, and 10-4 Magazine lost a good friend and business partner when Javier Alejandro Aranda Jr. (known to most as simply Junior) passed away suddenly on September 7, 2022.  He was only 42 years old.  The man behind Aranda Truck Accessories (ATA), along with his father and other family members, was a fiercely loyal friend who always went out of his way to help those around him.  We were fortunate to have known him for many years and got to watch him grow and succeed.

Growing up on the mean streets of Los Angeles, Junior didn’t always make the best decisions when he was young and found himself in trouble more than once.  His father, Javier Sr., back in the day, worked for a company in Southern California called Wingmaster, making stainless wings for trucks.  After leaving there, he continued to manufacture stainless accessories in their garage, and eventually, with Junior, the two opened a chrome shop in Los Angeles called Aranda Truck Accessories.  This shop sold their products, along with others, and quickly gained a lot of notoriety for the amazing creativity and craftsmanship they put it into their parts.

Once the business took off, they moved into a larger facility and then began focusing on manufacturing various aluminum and stainless accessories for trucks.  Junior was a driving force in this business, and had his hands in everything including product development, marketing, truck shows, customer and employee relations, sales, and the business side of everything.  Junior said on more than one occasion, this business literally saved his life!  Focusing on building the business and taking care of his family, Junior was forced to grow up and take responsibility for himself and his actions and turn his life around.  And from that point on, he took that responsibility and commitment very seriously.

Starting out in that garage with just one old machine making a few custom parts, 20 years later, ATA now has about 2,900 base parts that can be customized to millions of options.  Making aluminum and stainless accessories for big rigs, they specialize in bumpers, grills, trim pieces, visors, box and step covers, light panels, rear light bars and step plates, but they can make virtually any part.  My wife and I went to their facility back in 2019 to take pictures and interview them for a story about the company.  We had a great day hanging out with everyone at the shop, including Junior and his Pops.

At the time, they had just acquired a new state-of-the-art fiber laser machine which could accommodate an 80” x 160” sheet of metal and cut at an astounding speed with precision.  While we were there, they handmade me a one-off stainless version of our 10-4 Magazine logo, and it still sits on my desk today.  After my business partner Erik passed away in 2019, Junior and a few others from ATA came to the “Celebration of Life” party we had for Erik and, as a gift, Junior brought stainless nameplates for a few of us at 10-4.  Me and my wife both have these cool custom nameplates on our desks, as do the others who received them that day, as well.  Junior was just nice and thoughtful like that.

Not long ago, Junior got into motorcycles.  Purchasing his first bike – a black 2004 Harley Davidson Softail Deluxe – he did so much work to it during the first week after buying it that it was hardly recognizable from the bike he had just bought.  Along with one of his friends and good customers, he joined a small motorcycle club called Brothers of Nations.  This club quickly became another family to Junior, and he really enjoyed spending time with his brothers there.  Later, he got a second a bike, which was dark green, and this one was his favorite.

On Wednesday, September 7, while on his way to a birthday party dinner with his club brothers on his green motorcycle, Junior was involved in an accident that took his life.  The club has vowed to repair his helmet and memorialize it, along with his jacket, in their clubhouse.  Many of the people at ATA are family, and most have committed to keeping things going and moving forward with the business.  As his father recently said, “There’s no way to replace someone like Junior, but we can continue succeeding in his honor, because that is what he would want.”

Junior leaves behind his wife Maribel of 20+ years and a 21-year-old daughter named Indika.  He also has four younger brothers – Aldo (40), Luis (37), John (35), and Sid (26), along with a sister, Cristina (32).  His mother Maria and father Javier Sr. (AKA Pops) divorced many years ago, but both are still alive, and both had great relationships with their son.  He also leaves behind his staff of employees at ATA who were like family to him, as well.  We at 10-4 will miss visiting with Junior at the truck shows and seeing the next crazy thing he comes up with.

A viewing was held for Junior on October 19 at San Fernando Mission Hills Mortuary in Mission Hills, CA, and his memorial service was held the next day on Thursday, October 20, at the same location, where he was also laid to rest.  Speaking to his brother Sid after the service, he and “Pops” were so appreciative that many came out to say their goodbyes and show their final respects.  Junior had touched more lives than any of them had imagined, and for that, they are truly grateful.  Junior, you we will be missed dearly, but your spirit lives on in your family, friends, and business, so rest in peace now, brother.

Black And Chrome
Peterbilt with Aurora- and Paccar-technology
Scoop: 2017 Honda Ridgeline Towing Capacity Accidentally Revealed?
It Is What It Is
Showing & Shining