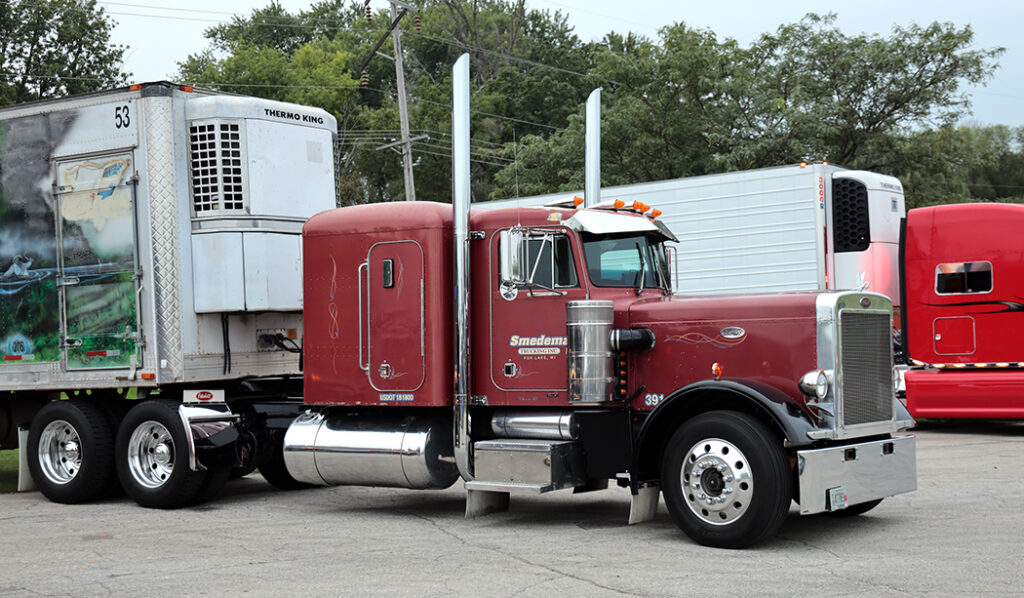 The second weekend of August is a busy time in most midwestern states.  For one, it’s the “official start” of state fair season throughout many of these states.  Also, that weekend was the 33rd Annual Waupun Truck’n Show (WTNS).  This event is open to the public with free admission to all attendees.  The WTNS was held once again at the Waupun Community Center (WCC) in Waupun, WI on August 12-13, 2022.  I’ve written in the past what a wonderful community Waupun is, with very open and friendly people, and that hospitality continued at this year’s event, as well.

This show featured another year of typical midwestern weather.  It was beautiful on Thursday with lots of sun, low humidity, and temperatures in the mid-80s, but the weather changed, as a cold front came through the area on Friday.  Both Friday and Saturday were cloudy and cooler, with temperatures in the mid-70s.  The cooler temps were good for spectators, but the clouds were not so great for photographers.

This year’s truck show was very well attended with participating trucks and spectators.  With a total of 320 trucks registered for the show and parades, the breakdown was 258 competition trucks and 62 parade only trucks.  The official opening of the WTNS was at noon on Saturday in front of the WCC.  The presentation of colors was conducted by the local American Legion, followed by the singing of the National Anthem.

As with previous events, there was recognition for those who have made significant contributions to this show and passed on this last year.  This year’s memorial was for Ron Vande Zande.  He was one of the founding members of the WTNS and was instrumental in its growth and development.  He was key with ensuring funds were raised every year for various charities including the MACC Fund, Make-A-Wish, Special Olympics, and REACH Charities.

Funds raised for the top ten spots for the Friday night “Lights of the Night” convoy and Saturday afternoon “Rides of Pride” parades were donated to REACH Relief and Make-A-Wish, respectively.  The REACH Relief auction for the Lights of the Night Convoy happened Friday afternoon, with the parade starting at 9:30 PM.  The last truck was not parked until 2:30 AM!  The Saturday Rides of Pride started at 3:00 PM, with all the trucks returning and parked by 5:30 PM.  The Parade Marshall for the Friday night and Saturday afternoon parades was Josh Lemke.

Prior to the parade, I took out my trusty iPhone camera and DJI gimbal to take remote videos of selected trucks and the Friday night parade.  I was able to get good footage as trucks were leaving the Community Center parking lots.  This parade is one of my favorite activities of the weekend, as the combination of the lights, beautiful bobtails, and combos is an incredible sight at night.

Also on display for the weekend were two trailers that contained the names of people who have played an important role in the WTNS since its inception and passed on.  Sadly, The Legend, our friend Troy Huddleston, was added to the board this year.

In every truck show report I write, I always make it a point to recognize the sponsors and vendors who participate in the truck show.  They are the lifeblood for a successful event.  Following is a list of the vendors who had displays and contributed to this year’s show – ATHS Southern Chapter, ATHS Brew City Chapter, Big Rig Chrome Shop, Bumper Girl LLC, California Custom Products, Collinsville Sweet Wheels, EH Wolfs and Sons, Homer’s Towing & Custom Chrome Shop, JX Enterprises/Peterbilt, Make-A-Wish, NHH Services, Meyer’s Pressure Washers, Pomp’s Tires, Sam’s Little Red Wagon, Renegade Products, Say Cheese, Seminar Guy, Tim’s Sports Blocks, Truck Country, Waupun Truck’n Show Apparel, and Women in Trucking.  A huge thank you goes out to all these sponsors and vendors for their ongoing dedication and contributions!

Where there are big trucks and crowds, there will also be a variety of good food vendors to keep everyone well fed and satisfied.  Once again, the Fox Lake Sno-Blazers Snowmobile Club,  located in the north-end of the WCC, provided a variety of food for purchase throughout the entire weekend.  Friday evening the well-known fish fry took place with a three-piece cod dinner and sides of potato salad, coleslaw, and bread.  For a very reasonable price, you got a great meal.

Another popular food event at the WTNS is the Saturday morning Lions Club breakfast.  I tried the pancake breakfast for the first time this year.  The pancakes, and especially the sausage, were excellent.  If you want very tasty pizza and Italian food, a short golf cart ride or walk to Tony’s Pizza and Italian Restaurant is well worth the trip!

Music always contributes to a fun and successful truck show event.  Two excellent bands provided the evening entertainment both Friday and Saturday evening.  Star Six Nine played on Friday night and The Presidents performed on Saturday night, entertaining audiences in the WCC with a great selection of country, 80s, classic, and southern rock.  I made it a point to listen to both bands, and thoroughly enjoyed their music.

Having over 100 awards at this truck show, there were obviously a lot of winners (too many to list them all here).  However, following is a list of Specialty and best of category winners.  The Best of Show/Diamond Class was awarded to One of a Kind Customs, the Best of Show/Diamond Class Working Class winner was Brian Dreher Trucking, and the Best of Show/Chrome Class was Extreme Transportation.  In the Best of Show Lights/Modified Class, the winner was Always Haulin, while the Best of Show Lights/DOT Certified Class went to Josh Van Wagoner.  The Largest Fleet Award went to Triple V Transport, the Mayor’s Choice went to Pete Transport, and the Ron Vande Zande Memorial Trophy was given to Josh Van Wagoner.  The Bernie Werra Memorial Trophy was presented to Perry Fromm.

Another activity that happens during the truck show weekend is the Milk Truck competition and judging.  The awards ceremony for the milk trucks took place on Friday evening.  The 1st place winners were Kevin Retzlaff with KR Transport and Jeremy Swisher with Leege Trucking.  I’m not as familiar with the milk trucks as I am their 18-wheel counterparts, but I do know that the owners of these trucks take as much pride in their ride as those with more wheels and trailers.

All the plaques and trophies were donated by 36 trucking companies, many local businesses, and individuals.  A big thanks to the truck show participants and 25 judges who performed the daunting task of judging almost 260 bobtails and combos throughout the weekend.

I would like to recognize the 16 members of the Waupun Truck’n Show Committee for planning, organizing, and executing another great show.  Special recognition to Duey Vande Zande, Randy Bille, and Brenda Douma for all their assistance.  I would also like to thank Nancy Kutschenrauter for providing me a list with all the award winners from the weekend.  I’m looking forward to an even bigger and better Waupun Truck’n Show in 2023, and I know they will once again reach for success!